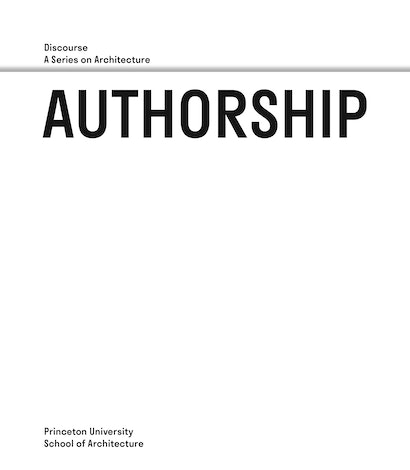 Authorship critically examines emergent themes in contemporary architecture by revisiting the seemingly defunct notion of design authorship. As we revel in the death of the master architect, how do we come to terms with the shifting role of creativity in architecture’s cultural production? In Authorship, a cross-disciplinary group of designers and scholars explores this topic through a myriad of lenses. Subjects include the impact of digital tools and computational scripts on the conception of buildings in the age of robotics, the current climate of appropriation and sampling as a counter-form of authorship, and the rise of reauthored materials in a postdigital age. These questions are cast against alternative ideas of authorship that, in turn, reposition the history of architecture. Featured essays investigate the separation between the personal and the authored while other contributions expose meaning, symbolism, and iconography as the subjects of authority—not authorship. Ultimately, this book dismantles, realigns, and reassembles disparate architectural conditions to form new ways of thinking.

Discourse is a biannual publication series that presents timely themes on and around architecture. A selective compilation of essays, interviews, roundtable discussions, featured exhibitions, photo-essays, and collateral materials—such as architectural models, sketches, and built works—highlight architectural culture, practice, and theory.