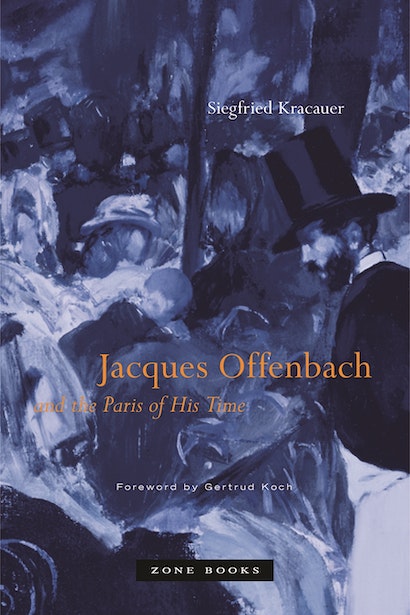 Siegfried Kracauer’s Jacques Offenbach and the Paris of His Time brilliantly reconfigures the biography form into a remarkable work of social and cultural history. In a book that has frequently been compared with Walter Benjamin’s Arcades Project, Kracauer uses the life and work of Offenbach to assemble a penetrating portrayal of Second Empire Paris.

By examining the superficiality and mystification of collective experience, Kracauer provides the reader with a revelatory “physiognomy” of social reality itself. Offenbach’s immensely popular operettas have long been seen as part of the larger historical amnesia and escapism in the aftermath of 1848. But Kracauer insists that Offenbach’s productions have to be understood as more than simply glittering distractions.

The fantasy realms of his operettas, occurring amid the urban renewal of Baron Haussmann and the fanfare of Universal Expositions, were on the one hand fully continuous with the unreality of Napoleon III’s imperial masquerade, but on the other made a mockery of the pomp and pretenses surrounding the apparatuses of power. His music “originated in an epoch in which social reality had been banished by the Emperor’s orders, and for many years it flourished in the gap that was left.”

Offenbach’s dreamworlds were embedded with a layer of utopian content that can be seen as an indictment of the fraudulence and corruption of the times. This book will be essential reading for anyone interested in modern critical and cultural studies. This edition includes Kracauer’s preface to the original German edition, translated into English for the first time, and a critical foreword by Gertrud Koch.

“From Siegfried Kracauer, a neglected gift: his ardent, intensely readable offenbachiade. The river of melody — and wit — which Jacques Offenbach sent coursing through the capital of the nineteenth century continues to enchant lovers of music and of intelligence. Kracauer honors those pleasures as well as the fascinating social history revealed in this account of Offenbach’s life and the controversies that surrounded him.”— Susan Sontag