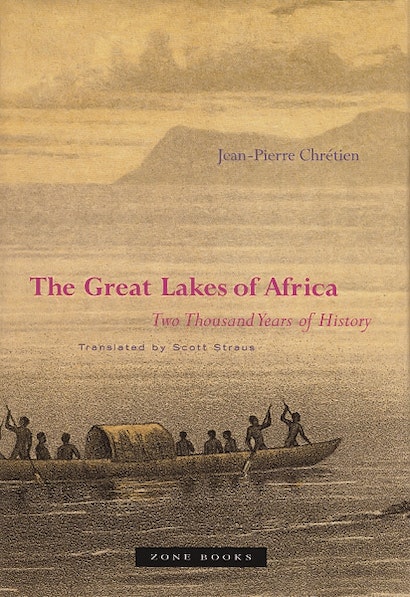 Although the genocide of 1994 catapulted Rwanda onto the international stage, English-language historical accounts of the Great Lakes region of Eastern Africa are still scarce. Drawing on a wide range of sources — colonial archives, oral tradition, archaeological discoveries, studies in anthropology and linguistics, and his thirty years of scholarship — Jean-Pierre Chrétien offers a major synthesis of the history of the region, which encompasses Rwanda, Burundi, Uganda, Eastern Congo, and Western Tanzania, a region still plagued by extremely violent wars.

The Great Lakes of Africa: Two Thousand Years of History first retraces the human settlement and the formation of kingdoms around the sources of the Nile, which were “discovered” by European explorers around 1860. Chrétien then describes these kingdoms’ complex social and political organization and analyzes how the colonizers — German, British, and Belgian — not only transformed and exploited the existing power structures, but also projected their own racial categories onto them.

Finally, the author shows how the independent states of the postcolonial era, in particular Rwanda, Burundi, and Uganda, have been trapped by their colonial and precolonial legacies, and especially by the racial rewriting of the latter by the former. Today, argues Chrétien, the Great Lakes region of Africa is crucial for historical research: not only because its history is particularly fascinating but also because the tragedies of its present are very much a function of the political manipulations of its past.

"Mr. Chrétien’s extraordinary book undertakes the formidable task of tracing the roots of the region’s violence and exposing the ideological myths on which the ancient-hatreds theory rests…a monumental study that marches through two millenniums before approaching central Africa’s contemporary agony."—The New York Times