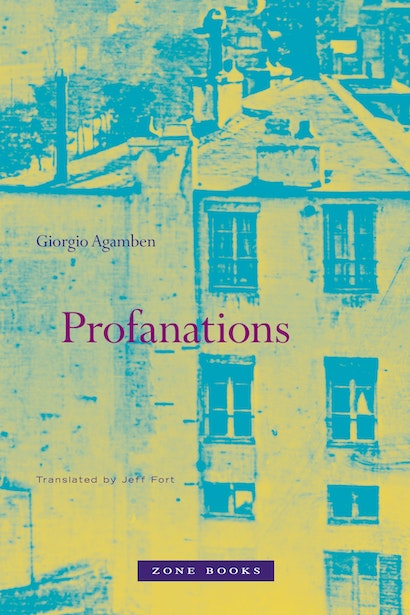 The Italian philosopher Giorgio Agamben has always been an original reader of texts, understanding their many rich and multiple historical, aesthetic, and political meanings and effects. In Profanations, Agamben has assembled for the first time some of his most pivotal essays on photography, the novel, and film. A meditation on memory and oblivion, on what is lost and what remains, Profanations proves yet again that Agamben is one of the most provocative writers of our times.

In ten essays, Agamben rethinks approaches to a series of literary and philosophical problems: the relation between genius, ego, and theories of subjectivity; the problem of messianic time as explicated in both images and lived experience; parody as a literary paradigm; the potential of magic to provide an ethical canon.

The range of topics and themes addressed here attest to the very creativity of Agamben’s singular mode of thought and his persistent pursuit to grasp the act of witnessing, sometimes futile, sometimes earth-shattering — the talking cricket in Pinocchio; “helpers” in Kafka’s novels; pictorial representations of the Last Judgment, of anonymous female faces, and of Orson Wells’s infamous object of obsession Rosebud. “In Praise of Profanity,” the central essay of this small but dense book, confronts the question of profanity as the crucial political task of the moment.

An act of resistance to every form of separation, the concept of profanation — as both the “return to common usage” and “sacrifice” — reorients perceptions of how power, consumption, and use interweave to produce an urgent political modality and desire: to profane the unprofanable. In short, Agamben provides not only a new and potent theoretical model but also a writerly style that itself forges inescapable links between literature, politics, and philosophy.

"Whether this will be your first, fourth, or fourteenth experience reading essays by Giorgio Agamben, you will find his most recent collection, Profanations, to be of enormous use."—Rain Taxi

"Superficially, this collection of essays appears charmingly miscellaneous. But across the divergence of theme and style, a subtle consistency builds between the different pieces. . . . It is a luminous and delightful book, sometimes sad and yearning, at others joyful with the busy concentration of a child."—Critical Quarterly