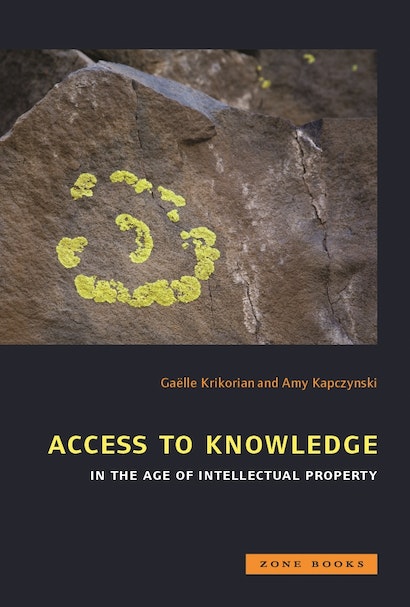 The end of the twentieth century saw an explosive intrusion of intellectual property law into everyday life. Expansive copyright laws have been used to attack new forms of sharing and remixing facilitated by the Internet. International laws extending the patent rights of pharmaceutical companies have threatened the lives of millions of people around the world living with HIV/AIDS. For decades, governments have tightened the grip of intellectual property law at the bidding of information industries.

Recently, a multitude of groups around the world have emerged to challenge this wave of enclosure with a new counterpolitics of “access to knowledge” or “A2K.” They include software programmers who take to the streets to attack software patents, AIDS activists who fight for generic medicines in poor countries, subsistence farmers who defend their right to food security and seeds, and college students who have created a new “free culture” movement to defend the digital commons.

In this volume, Gaëlle Krikorian and Amy Kapczynski have created the first anthology of the A2K movement, mapping this emerging field of activism as a series of historical moments, strategies, and concepts. Intellectual property law has become not only a site of new forms of transnational activism, but also a locus for profound new debates and struggles over politics, economics, and freedom. This collection vividly brings these debates into view and makes the terms of intellectual property law legible in their political implications around the world.

"Like so much within the A2K debates, this comes down to a matter of opinion, political stance, economic position, and more; in short, how one views the present social reality, and what one holds as a social ideal. This collection is vitally important, then, in that there is much here to help us make our opinions more informed ones, even while it illustrates how there are no easy answers to the relevant questions."—Rain Taxi Review of Books

“It’s hard to believe that the ‘definitive’ book has already been written about a movement as new as A2K. It’s even more unusual for an edited collection of essays to have the power of a monograph. But this collection of essays is both the definitive explanation of the access to knowledge movement and a beautifully constructed conversation about the various ideas, conceptual, political and organizational, that make it up. From Amy Kapczynski’s superb overview, to Yochai Benkler’s brilliant meditation on the commons, to Lawrence Liang’s superbly titled ‘The Man Who Mistook His Wife for a Book,’ the central ideas of A2K are laid out with a freshness and power that is remarkable. And the rest of the contributors in the essays gathered here are just as strong. This is a must-have for university libraries, but it is also something that will be read intently, tactically, and sometimes uneasily, in venues ranging from WIPO to the university classroom. Highly recommended.”— James Boyle, Duke University, author of The Public Domain

“This is the first book of its kind. It comprehensively describes the intellectual contours of a powerful and emerging social movement and serves as a handbook for activism. The A2K movement is disparate and diverse. So assembling a volume that takes account of its various strands and influences is no small task. Gaëlle Krikorian and Amy Kapczynski have selected works from the most influential writers and practitioners of this new distributed politics. I will certainly assign this book to my survey course next year.”— Siva Vaidhyanathan, University of Virginia, author of The Googlization of Everything