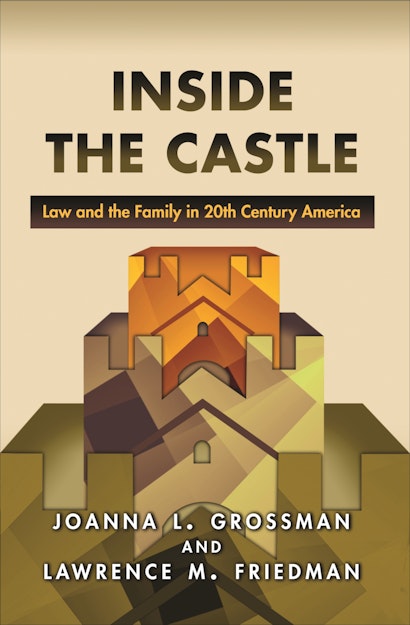 Inside the Castle is a comprehensive social history of twentieth-century family law in the United States. Joanna Grossman and Lawrence Friedman show how vast, oceanic changes in society have reshaped and reconstituted the American family. Women and children have gained rights and powers, and novel forms of family life have emerged. The family has more or less dissolved into a collection of independent individuals with their own wants, desires, and goals. Modern family law, as always, reflects the brute social and cultural facts of family life.

The story of family law in the twentieth century is complex. This was the century that said goodbye to common-law marriage and breach-of-promise lawsuits. This was the century, too, of the sexual revolution and women’s liberation, of gay rights and cohabitation. Marriage lost its powerful monopoly over legitimate sexual behavior. Couples who lived together without marriage now had certain rights. Gay marriage became legal in a handful of jurisdictions. By the end of the century, no state still prohibited same-sex behavior. Children in many states could legally have two mothers or two fathers. No-fault divorce became cheap and easy. And illegitimacy lost most of its social and legal stigma. These changes were not smooth or linear—all met with resistance and provoked a certain amount of backlash. Families took many forms, some of them new and different, and though buffeted by the winds of change, the family persisted as a central institution in society. Inside the Castle tells the story of that institution, exploring the ways in which law tried to penetrate and control this most mysterious realm of personal life.

Joanna L. Grossman is professor of law at Hofstra University and the coeditor of Gender Equality. Lawrence M. Friedman is the Marion Rice Kirkwood Professor of Law at Stanford University. His books include A History of American Law.

"The history of American law is the story of the American family. The book describes how the law both reflects and seeks to mold conceptions of what a family is and who its members are. . . . The conclusion is that the family has undergone dramatic change in America since 1787, and will evolve as new social practices emerge."—Choice

"Inside the Castle is a well-written and thoroughly researched work of legal history that touches on nearly every aspect of American family life. The book is also well organized, with a cogent arrangement of topics. Useful summaries at the end of each chapter list significant points and note questions that remain to be answered. The book's index is thorough, and its comprehensive endnotes should prove valuable for those interested in further research. Inside the Castle is recommended for all public, academic, and law libraries and for anyone with an interest in family law or social history."—Ellen M. Richardson, Law Library Journal

"It provides a comprehensive, engaging, accurate, and intriguing account of a century of almost unimaginable change. It will be of interest to a wide variety of readers, from students to people who love a good read about an important topic."—Barbara Bennett Woodhouse, American Historical Review

"Inside the Castle is an expansive and careful study of the intricate relationship between family law and society, and the influence of the latter on the former. It is impressive in both its scope and depth."—Zvi H. Triger, Law and Politics Book Review

"The book offers a broad panorama with careful attention to well-documented historic detail. . . . [It] is very well written and well documented. I recommend it to anyone looking for a good examination of the varieties of marriage in the contemporary United States."—John A. Dick, Marriage, Families & Spirituality

"This wonderful history of twentieth-century family law blows like a strong fresh wind through the fog of myth that pervades debates over traditional families and their decline. Deeply learned but also clear and lively, this book explains how the law of marriage, divorce, parentage, and inheritance has responded to social changes that have eroded old bonds of intimacy and dependence while creating new ones. This is simply the best overview of family law in print."—Robert W. Gordon, Yale Law School

"Grossman and Friedman provide the first complete and reliable survey of American family law in the twentieth century. Along the way, they offer an unusually expansive portrait of how the law has changed and suggestive explorations of many of the recent transformations to American family life. Marriage, divorce, sex, domestic violence, care, and the intergenerational transmission of wealth all fall within their view. Inside the Castle will be the essential starting point for anyone interested in learning about the subject for years to come."—Hendrik Hartog, Princeton University

"This is a bold, ambitious, and remarkably comprehensive book. Moving beyond the legal community and providing a window into the actual functioning of America's diverse families, this book shows that family law isn't so much generated by judges and legislators, but by ordinary and extraordinary individuals."—Steven Mintz, Columbia University

"Effectively organized and wonderfully accessible, this engrossing book illuminates the enormous transformations experienced by families, and the laws governing them, in the twentieth century. I know of no other book that provides such a broad overview and I am deeply impressed by its stellar scholarship."—Naomi Cahn, George Washington University Law School