How tort, contract, and restitution law can be reformed to better serve the social good 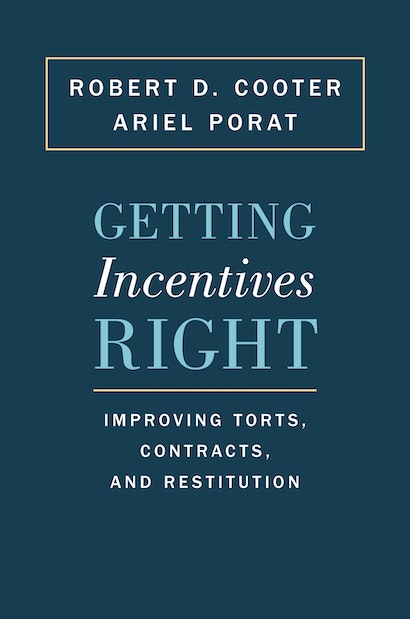 Lawyers, judges, and scholars have long debated whether incentives in tort, contract, and restitution law effectively promote the welfare of society. If these incentives were ideal, tort law would reduce the cost and frequency of accidents, contract law would lubricate transactions, and restitution law would encourage people to benefit others. Unfortunately, the incentives in these laws lead to too many injuries, too little contractual cooperation, and too few unrequested benefits. Getting Incentives Right explains how law might better serve the social good.

In tort law, Robert Cooter and Ariel Porat propose that all foreseeable risks should be included when setting standards of care and awarding damages. Failure to do so causes accidents that better legal incentives would avoid. In contract law, they show that making a promise often causes the person who receives it to change behavior and undermine the cooperation between the parties. They recommend several solutions, including a novel contract called “anti-insurance.” In restitution law, people who convey unrequested benefits to others are seldom entitled to compensation. Restitution law should compensate them more than it currently does, so that they will provide more unrequested benefits. In these three areas of law, Getting Incentives Right demonstrates that better law can promote the well-being of people by providing better incentives for the private regulation of conduct.

"Getting Incentives Right does just as the book's title says, and does so in a way that will startle and educate novices as well as seasoned economists and lawyers, not to mention law professors and their students. The book guides readers to places where multiple parties and margins are accounted for, casting brilliant light on important legal problems."—Saul Levmore, University of Chicago Law School

"Courts should get incentives right when developing rules in tort, contract, and restitution law. But even after decades of scholarship, commentators have only a vague idea as to what the right incentives are. Cooter and Porat put their powerful imaginations to work in a book full of surprising insights and compelling arguments about improving these areas of law. This lucid book will appeal to both the novice and expert."—Eric Posner, University of Chicago

"This timely book presents Cooter and Porat's full perspective on the challenges that three important bodies of law—torts, contracts, and restitution—face in inducing optimal behavior. The result is a unique book that I have no doubt will become one of the leading texts in its field. Thought-provoking, original, and useful, it fills a void in the current legal literature."—Ehud Guttel, Hebrew University Law School

"Cooter and Porat are the most innovative and inspirational law and economics scholars of our generation. More than anyone else, they are good at identifying ideas, problems, and solutions that cut across subject areas. This book brings them together to unveil common threads and exploit analytical synergies between different concepts. This is a work that every scholar in the field and every respectable academic library will want to own."—Francesco Parisi, University of Minnesota Law School and University of Bologna