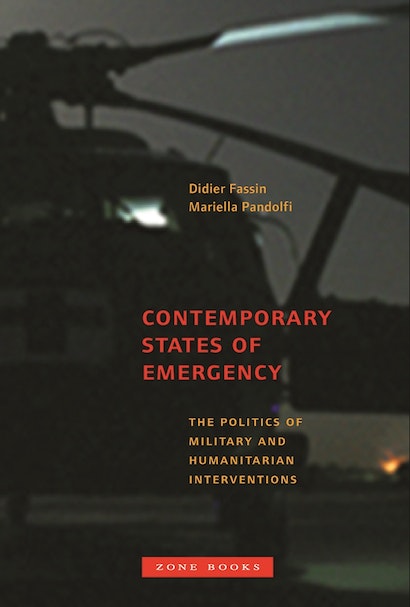 From natural disaster areas to zones of conflict around the world, a new logic of intervention has emerged. This new post-Cold War international order combines military action and humanitarian aid, conflates moral imperatives and political arguments, and confuses the concepts of legitimacy and legality. The mandate to protect human lives, however and wherever endangered, has thus promoted a new form of military and humanitarian government that operates in a temporality of urgency, moving from one crisis to the next, applying the same battery of technical expertise — from army logistics to epidemiological management to the latest administrative tools for forging “good governance.” In the name of the right to intervene, this new strategy challenges national sovereignties and deploys economic powers. Not only does it take charge of people’s lives, it also reduces their histories and expectations to bare lives to be rescued.

Drawing on the critical insights of anthropologists, legal scholars, political scientists, and practitioners from the field, Contemporary States of Emergency first examines the historical antecedents as well as the moral, juridical, ideological, and economic conditions that have made military and humanitarian interventions possible today. It then addresses the practical process of intervention in global situations on five continents, illustrating the diversity as well as the parallels between contemporary forms of military and humanitarian interventions.

Finally, it investigates the ethical and political consequences of the generalization of states of emergency and the humanitarian government that they entail. The authors thus seek to understand a critical question that confronts the world today: How and why have military and humanitarian interventions transformed the international order such that what was once a logic of exception has now become the rule of contemporary global politics?

"[This volume] brings together an extraordinarily broad range of scholars and activists, writing on a very wide range of topics which are framed by Fassin and Pandolfi’s impressive legal survey of the gradual development of ‘the state of emergency’ as an example of Agamben’s (1995) notion of the ‘state of exception.’… [A] compelling volume."—Somatosphere

“This superb collection focuses attention on the changing categories and modalities of humanitarianism, human rights, and security — using key examples from the Balkans, Australia, Palestine, Venezuela, Somalia, and Indonesia to explore how states of emergency become persistent tutelary and militarized governance, but also how grey zones of passion and reason, and different moments of military intervention, humanitarian aid, security concerns, and foreign investments become mutually implicated. We live in a new moral universe, where humanitarianism raises as many troubling issues as it claims to solve.”— Michael M. J. Fischer, author of Anthropological Futures and Emergent Forms of Life and the Anthropological Voice

“Through the rigorous work of multidisciplinary analysis, the figure of intervention acquires, in this magisterial volume, its full significance. Marking out and exploring — at times undoing — the fragile lines that separate ethics from politics, politics from scholarship, and justice from the military pursuit of good (and evil), each contribution, here assembled with impressive acumen by Mariella Pandolfi and Didier Fassin, constitutes a call to responsibility.”— Gil Anidjar, author of Semites: Race, Religion, Literature