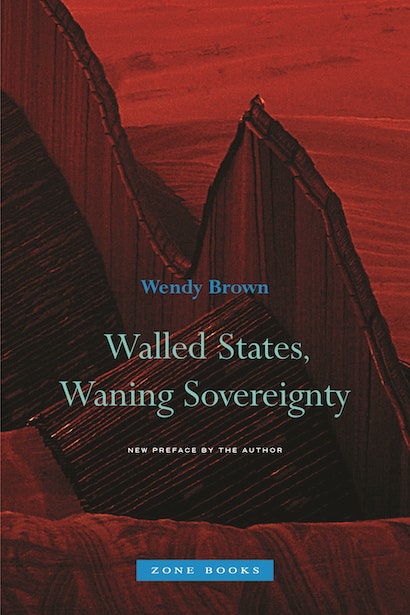 Why, just two decades after international celebrations of the fall of the Berlin Wall, are so many nation-states building elaborate walls at or near their borders? Why walls now, given growing global connectedness and given the general imperviousness of late modern powers — from capital to religion to terror — to physical blockading? How do walls shore up an imago of sovereign statehood and to what extent do they fortify reactionary national imaginaries? What do the new walls perform symbolically, materially, psychically?

In Walled States, Waning Sovereignty, Wendy Brown reflects on the proliferation of nation-state walls in a time of eroded nation-state sovereignty and intensifying transnational powers unleashed by globalization. A leading theorist of neoliberalism, Brown argues that although the new walls may demarcate existent or aspirational nation-state boundaries, they do not arise as fortresses against invading national armies or even as articulations of sovereign statehood.

Rather, in a post-Westphalian context of increasing nonstate transnational actors and powers, the new walls consecrate the very boundary corruption they would contest as well as signify the contemporary limitations of national and global governance by law or political dictate. Even as walls theatrically display nation-state sovereignty, they index with equal force the decline of sovereign state power.

In a rare combination of powerful theory and precise historical, political, and economic analysis, Walled States, Waning Sovereignty provides a new — indeed the first — account of nation-state walling as a distinctive contemporary phenomenon. For Brown, the frenzy of wall building today reveals crucial predicaments of political power and desire emerging from the waning of sovereignty, including new political legitimacy deficits, new citizen anxieties, and new fusions of state and non-state violence.

“An instant classic that foretold the global turn to border walls, this revised edition is required reading for anyone interested in how the world works in the twenty-first century.”— Reece Jones, author of Violent Borders

“Walled States, Waning Sovereignty examines our era’s proliferation of walls within and, especially, between nation-states, treating them as iconographic of contemporary predicaments of state power in an era of declining state sovereignty. The book moves compellingly from an analysis of walls, to a survey of the conceptualization of sovereignty in relation to territory, to an account of sovereignty’s recent transformations, to theorizing the desires and fantasies that animate the building of walls. Even as she finds illumination in, and provides brilliant commentary on, the works of Hobbes, Marx, Schmitt, Freud, and others, Brown presses us to think afresh about the challenges faced by contemporary democratic and radical struggles.” — Mark Reinhardt, author of Who Speaks for Margaret Garner?

“As Britain withdraws from the European Union and as the theater of sovereignty finds a home in the White House, Brown’s thesis about nation-state walling remains as pertinent now as it was when first published. A trenchant diagnosis of our contemporary political geography, Walled States, Waning Sovereignty is an indispensable resource for any serious inquiry into migration, financialization, bordering, racialization, even climate change and the Anthropocene.” — Andrew Baldwin, co-editor of Life Adrift: Climate Change, Migration, Critique

“Brown argues brilliantly that the proliferation of walls around the globe marks the rise of a reactionary nationalist populism operating in tandem with postnational neoliberal technologies of governmentality. Together these forces are eroding what remains of a democratic ethos. Walled States, Waning Sovereignty exposes an underlying logic of our era and provides a theoretical toolkit for those fighting for a more egalitarian world.”— Neve Gordon, co-author of The Human Right to Dominate