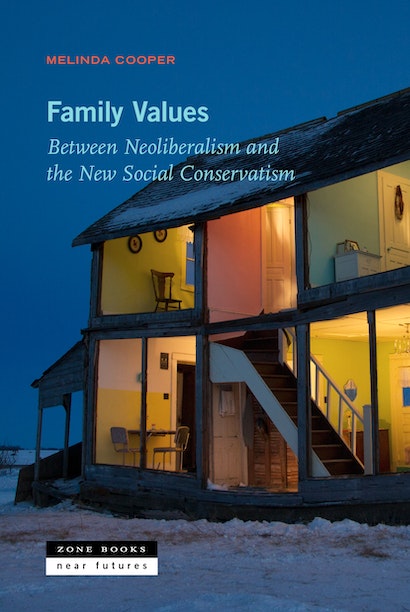 Why was the discourse of family values so pivotal to the conservative and free-market revolution of the 1980s and why has it continued to exert such a profound influence on American political life? Why have free-market neoliberals so often made common cause with social conservatives on the question of family, despite their differences on all other issues?

In this book, Melinda Cooper challenges the idea that neoliberalism privileges atomized individualism over familial solidarities, and contractual freedom over inherited status. Delving into the history of the American poor laws, she shows how the liberal ethos of personal responsibility was always undergirded by a wider imperative of family responsibility and how this investment in kinship obligations recurrently facilitated the working relationship between free-market liberals and social conservatives.

Neoliberalism, she argues, must be understood as an effort to revive and extend the poor law tradition in the contemporary idiom of household debt. As neoliberal policymakers imposed cuts to health, education, and welfare budgets, they simultaneously identified the family as a wholesale alternative to the twentieth-century welfare state. And as the responsibility for deficit spending shifted from the state to the household, the private debt obligations of family were defined as foundational to socio-economic order. Despite their differences, neoliberals and social conservatives were in agreement that the bonds of family needed to be encouraged — and at the limit enforced — as a necessary counterpart to market freedom.

In a series of case studies ranging from Clinton’s welfare reform to the AIDS epidemic, and from same-sex marriage to the student loan crisis, Cooper explores the key policy contributions made by neoliberal economists and legal theorists. Only by restoring the question of family to its central place in the neoliberal project, she argues, can we make sense of the defining political alliance of our times, that between free-market economics and social conservatism.

"Cooper’s book leaves us with a bleakly realistic account of the (often Christian) rightwing patriarchal forces whose resoundingly angry response to feminist and pro-welfare activism has sought to stifle the impact of the women’s movement from the 1960s onwards, especially in regard to economic, racial and reproductive freedoms. One might assume that similar ideas are at work in the Trump administration today. Under the weight of such antagonism the tenacity of feminism is nothing short of miraculous, and Cooper’s sombre analysis serves to remind the pro-feminist left and the women’s movement of how few in number we are, and have been."—Angela McRobbie, openDemocracy

“Melinda Cooper brings sharp feminist insights to clarify a range of topics in ‘everyday neoliberalism’ overlooked in the earlier literature . . . . This history is vital for an understanding of the modern neoliberal order.” — Philip Mirowski, author of Never Let A Serious Crisis Go To Waste

“This is the book I’ve been waiting for….This brilliantly argued synthesis leaves no room for left critique that cannot recognize sexual normativity as the keystone of both neoliberal and socially conservative efforts to contain the most radical redistributive potential of liberation movements.” — Bethany E. Moreton, author of To Serve God and Wal-mart: The Making of Christian Free Enterprise

“In this intellectual tour de force that combines rigorous empirical evidence with breathtaking theoretical finesse, Melinda Cooper argues that neo­liberal economics breeds multiple forms of fundamentalism as well as structural inequalities that hit the most intimate aspects of our existence . . . . An absolute must read.” — Rosi Braidotti, author of The Posthuman