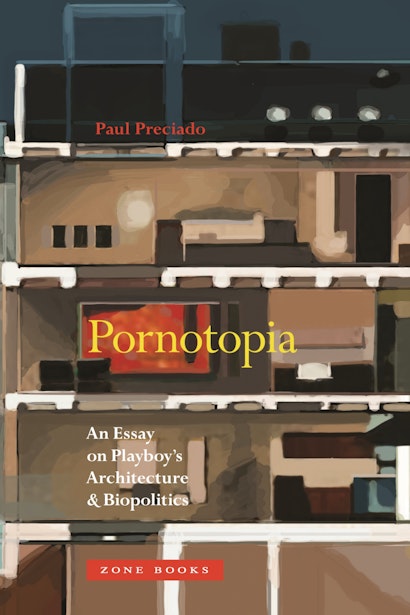 Published for the first time in 1953, Playboy was not only the first pornographic popular magazine in America; it also came to embody an entirely new lifestyle through the construction of a series of utopian multimedia spaces — from the Playboy Mansion and fictional Playboy’s Penthouse of 1959 to the Playboy Clubs and hotels appearing around the world in the 1960s. Simultaneously, the invention of the contraceptive pill provided access to a biochemical technique that separated (hetero) sexuality and reproduction.

Addressing these concurrent cultural shifts, Paul Preciado investigates the strategic relationships between space, gender, and sexuality in popular sites related to the production and consumption of pornography that have tended to reside at the margins of traditional histories of architecture: bachelor pads, multimedia rotating beds, and design objects, among others.

"Compellingly written and funny as well as troubling, Pornotopia is certainly one of the architectural highlights of the year."—Times Higher Education

“Better known as a theoretical provocateur in gender and sexuality studies, Beatriz Preciado reveals her architectural training in this fascinating book about the built spaces of Playboy magnate Hugh Hefner’s bunny empire, and the cultural fantasies they materialize. Pornotopia is a genre-busting work that implodes traditional distinctions between topics and fields in an entertaining and enlightening fashion. Serious scholars of architecture and culture should have it on their bookshelves next to works by Joel Sanders, Beatriz Colomina, Annmarie Adams, Mark Wigley, and Bernard Tschumi.” — Susan Stryker, Director, Institute for LGBT Studies, University of Arizona

“Linking masculinity to domesticity, Playboy Bunnies to Barbies, and pornography to new orders of the political, Preciado rewrites the history of sexuality in terms of a radical reorientation of interiority and exteri­ority. With equal parts daring, nerve, and sheer originality, Preciado describes, theorizes, and explains the emergence of a new spatialization of sex, a pornotopia no less, that exceeds Hugh Hefner’s Playboy universe and comes to describe the arrangements of bodies and buildings within modernity. Breathtaking!” — Jack Halberstam, author of The Queer Art of Failure and Gaga Feminism