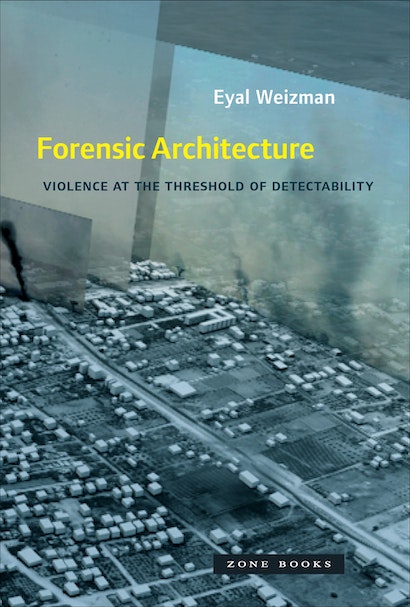 Beyond shedding new light on human rights violations and state crimes across the globe, Forensic Architecture has also created a new form of investigative practice that bears its name. The group uses architecture as an optical device to investigate armed conflicts and environmental destruction, as well as to cross-reference a variety of evidence sources, such as new media, remote sensing, material analysis, witness testimony, and crowd-sourcing.

In Forensic Architecture, Eyal Weizman, the group’s founder, provides, for the first time, an in-depth introduction to the history, practice, assumptions, potentials, and double binds of this practice. The book includes an extensive array of images, maps, and detailed documentation that records the intricate work the group has performed.

Included in this volume are case studies that traverse multiple scales and durations, ranging from the analysis of the shrapnel fragments in a room struck by drones in Pakistan, the reconstruction of a contested shooting in the West Bank, the architectural recreation of a secret Syrian detention center from the memory of its survivors, a blow-by-blow account of a day-long battle in Gaza, and an investigation of environmental violence and climate change in the Guatemalan highlands and elsewhere.

Weizman’s Forensic Architecture, stunning and shocking in its critical narrative, powerful images, and daring investigations, presents a new form of public truth, technologically, architecturally, and aesthetically produced. Their practice calls for a transformative politics in which architecture as a field of knowledge and a mode of interpretation exposes and confronts ever-new forms of state violence and secrecy.

"As the director of Forensic Architecture, Weizman has invented a new academic discipline, perhaps even a whole new science, a committed, engaged, citizen science. . . . Weizman has found a way to harness our everyday digital diversions, for a fierce, moral purpose."—Wired

"This forensic process—what Weizman calls ‘architecture in reverse’—shows how the analytical and presentational skills of architects can be deployed in graphic, damning detail, in circumstances that extend way beyond the comfort zone of the drawing board."—Guardian

"The perspective shift he offers is no less than the image of a planet overrun by human machinations. Weizman presents the idea of human history written only by and for nation states, not their people. When we conceive of justice for ourselves and the world, that lens is always prefigured for the state viewpoint. But perhaps through experts like Weizman and his colleagues at Forensic Architecture, total control of that lens can be wrested little by little, to accommodate those who need it most."—New Scientist

"Forensic Architecture highlights critical issues that must be discussed, as uncomfortable as they make people feel…. The book exposes readers to a candid, much-needed understanding of the relationship between settlements, architecture, politics, and violence. This awareness is even more important in developed countries whose advocacy is necessary for wrongdoings like those described within the book to be recognized."—Spacing

“The investigative work of Eyal Weizman and his colleagues at Forensic Architecture is truly remarkable, breaking novel theoretical ground while actively supporting struggles for justice. Again and again, landscapes of power, violence, resistance, and ecological stress are transformed in stunning new ways. Among the many revelations in these pages is a new mapping of the connections between climate change, drought, drones, and armed conflict. These are powerful analytic tools that will be indispensable to the construction of a new human rights framework.”— Naomi Klein, author of This Changes Everything and The Shock Doctrine

“Analyzing the vast bank of images provided by social media in conflict zones through a computation of differential parallaxes, Forensic Architecture is fast becoming the most efficient visual machine against the suppression of evidence by the authors of crimes against humanity. Recent history tells us that its work will be evermore needed.”— Yve-Alain Bois, Professor of Art History, Institute for Advanced Study

“In a world where environmental crimes are increasingly linked to human rights violations, Forensic Architecture has become an essential practice. Weizman and his team have understood how the tools of science and architecture can influence and transform the juridical system.” — Baltasar Garzón, former Spanish investigating judge and president of the human rights foundation FIBGAR