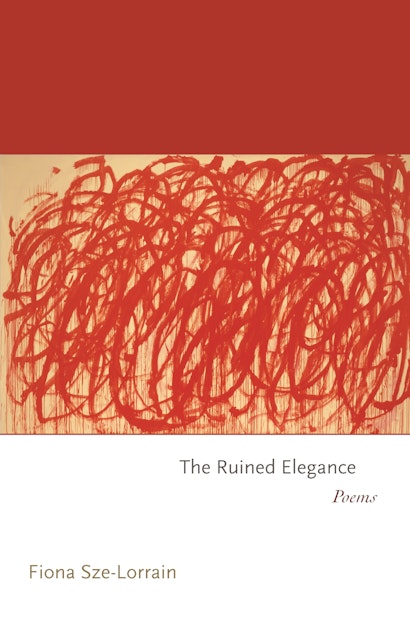 The Ruined Elegance
Available in 3 editions
Buy This

Fiona Sze-Lorrain is a poet, literary translator, editor, and zheng harpist. In her new collection—an intercultural journey that traces lives, encounters, exiles, and memories from France, America, and Asia—she offers a nuanced yet dynamic vision of humanity marked by perils, surprises, and transcendence. Recently she took the time to answer some questions about The Ruined Elegance.

Can you speak a little about your writing process or how these poems came about?

FS: Almost every poem in this collection behaved like a beast. I lost whenever I tried to fight it, until I realized how far I missed the mark. “To question the options of elegy, I’ve probably chosen the wrong epic.” [from the poem “Back from the Aegean Sea”] Several verses and their poetic narratives were deviating at the start, in part because I had tried to be clever about a “lyric/anti-lyric.” I wanted silence and music. What better paradox could there be? It did feel like a crisis when I could only pick these poems up from their “ruins.” I censored words and images even before saying them out loud or putting them down on the page. Part of my illusion had to do with my folly of “writing to tame vulnerability and speechlessness” on the page. While finding ways to cope, I felt drawn to reading poems that were gentle yet could sustain a certain emotional rawness and moral jolt. To recenter myself, I walked — from one arrondissement to another.

What colors come to mind when you revisit the poems in The Ruined Elegance?

FS: Violet, vermillion, and shades of gray-green. No vintage “black and white.”

FS: Because I hope to have the poems operate beyond witnessing, documenting or commenting about their socio-historical sources, even if some of the thematic concerns relate to specific political events — these poems believe in history, but they don’t live in the past.

Why poetry?  What would you like to be if you weren’t a poet, literary translator, or zheng harpist?

FS: I didn’t plan to “be a poet.”  Poems and Bach bring me as much joy as doubt, though sometimes not as much company as would horses and trees. Why poetry — because it can still resist greed and social constructs.  Were I not a poet or musician, I would like to play bridge professionally or practice herbology and phytotherapy.

What are some of your poetic influences?

Please offer some reading recommendations for our readers.

More information about The Ruined Elegance and Chapter one is available here.