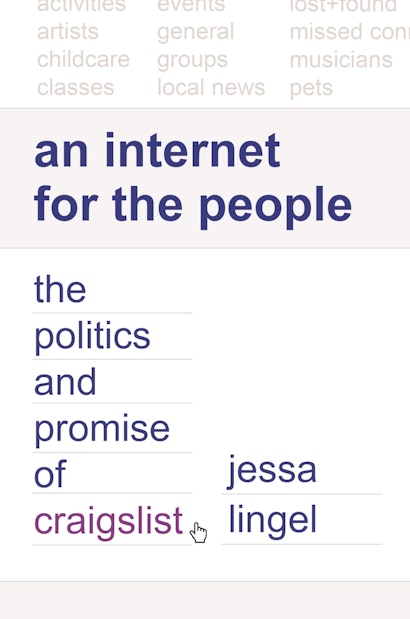 An Internet for the People
Available in 3 editions
Buy This

When I first started teaching undergrad courses on the internet and society, it was 2010.  Back then, students usually walked into the classroom with a fairly positive attitude about digital technology.  They saw the internet as a vital tool for democracy, an important way to network for future jobs and connect with their friends.  Flash forward ten years and my students have very different associations with the internet. Between election interference, fake news, surveillance and concerns about mental health, there are good reasons for students to be suspicious. I used to teach students how to see the internet more critically, to think about how it could create inequalities and support surveillance.  Now I try to steer students away from being too cynical, and show them when digital technologies have been fairer and more open. How did the internet get this way?  Could it be different in the future?

I used to teach students how to see the internet more critically, to think about how it could create inequalities and support surveillance.  Now I try to steer students away from being too cynical, and show them when digital technologies have been fairer and more open.

The need to come up with different narratives of digital politics is what drove me to study craigslist. People often think of craigslist more as a punchline than a serious topic of study. But in my research on digital culture, I’ve often been frustrated with the emphasis on studying the biggest platforms: Facebook, Google, twitter.  Are these the only platforms that matter?  Or do other sites and companies have important stories to tell? As a consumer and tech user, I’ve had other frustrations, like the monotony of business culture in Silicon Valley.  How is it that people who claim to be disruptive are remarkably on script for capitalist takeovers?  Why are profit margins always more important than a user’s freedom or privacy?  Does everyone really want to “move fast and break things”?  This is how I became fascinated with craigslist as a throwback to an earlier internet.

Online since 1996, craigslist has been incredibly successful.  It is the most popular platform, in any medium, at any time, for posting classified ads. It has more monthly page visits than The New York Times or ESPN.  It combines job seeking, apartment hunting, neighborhood watch, secondhand shopping and (until March of 2018) online dating.  Although there’s no publicly available information on how much craigslist is worth, estimates have run as high as a billion dollars.  Successful and longstanding, craigslist challenges basic ideas about what it takes to make it big online.

Craigslist is privately held, and from reviewing court cases, the company has never had more than three shareholders, with the largest shares owned by founder Craig Newmark and longstanding CEO Jim Buckmaster. While Craigslist will never see the huge stock option payoffs of successful startups, their financial independence also means that the company stays free from shareholder interference and priorities. Without having to kowtow to shareholders, craigslist’s leadership has more freedom to let early internet values dictate the company’s decisions.

Craigslist wears its politics on its leave – or rather, in its html. When craigslist first went online, it looked like every other website.  But after 25 years of minimal updates, craigslist has become an outlier in how it looks and feels.  Calling out craigslist for its throwback appearance isn’t a new critique. In 2006, an entire SXSW panel was dedicated to giving the website a makeover. When I first started interviewing craigslist users, I assumed it would be older folks who were most committed to the platform. While that was the case for some, I also interviewed a number of younger people who valued craigslist for its stability and simplicity.

Without venture capitalists and without changing its Web 1.0 appearance or policies, craigslist reminds us that there are many ways to be a successful internet company.

Without venture capitalists and without changing its Web 1.0 appearance or policies, craigslist reminds us that there are many ways to be a successful internet company.  The biggest weapon that mainstream tech has is the assumption that companies like Facebook are too big to fail and too successful to change.  When a company like craigslist stays weird and still makes it big, and turns a profit without selling out users, it helps build a case that the internet could be different: more democratic and transparent, less sanitized and homogenous.

Jessa Lingel is assistant professor of communication at the University of Pennsylvania. She is the author of Digital Countercultures and the Struggle for Community. She lives in Philadelphia.