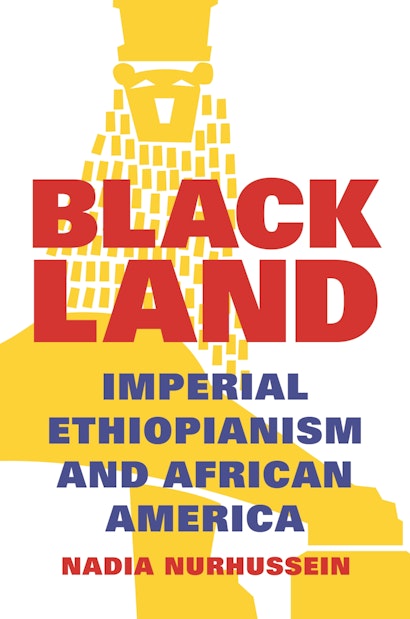 As the only African nation, with the exception of Liberia, to remain independent during the colonization of the continent, Ethiopia has long held significance for and captivated the imaginations of African Americans. In Black Land, Nadia Nurhussein delves into nineteenth- and twentieth-century African American artistic and journalistic depictions of Ethiopia, illuminating the increasing tensions and ironies behind cultural celebrations of an African country asserting itself as an imperial power.

What inspired you to write this book?

NH: Black Land was born from the intersection of scholarly and personal interests: my parents were born and raised in Ethiopia, and I’d always been curious about why so much of the African American literature I was studying invoked the figure of Ethiopia. Phillis Wheatley—enslaved and brought to America as a child—refers to herself in her poetry, for instance, not just as an African but an “Ethiop.” My book began simply with the question of why: what did the idea of Ethiopia offer African American writers and thinkers as they were crafting a literary and cultural tradition?

Black Land begins with the story of the Star Order of Ethiopia parade in Chicago. What does this event have to do with what you call “imperial Ethiopianism”?

NH: The parade—which ended in violence and with the execution of two of the parade’s organizers—struck me as an effective way into the book’s central question; it’s one of many events that we can look to in order to understand Ethiopianist performance in the United States. During the parade, a group identifying themselves as Abyssinians marched in the streets of Chicago wearing elaborate regal garments and burning American flags because, as the Chicago Commission on Race Relations understood it, they wanted to convey that “it was time to forswear allegiance to the American government and consider themselves under allegiance to the Abyssinian government.” Alongside formalized, scripted, staged theatrics such as W.E.B Du Bois’s Star of Ethiopia—a pageant depicting a long history of black people through abstractions and in broad chronological strokes—we have these real-life moments during which individuals assumed the dramatic roles of Abyssinian princes, princesses, or dukes with a specific political goal in mind, whether or not that goal was publicly articulated: to show that Ethiopia was not just a spiritual center but also a geopolitical center for the black world to which people of African descent needed to pledge allegiance. In other words, their acts argued that Ethiopia itself was a transnational black empire, an empire to which African America belonged. Obviously, this was controversial, and few organizations went as far in their identification with Ethiopia as the Star Order of Ethiopia, which advocated a Back-to-Africa movement with Abyssinia as its destination.

But why does your book turn to Ethiopia, as opposed to, say, Liberia or Haiti, as the “black land” of the book’s title? And why is Ethiopia so closely associated with royalty to many people?

It wasn’t until the twentieth century that Abyssinia officially became known internationally as “Ethiopia,” although the basis of the claim connecting the East African country to the ancient, biblical land is much older. It depends upon the mythic union of King Solomon and the Queen of Sheba, resulting in the birth of their son Menelik and marking the start of the Solomonic dynasty of the Ethiopian Empire. This mythic history, reaching back thousands of years, bestowed an aura of rootedness and solidity upon the ruling Ethiopian royal family. The members of the Star Order of Ethiopia, for instance, weren’t just pledging allegiance to a flag, they were pledging allegiance to an ancient crown and lineage. The Ethiopian Empire ended with the 1974 revolution, but there was, and still is, an obvious interest in the grandeur and longevity of Ethiopian imperial culture—especially through the figures of Emperors Tewodros, Menelik, and Selassie—that I discuss in the book.

Why does the book focus on the late nineteenth and early twentieth centuries? As the example of Phillis Wheatley demonstrates, Ethiopia was a significant figure in African American letters even earlier.

NH: During Wheatley’s lifetime, Ethiopia was usually imagined abstractly or vaguely, as a nation of black diasporic origination. In other words, it was a fantastic geographical site that the black world could treat as an originary point—the homeland from which transatlantic slavery uprooted and dispersed people of African descent throughout the world. Wheatley’s education would have exposed her to references to Ethiopia in the Bible and in classical and contemporary literature, and so she was recasting her memories of home through the lens of her literary education. Ethiopia was essentially a myth or metaphor for her and others of the period. My book argues that we can locate, in literary representations of Ethiopia, the general moment when the idea of Ethiopia evolves from a fantasy to a reality, when treatments of the nation become more concrete and historically informed, and that that reality has as much utility for the black world, particularly in the United States, as the fantasy had. I begin with 1867 because I found that the Anglo-Abyssinian War of 1867-68 was covered liberally not only in the British media but also in the American media—something that surprised me, given Abyssinia’s presumed remoteness.

Throughout the book, you examine caricatures and popular songs alongside novels and poems. How did you decide on the eclectic assortment of objects studied in the book?

NH: My research began with literature by African American authors about Ethiopia, but, as I investigated more deeply, I kept finding that the shadow of Ethiopia, to loosely paraphrase Du Bois, fell even more heavily upon the popular culture and ephemera of the period. I knew that I had to find a way to think through, for example, the tap dance performances of Sam, Ted, and Ray as Haile Selassie and his soldiers, and the photograph of Haile Selassie greeting Marlon Brando, as I do in chapter five. My aim throughout was to create as rich a contextual backdrop as I could in order to understand how imperial Ethiopianism circulated during this period.

Nadia Nurhussein is associate professor of English and Africana studies at Johns Hopkins University. She is the author of Rhetorics of Literacy: The Cultivation of American Dialect Poetry.