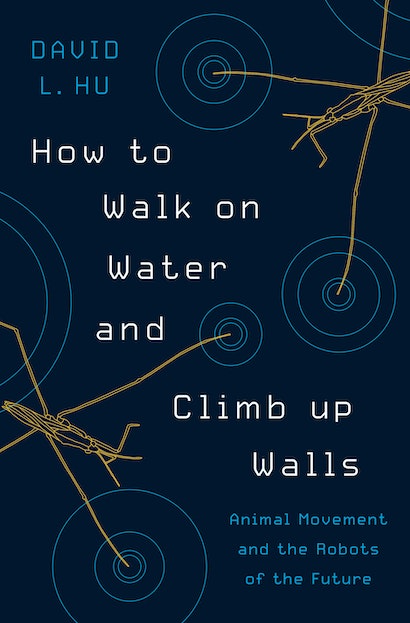 Insects walk on water, snakes slither, and fish swim. Animals move with astounding grace, speed, and versatility: how do they do it, and what can we learn from them? In How to Walk on Water and Climb up Walls, David Hu takes readers on an accessible, wondrous journey into the world of animal motion. From basement labs at MIT to the rain forests of Panama, Hu shows how animals have adapted and evolved to traverse their environments, taking advantage of physical laws with results that are startling and ingenious. In turn, the latest discoveries about animal mechanics are inspiring scientists to invent robots and devices that move with similar elegance and efficiency. In the first part of our Q+A with David Hu, he describes what helps this book stand out, and why any reader would be interested in learning more about the secrets of animal movement.

Why this book now?

DH: The last twenty years have seen an explosion in the number and types of investigators studying animal motion, in large part due to the greater number of tools that can visualize the motion of animals. High speed videography has gone digital. CT-scanners originally for use in hospitals can now see the shapes and insides of animals with better clarity than ever before. These shapes can now be printed using 3-D printing and then subjected to physically tests, for example to show that a shark’s scales can increase its fuel economy.

What is unexpected about this book?

DH: Many concepts from animal motion have no analogy in the built world. For example, most of the things we ride around on are hard, like the stiff frame of a car or bicycle. However, a great number of animals, especially insects, have evolved crushable bodies that enable them to survive impacts with their surroundings. Bees for example are so rushed to obtain pollen that they collide with hundreds of thousands of plant stems and flowers in a lifetime. Their wings have origami-based crush zones. Their hinges are made of a material called resilin, that is more springy than the springiest human-made material, Zectron, the main component in the 25-cent super ball.

What makes you qualified to write this book?

DH: My laboratory has featured in award-winning documentaries by Discovery Channel, and I have been an invited guest on Good Morning America, National Public Radio, and on television and radio broadcast across the world. I love talking about animal motion to the general public, and now it’s my chance to tell the story of my field.

What is your favorite part of writing this book?

DH: What I enjoyed the most about this book was getting to know the scientists whodid the work. The science that they discovered are easily found in their academic papers or in the news. But few people know abouttheir journey on the way to the facts. Often the scientists did not know exactly where they were going. Sometimes, their experiments were not working and they just got plain stuck, and their only option was to quite or follow a hunch. The scientists were often challenged by working with animals, which have a mind of their own. In my book, a scientist who wants to test flying snakes must climb to the top of a tall tower with snakes in burlap sack. He tries to avoid thinking of his fear of heights and snake bites as he climbs the tower. Dealing with situations like this is both hilarious and at times ridiculous, yet these are the things scientists must do to answer their burning questions. By following the thought process and the various things these scientists have had to subject themselves to, I hope to have brought in the feeling of talking to sworld-class scientist as if they are sitting across from you at a bar. My goal is for you to see theirthought process and say, I would have probably done the same thing in their shoes.

Why should I read this book?

DH: If you have ever enjoyed watching animals on Discovery channel, this book will provide a conversational explanation of the things that you see in the show. With the more leisurely format of the book, I have adequate space to explain the physical principles at work. I bet you’ll find the discussion satisfying, and you’ll want to tell others about what you’ve learned.

Is the material suitable for young readers?

DH: There are usually plenty of kids at my talks, and a number of their parents have bought the book. The book doesn’t assume any prior knowledge, and uses everyday language.  It also has 40 black and white and 20 color pictures to illustrate the points. Many of the topics in the book have videos of the associated material online. So the answer is yes, I think young readers will enjoy the book.