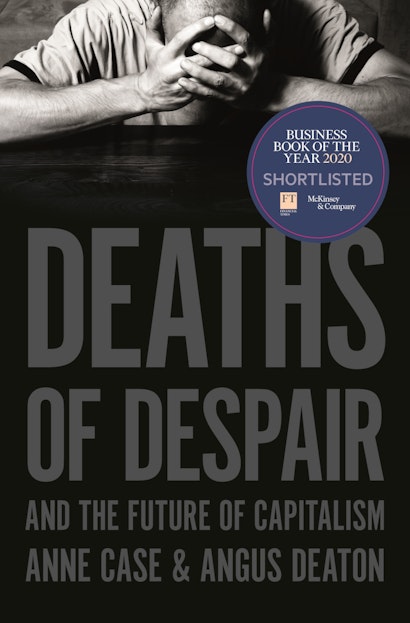 When Angus Deaton and I began to document the dramatic increases in mortality from drug overdose, alcoholic liver disease and suicide—the deaths of despair that we describe in our new book—we found many things that surprised us. The epidemic was centered on white non-Hispanics; it was occurring nationwide; and it fell almost exclusively on prime-aged adults without a four-year college degree. But what perhaps surprised us most was that these deaths were rising in parallel for men and women. Men are more likely to die from these causes, but the increases for women have kept pace, year after year for the last quarter century. While many press reports on our work wrote accurately about the rise in mortality for both men and women, the articles often carried headlines about “white men dying.” It is possible that the headline writers couldn’t imagine women killing themselves in any of these ways and indeed, in the early 1990s, it was rare. But that has changed.

While many press reports on our work wrote accurately about the rise in mortality for both men and women, the articles often carried headlines about “white men dying.” It is possible that the headline writers couldn’t imagine women killing themselves in any of these ways and indeed, in the early 1990s, it was rare. But that has changed.

For American women in middle age, the mortality rate from all causes has shown no progress since the late 1990s, which contrasts markedly with the two-percent-per-year decline in the risk of dying for women in other wealthy countries. In the US over this period, all-cause mortality rates have risen by fifteen percent for white non-Hispanic women, and by thirty-five percent for white women without a four-year college degree.

Using the past as a guide, we had every reason to expect midlife mortality rates would continue to fall in the new century, much as they had in the last, and much as they are in the rest of the rich world. What is happening?  In the second-half of the 20th century, the two largest killers for women in midlife were heart disease and cancer. For many years, it was not acceptable for women to smoke—discrimination that may have saved many lives. Women started smoking later than men, and continued smoking well after men’s rates began to fall, and as a result women’s midlife mortality from lung cancer rose through the late-1980s before beginning a decline that continues to this day. More generally, women’s progress against cancer remains strong.

In sharp contrast, women’s progress against heart disease, which was an important engine to longer life, has stalled. The reasons for this are not yet well understood. Obesity rates continue to climb, and while medications to fight hypertension and diabetes have been very successful, it is possible that there are limits to their ability to stave off heart disease mortality. Or, perhaps, women’s use of these life-saving medications has fallen. It is also possible that alcohol and drugs have compromised cardiovascular health. Alcohol in excess weakens the heart muscle and can make the heart beat irregularly. Drug use also puts the heart at risk.

In 1992, white women ages forty-five to fifty-four without a bachelor’s degree were three times more likely to die of heart disease than from a death of despair. Now they are thirty percent more likely to die from drugs, alcohol or suicide.

It is hard to exaggerate the role that deaths of despair have played in increasing women’s mortality rates. In 1992, white women ages forty-five to fifty-four without a bachelor’s degree were three times more likely to die of heart disease than from a death of despair. Now they are thirty percent more likely to die from drugs, alcohol or suicide. Beneath these deaths we document increases in pain, in mental distress and social isolation for those without a four-year college degree.

The underlying causes of this despair are explored in the second half of our book. We argue that capitalism and democracy are no longer working for Americans without a BA. Job prospects for women and men with less education have eroded, in part due to globalization and automation, and in part due to a rapacious healthcare industry that each year takes a larger fraction of GDP and redistributes it upward to hospitals, pharma companies, device manufacturers and doctors at the top of the income distribution. Jobs that were once a part of large company are now contracted out, to remove the need to provide health insurance, which currently costs firms an average of $20,000 per family. Jobs lost are being replaced by work with few or no benefits, and with no chance of moving up in a company. With the labor market decline has come a marked decline in marriage rates among those without a college degree, although rates of cohabitation and parenting outside of marriage continue to rise. The pillars that held life together and helped to give life meaning – a job with prospects, a stable family life, a voice in the community – have all faltered. We argue that this is the Durkheimian recipe for suicide and self-medication through drugs and alcohol. Women have not been spared this tribulation.

Anne Case is the Alexander Stewart 1886 Professor of Economics and Public Affairs Emeritus at Princeton University. She is author with Angus Deaton of Deaths of Despair and the Future of Capitalism.