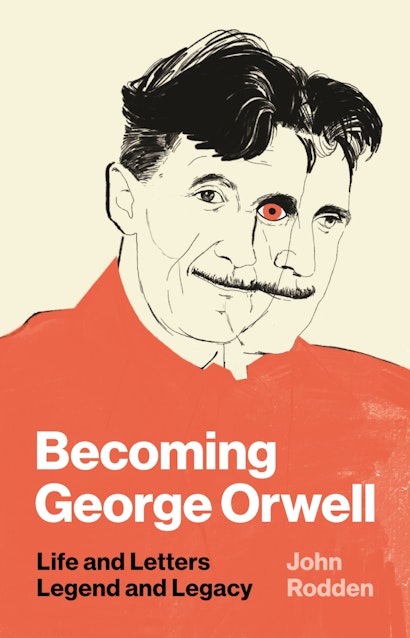 Is George Orwell the most influential writer who ever lived? Yes, according to John Rodden’s provocative book about the transformation of a man into a myth. Rodden does not argue that Orwell was the most distinguished man of letters of the last century, nor even the leading novelist of his generation, let alone the greatest imaginative writer of English prose fiction. Yet his influence since his death at midcentury is incomparable. John Rodden presents the author of Animal Farm and Nineteen Eighty-Four in a new light, exploring how the man and writer Orwell, born Eric Arthur Blair, came to be overshadowed by the spectral figure associated with nightmare visions of our possible futures. Rodden opens with a discussion of the life and letters, chronicling Orwell’s eccentricities and emotional struggles, followed by an assessment of his chief literary achievements.

It was a bright cold day in January, and the keyboards were clicking $$$$$$$$$$$$$.1 In a deliciously fitting historical irony, the first full day in office of the new American president, Donald Trump, commenced on January 21, 2017—­the sixty-­seventh anniversary of George Orwell’s death—­just as Orwell’s grim novel of a dystopian future, Nineteen Eighty-­Four, began its ascent once again to No. 1 on the best seller lists.

Such is Clio’s caprice.

In hindsight, the Orwellian countdown to Inauguration Day started even before Election Day on November 8. Trump’s startling victory triggered an unexpected explosion of popular interest in the novel, however, as sales of the Signet paperback edition jumped tenfold in the next six weeks. On the eve of the inauguration, the book hovered between No. 5 and No. 7 on the Amazon.com best seller list. Following the inauguration, a series of controversial public statements by senior officials in the new administration catapulted it to No. 2. And by the morning of January 25, it stood at No. 1. 2

Opening on June 22 as the first major entry of the 2017–­18 Broadway season, a British production of 1984 was staged at the newly refurbished Hudson Theater. Jointly arranged by London producer Sonia Friedman and New York producer Scott Rudin, this stage version had been mounted in London in 2013–­14 and has most recently starred Andrew Gower as Winston Smith.

Co-­created by writer-­directors Robert Icke and Duncan Macmillan, 1984 had toured to sold-­out houses—­and rave reviews—­throughout England. The production had featured a giant video wall from which Big Brother looked down on his party members to make sure no one was committing “thoughtcrimes.” Critics hailed the lighting, sound, and video design as a provocative assault on the mind and senses—­like a trip to Room 101—­and compared the production to movies by Stanley Kubrick and David Lynch. The London production was performed for a few regional American audiences in 2016, most notably at the American Repertory Theater in Cambridge, Massachusetts, and at the Shakespeare Theatre in Washington D.C. The Broadway show featured an all-­American cast.

The Broadway staging of 1984 succeeded months-­long efforts to satirize and protest the policies of Trump and his adminis­tration. For example, on April 4—­the date on which the fateful events that open Orwell’s novel occur—­a Hollywood-­based political advocacy group (dubbing itself the United States of Cinema) arranged the return screening of Michael Radford’s film adaptation in American theaters. Originally released in 1984 and starring John Hurt as Winston and Richard Burton as O’Brien—­in Sir Richard’s last film appearance before his death—­160 art house movie theaters across the country in 148 cities and 42 states (plus five locations in Canada and one in England) screened 1984 as part of a larger political campaign against the decision by the Trump administration to cut funding from artist grant programs, including the National Endowment for the Arts, the National Endowment for the Humanities, and the Corporation for Public Broadcasting.

The Oprah of the Oval Office, or Doubleplusgood Dystopianism?

How did all this come to be? Several related news events that exemplified what has come to be known as the “post-­factual world” account for the meteoric rise and final breakthrough of Nineteen Eighty-­Four to the top of the best seller lists in January 2017. Within hours of Trump’s swearing in, White House press secretary Sean Spicer heatedly insisted that the inauguration had been the best attended ever—­“period”—­regardless of what the photo and statistical evidence might indicate. Two days later, on the Sunday morning television show Meet the Press, Kellyanne Conway, a close advisor to the president, defended Spicer by “explaining” that his false claims were merely “alternative facts.” Alarms rang out across the globe that Winston Smith could not have come up with a better line in his cubicle at the Ministry of Truth, where all fabrications are merely what could be termed “alter­native facts.” Within minutes of the novel’s historic reconquest of first place on the best seller list—­as had already happened during September 1983 to April 1984, 34 years after its original publication in June 1949—­staffers from news organizations such as CNN and PBS were in touch with me for comments about “what Orwell would say.”

I dubbed Conway, whose inadvertent masterstroke of euphemistic Newspeak suddenly made her the darling of the publishing industry, the “Oprah of the Oval Office,” a wonder woman who could immediately turn serious books (above all, dystopian classics) into best sellers, even if they had been selling poorly (or had been out of print) for years. Her notorious phrase immediately went viral and was translated into numerous languages.3 Not that the Fourth Estate abuses language any less than does the administration—­or is any more unlikely to be ignorant of the English language. After my own interview with PBS, I read the following sentence in its published report on the Amazon best seller story: “Born in 1903, Orwell lived through two world wars and saw the rise of totalitarian regimes on an unpresidented [sic!!] scale.” (Unfortunately—­yet predictably—­this was not deliberate irony, as I later ascertained.)

Signet regarded the entire development as “doubleplusgood.” Its edition of the novel soared even higher in the two months following the inauguration, enjoying a 10,000 percent increase in sales, whereupon the publisher immediately announced a new print run of 100,000 copies, including an additional 25,000 of Animal Farm. In Britain, sales of the Penguin edition of Nineteen Eighty-­Four, which had been selling approximately 5,000 copies per week in the run-­up to January 20, multiplied following the January news events, inducing Penguin to print 75,000 more copies immediately. Random House also printed an extra 175,000 copies of the novel based on sales forecasts.

Obviously, the sales of Nineteen Eighty-­Four have risen in ­response to Trump’s audacious attempts to manipulate facts throughout his long presidential campaign and since his November 2016 election victory. His tall tales grew, if anything, even more Bun­yanesque during his first week in office. For instance, besides outlandish claims of mass voter fraud and his contention that he had lost the popular vote in the November election because 3 million votes had been cast “illegally,” Trump maintained that the science behind climate change is a hoax perpetrated by the Chinese.

In his personal manifesto, The Art of the Deal (1987)—­which some critics regard as a self-­revealing statement of his life philosophy à la Hitler’s Mein Kampf—­Trump discusses his style of “bravado” and penchant for “truthful hyperbole,” which he considers “an innocent form of exaggeration—­and a very effective form of promotion.” Unsurprisingly, among the other postelection best sellers on Amazon.com was Trump’s The Art of the Deal. By late January, it had consistently secured a place in the top 15.

2 One could argue, as I pointed out in interviews, that the groundswell of demand for Nineteen Eighty-­Four and other dystopias began months before the week of January 20. Various political leaders and celebrities had already associated Trump with “Big Brother” in the months leading up to Inauguration Day, pushing Nineteen Eighty-­Four into the top slot in the political fiction category on the Amazon list. The skyrocketing sales of the novel also had lifted Animal Farm into the top 10 on the same list.

In fact, the Trump administration inadvertently boosted sales of numerous books within the anti-­utopian genre. For instance, Aldous Huxley’s Brave New World also cracked Amazon’s top 10 best seller list in late January 2017 and continued to hold its place throughout the spring. Far more surprising, in November 2016 Sinclair Lewis’s anti-­utopian It Can’t Happen Here (1935) jumped to No. 1 on Amazon’s best seller list. Long out of print in the United Kingdom, Penguin did not bother to print a new edition of the novel until the week of the inauguration, during which it quickly sold 11,000 copies. The largely forgotten satire features a charismatic, demagogic jingoist, who pledges to restore American greatness—­very much in the spirit of Mussolini’s Rome and Hitler’s Germania—­and proceeds to lead the nation into fascism. “My one ambition,” claims the new president, “is to get all Americans to realize that they are, and must continue to be, the greatest race on the face of this old Earth.”

Another brisk seller in 2017 was Margaret Atwood’s The Handmaid’s Tale, originally published in 1985. It too briefly occupied Amazon’s top spot for fiction in spring 2017, thanks above all to Hulu’s TV series adaptation of the work, which premiered on April 26 and starred Elizabeth Moss (with a cameo appearance by Atwood herself). The novel tells the story of a woman in New England after an oppressive religious regime takes over power.

Meanwhile, publishers of classics in political science, science fiction, and socially aware realist fiction were twittering with glee as Hannah Arendt’s The Origins of Totalitarianism, Ray Bradbury’s Fahrenheit 451, and John Steinbeck’s Of Mice and Men also enjoyed revivals of interest.

But Nineteen Eighty-­Four remained the biggest international best seller of the dystopian genre. It was the only classic among Spain’s 50 best-selling books of 2016 and topped some European fiction lists in 2017.

This essay is an excerpt from the Prologue of Becoming George Orwell by John Rodden. Continue reading here.