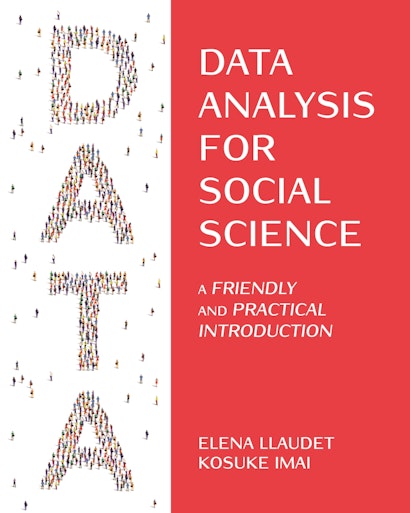 Data Analysis for Social Science
Available in 3 editions
Buy This

Data Analysis for Social Science: A Friendly and Practical Introduction teaches step-by-step how to analyze data with the free and popular statistical program R and covers the fundamentals of survey research, predictive models, and causal inference.

How is this textbook different from most existing textbooks on quantitative methods for social sciences?

As the subtitle suggests, our goal was to make Data Analysis for Social Science
—DSS for short—as friendly and practical as possible.

To make DSS friendly, we wrote it using non-technical language and assuming no prior knowledge of coding or statistics and only minimal knowledge of math. In addition, we intentionally designed the book to accommodate different audiences. For example, in the margins we included TIPs with supplemental material, such as detailed explanations, answers to common questions, and notes on best practices. We also placed any relatively math-heavy material in sections labeled FORMULA IN DETAIL, which readers can choose to read or skip.

To make DSS practical, we provide a step-by-step guide to analyzing with R real-world data from published research. Throughout the book, we replicate the findings from existing studies and answer a wide range of questions, including What is the effect of small classes on student performance? Who supported Brexit? How can we predict GDP growth using night-time light emissions measured from space? and What was the effect of Russian TV propaganda on the 2014 Ukrainian elections?

At the end of each chapter, we added CHEATSHEETS to help readers review the core concepts as well as the R functions, symbols, and operators covered. And, throughout the book, in the margins are RECALLs, which remind readers of relevant information mentioned earlier. These reminders are particularly helpful when the book is read only a few pages at a time, such as over the course of a semester.

Who is DSS meant for?

DSS is meant for complete beginners, regardless of whether they are in high school, in a graduate program, or out of school altogether.

First, we wrote DSS so that anyone could learn these skills by following along with the exercises in the book on their own computer, without the help of an instructor. (The real-world datasets analyzed and the code used to analyze them are available on the book’s website. In chapter 1, we start from the very beginning by showing how to get our computers ready, installing and familiarizing ourselves with R and RStudio—the two software programs used—and teaching how to load and make sense of data.)

Second, we also specifically designed DSS to accommodate different audiences, thus making it suitable for courses at different levels of schooling. Indeed, DSS has already been used to teach introductory methods at a wide range of levels, from high school to graduate programs and everything in between.

We wrote this book because we wanted to make data analysis for the social sciences accessible to everyone. Drawing conclusions from data and being able to evaluate the strengths and weaknesses of social scientific studies are critical skills that should be available to all. Not only can these skills lead to a job as a data scientist, but they also help us understand and address important issues facing society.

With DSS, we aim to lower the barriers to becoming a data scientist and to share more broadly the excitement of quantitative social science research. Among other things, we hope this book will motivate institutions that do not currently teach quantitative methods to start offering a course on them. To make it easier for instructors teaching this material for the first time, we make course materials available, including sample syllabus, lecture slides, additional exercises with solutions, and additional real-world datasets.

How did the two of you meet?

We had never met when we started working on the book. I (Elena) had used Kosuke’s Quantitative Social Science: An Introduction (Princeton University Press, 2017; aka QSS) to teach my undergraduate course at Suffolk University, and while I loved QSS, my students really struggled with it. In March 2017, I emailed Kosuke out of the blue and proposed that we write a more basic and accessible textbook with the express intent to reach students with no prior experience with statistics or coding, and with only minimal knowledge of math. After a few conversations, Kosuke agreed to collaborate on the project, and we took it from there.

What are the similarities and differences between DSS and QSS?

Both DSS and (the original) QSS progress by analyzing with R real-world data from published social science research. DSS is currently available only in base R, while QSS is already available in base R, tidyverse, and STATA.

Elena Llaudet is Assistant Professor of Political Science at Suffolk University in Boston. Kosuke Imai is Professor of Government and of Statistics at Harvard University.