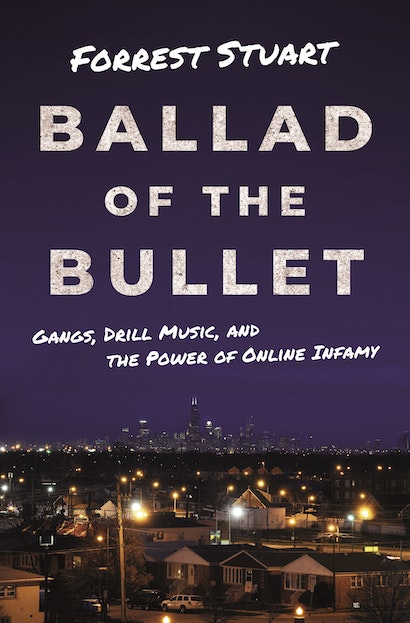 With the holidays upon us and the end of the semester approaching, it’s a busy time of year. But this month’s Office Hours is worth the read. Forrest Stuart, author of Ballad of the Bullet: Gangs, Drill Music, and the Power of Online Infamy, shares some significant moments thus far in his career, offers valuable insight on some of his favorite books—and may surprise you with his bedtime reading habits.

FS: For the last decade or so, I’ve developed the habit of keeping two books on my bedside table at any given time, reading a bit of both each night as I wind down. The first is typically a newly published ethnography, which helps me stay current in my field. Right now, it’s Policing the Racial Divide: Urban Growth Politics and the Remaking of Segregation, by Daanika Gordon. The book takes us throughout daily life in Rust Belt city via police ride-alongs, community meetings, and other public events. Gordon weaves a fresh analysis of how police departments do more than merely respond to the racialized issues emanating from histories of segregation; rather, they are key, active authors in creating and reproducing the urban color line. As urban sociologists, geographers, and political economists continue to take policing more seriously, this book feels like the first of a new era of much-needed scholarship.

The second book in my bedside rotation is always a fantasy novel. My obsession with the genre is something I’ve kept very quiet around colleagues, until now, I suppose. I’m currently wrapping up the fifth and final book of Brent Weeks’s Lightbringer series. It follows a young orphan challenging an empire ruled by religious authoritarianism, palace intrigue, and, yes, a healthy dose of magic. Weeks’ series is deeply ethnographic, with complex worldbuilding that stretches between the multiple thousand-page books. I’m especially fond of the detailed maps on the first few pages, which let me follow the protagonist’s journey across mountain ranges and oceans. In my first book, Down, Out, and Under Arrest, which documents policing’s ripple effects across everyday life in LA’s Skid Row, I designed and included a map of the neighborhood as a kind of homage to my favorite fantasy writers. I also find myself dog-earing pages of fantasy novels when I spot literary tricks and grammatical moves I hope to try out in my own prose.

FS: Without a doubt, the book that has had the biggest impact on my career is Mitchell Duneier’s masterful 1999 book, Sidewalk. It’s an ethnography of Black, precariously housed magazine vendors who set up shop on Sixth Avenue in New York’s Greenwich Village. Through Duneier’s fieldwork, we see how the vendors become “eyes on the street” to enhance safety for vulnerable populations, provide mentorship to young Black men in the local service economy, and act as key “nodes” that link residents across racial, class, and generational lines. Throughout his analysis, Duneier “zooms out,” tracing how structural forces, like deindustrialization and zero-tolerance policing, have aligned to bring the vendors to this location and hound their continued existence. He also “zooms in” to the interactional level using conversation analysis (CA), measuring split second pauses and turn-taking to show how vendors’ seemingly innocuous chatter with passersby constitutes a form of “interactional vandalism” that intimidates women and reinforcing stereotypes about Black men. Stylistically, Sidewalk often reads more like a novel, with flowing dialogue punctuated with beautiful black and white photos from the Chicago Tribune’s Ovie Carter.

A few years after its release, Sidewalk was also the subject of arguably the most famous book review symposium in sociology, generating a heated back-and-forth between Duneier and Berkeley’s Loïc Wacquant on the issues of transparency, representation, and the role of urban ethnography in the fetishization of poverty. I return to the debate every time I start a new project.

ML: What is your favorite book to teach?

FS: In just about every class I teach, I look for new ways to put Mary Pattillo’s now-classic Black Picket Fences: Privilege and Peril among the Black Middle Class on the syllabus. I start by showing students how Pattillo uses the opening “setting” section—often a perfunctory, forgettable part of a book—to set up a wonderful empirical puzzle. Walking the reader through a tour of the “Groveland” neighborhood on Chicago’s South Side, Pattillo paints a scene where, because of intergenerational segregation, middle class Black residents, banks, and churches share walls and sidewalks with low-income Black residents, subsidized housing, and check cashing outlets. How, Pattillo leads us to ask, does this unique cross-class proximity structure everyday life and social organization for the Black middle class? In answering, Pattillo deploys several analytical strategies that I pass on to my students. She shows the underestimated power of creating typologies, finding variation among Groveland residents (for example, whether they internalize or merely perform “street culture”), and then showing how variation along these lines leads to differing outcomes. She also leverages the power of “deviant” cases to show how certain people blur the boundaries of ideal types, forcing us to rethink and refine many of our taken-for-granted theoretical categories. The book is simultaneously a lesson on how to write about participants and their communities, especially those who occupy marginalized social positions. Pattillo’s empathy and respect shine through on every page, from the pseudonyms she chooses to the biographical details she shares (and doesn’t share) with the reader.

FS: I’m proud of the fact that I’ve had quite a few occasions where an experience radically reshaped my prior assumptions and the direction of the entire project, usually for the better. One that I won’t ever forget came in the early stages of my research for my second book, Ballad of the Bullet. The book follows a group of young Black men on Chicago’s South Side as they strive for popularity—and an income—in the digital economy. They spent their days recording and uploading a homemade genre of gangsta rap, sometimes referred to as “drill music” to YouTube. Then, they turn to their multiple social media platforms to try to authenticate the hardened criminal personas they crafted in their songs. A music video about committing a drive-by shooting might be accompanied on Twitter with talk of potential victims and Instagram photos holding a gun out of a car window. When done well, it’s easy to start believing that young men in the drill scene might actually do the deeds they rap about. That’s their intention, after all—to lure in voyeuristic, middle-class audiences looking for a glimpse into ghetto life.

I’m embarrassed to admit that I had bought into quite a few of their performances of “badness.” Of course, I knew that they weren’t nearly as violent as they wanted their typical audiences to believe. But when I really got to know them, I learned that the vast majority of their posts weren’t just exaggerations, they were utter fabrications. Some of the men known as the most violent had never actually fired a gun, and even avoided conflict. Focusing instead on these young men’s inauthenticity, and their strategies of performance, let me highlight their savvy creativity amid some incredible structural obstacles.

FS: When I was in grad school at UCLA, Elijah Anderson gave a talk in our department. At one point in the question-and-answer portion he made an off-the-cuff comment that the best sociology is sometimes just documenting how “regular” people—as in, non-sociologists—do sociology in their day to day lives. Whether at work, at home, at church, or on a date, people run into recurring dilemmas and vexing situations. Just like us “licensed” sociologists, they try to figure these things out, collecting data, forming hypotheses, testing hunches, assessing their findings, and implementing the lessons learned. It’s our job, then, to figure out how different people walk though these common phases. This idea really stuck with me and colors how I approach research, writing, and teaching. Maybe the thing I love most is that it encourages us to move from deficit-based approaches to asset-based ones that rethink even the most marginalized groups as creative problem solvers.

ML: If you could have dinner with two sociologists, living or passed, who would they be and why?

FS: Karl Marx and Erving Goffman. These are the two sociologists that have influenced me the most intellectually and personally. These are, in my opinion, the two most brilliant thinkers in history. But I’ve always felt a tension between the core premises of their work, especially around what explains social life and outcomes. For Marx, the key explanations rest at the macro level of political economy, in the structural relationships between classes. Marx seems hardly concerned with what goes on during micro-level interactions between people. For Goffman, it’s mostly the opposite, privileging interactions and bounded situations while paying much less attention to macro level forces. And yet, when we look out at the world, there’s plenty of evidence that both are “right.” I’d love to pour the two of them a few stiff cocktails and see if we can find the common threads running through their thinking.