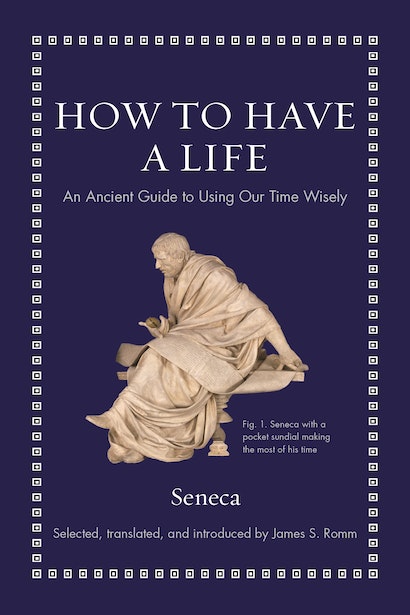 How to Have a Life
Available in 2 editions
Buy This

According to a myth referred to by Aeschylus in his play Prometheus Bound, at the beginning of time human beings had foreknowledge of when they would die. Among the gifts that Prometheus gave to humankind, along with fire and all the technologies that spring from it, was obliviousness to that knowledge. Knowing one’s expiration date, in the god’s view, prevented one from undertaking anything meaningful. That terminus was always lurking and shadowing one’s every move.  Anticipation of the end would induce a kind of paralysis.

The absence of such knowledge however leads to a failing of a different kind, as Seneca observes in his essay On the Shortness of Life. Because we can’t truly conceive of an endpoint to life, we give to our time far less value than we should, squandering it on useless pursuits or frivolities. We behave like the author or journalist who hasn’t been given a deadline and who puts off starting a writing task year after year (I speak from experience here). If our editor suddenly calls for the piece, or if death suddenly looms (not to compare book editors with the grim reaper), we are struck with remorse for the time that has passed us by. If we’d realized early on that our lifespans are short, in calendar terms, we might have lengthened them considerably, by using every moment to the fullest and giving to time the value it deserves.

Readers of Seneca, a Roman Stoic philosopher who also served as chief minister to emperor Nero, will not be surprised that the nearness of death plays such a large role in this essay’s treatment of time. For Seneca, death was the great, overriding truth about life, a subject explored in many passages of his ethical treatises (the crucial ones are collected in my first contribution to Princeton’s Ancient Wisdom for Modern Readers series, How to Die). All of life, as Seneca saw it, is really a journey toward death; we say of terminal patients “they’re dying,” but really that sentence applies just as well to newborn babies or youths in their prime. Cottidie morimur, Seneca wrote on two different occasions: “We are dying every day.” And that perspective led him toward a deeper, more urgent understanding of time than most of us can lay claim to.

If we really glimpsed the value of time, would we ever turn on our televisions or log onto the internet?  (I write this as one who enjoys the daily entertainment of pet videos as much as the next person, or perhaps more.). Won’t we feel, as we come to old age, that we’ve given too much of our life to these things, sensing that if we could see a tally of all the hours so spent, we’d be utterly horrified?  In On the Shortness of Life Seneca imagines an experiment much like this: an accounting by centenarians of all the time they’d given to money-making pursuits, to social obligations, and to useless distractions.  Addressing this hypothetical group of extreme elderly, Seneca warns: “You’ll understand that in fact you’re dying too soon.”

Time is in fact not a fixed commodity in Seneca’s eyes, but a thing that expands or contracts in accordance with how well it’s used. Were we to fully live every moment, and not squander any, we’d gain more time, even attaining a kind of immortality at the utmost extreme. The way to reach that extreme is perhaps not one that most of us would have guessed, but one that makes sense in the context of ancient Stoic thought:  by reading philosophy, the richest and most engaged way of being alive. Socrates had famously declared that the unexamined life was not worth living; Seneca transmutes that idea and proclaims that the constantly examined life, the life of philosophers, is the only one worth living. “Only those who make time for wisdom …are truly alive,” he says as he begins the peroration of his work (chapter 14).

Just as surprising, to modern readers, as Seneca’s opinion of the best use of time are some of his examples of the worst. We might regard evenings spent dining with friends as valuable and healthy, but Seneca lampoons people who devote attention and care to dinner parties, among a long list he compiles of ignorant wasters of time. Indeed throughout the essay On the Shortness of Life he regards social obligations as so many wastes of time, a reflection of the fact that for his circle—the political elite of Rome—such bonds were inevitably tied up with the need to seek favors from those higher up the ladder or give aid to those lower down. His career under Nero made him hyper-aware of the transactional nature of all such interactions, a subject he explored in great depth in his longest essay, On Benefits (a work I excerpted and translated for the Princeton volume How to Give). True friends, in Seneca’s view, would not lay purloin any bits of our time any more than they’d steal our money. In practice this means they’d largely leave us alone.

The analogy between time and money runs all through the essay On the Shortness of Life and also governs the first of Seneca’s Moral Epistles, the overture as it were to that immense magnum opus.  Time, in Seneca’s view, is similar to money in that we can make it go farther if we use it wisely, but, he observes, we’re far more conscious of how we spend wealth than of how we spend time, an inversion of the proper relationship. Once again it’s the concept of awareness of limits that accounts for this imbalance. We generally know how much money we have, so if we’re fiscally responsible we conserve it to make it last the entire span that it’s needed. Through not knowing how much time we have, we become prodigal of the more precious resource.

Thus arises Seneca’s emphasis on death, the endpoint of our time as physical beings. Prometheus may have removed our destructive fixation on the date of our death but in doing so opened us up to the illusion of unending time. Seneca saw it as our task to dispel this illusion and count every moment as precious as though it were our last.

James S. Romm is an author, a book reviewer, and the James H. Ottaway Jr. Professor of Classics at Bard College. He is the editor and translator of Seneca’s How to Give, How to Keep Your Cool, and How to Die (all Princeton), and the author of Dying Every Day: Seneca at the Court of Nero. His reviews and essays have appeared in the Wall Street Journal, the London Review of Books, the Daily Beast, and other publications. He lives in Barrytown, New York.