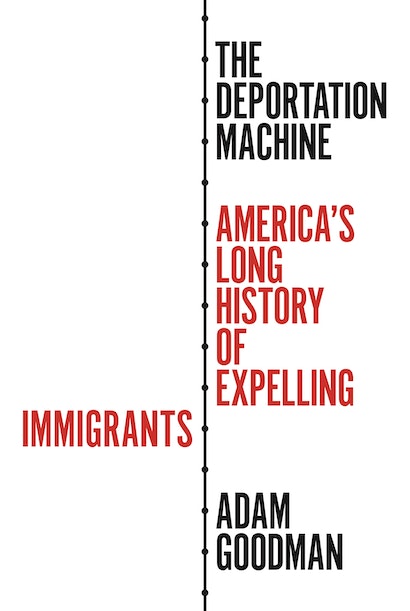 The Deportation Machine
Available in 3 editions
Buy This

Javier García Bautista had not been at his station for long on May 17 when someone in the carpentry department of the suburban-Los Angeles shoe factory where he worked yelled out, “The migra is here!”

Forty immigration officers surrounded the facility around 8:00 a.m. and blocked off all the exits: the front door leading out to the employee parking lot, the north-facing windows, and the loading dock near the gate around back.

With the building secured, the agents entered the factory and fanned out. Hoping to avoid detection, the 22-year-old García Bautista tucked himself out of sight. As he hid, the agents circulated throughout the massive plant, indiscriminately questioning the workers and asking them if they had papers. They arrested men and women, taking down their information, handcuffing some and shoving others.

A little after 10:00 a.m., as the operation wound down, plainclothes investigator Rollie Clark shined his flashlight into a large container. “I see a body here,” he called out, at which point he and another agent pulled García Bautista from his hiding place and led him out to the already packed immigration vans.

Authorities returned to downtown Los Angeles that morning with 119 people in custody, nearly all of them Mexican. By late afternoon, no more than nine hours after the raid had started, half of the workers were aboard government buses headed to Tijuana.

But the buses never made it to the border.

What neither the immigration officials nor the shoe factory employees knew that day was that as agents loaded the detainees onto the buses, a coalition of immigrants, labor organizers, and lawyer-activists had convinced a federal judge to sign a temporary restraining order stopping the workers’ deportation. Nor could they have imagined that in the days, weeks, months, and years ahead, the case would provide a blueprint for how to bring the deportation machine to a grinding halt. Though these dramatic events may sound like they’re ripped from the news headlines of the past few years, they took place in 1978.

I recount this largely unknown story in The Deportation Machine: America’s Long History of Expelling Immigrants. My book traces the origins of the machine back to the late nineteenth century, exposing the bureaucratic, capitalist, and racist imperatives that have driven authorities to purge people from the country and to exert tremendous control over those who remain. The book also explores the history of how undocumented immigrants have endured, adapted, and resisted, taking to the streets and to the courts to demand their constitutional rights and challenge what they have considered to be unjust laws and inhumane treatment.

In some respects, the history I tell is one of continuity, rather than change over time. However, the mid-1970s marked a critical turning point: the dawn of the age of mass expulsion. Between 1975 and 2000, annual deportations from the United States exceeded 1.1 million, on average, and rarely dipped below 900,000 in any given year.

Immigrants and their allies mobilized in response, empowering the undocumented community through labor organizing and know-your-rights workshops. They also located weak points in the enforcement apparatus and applied pressure to them. Activists soon realized that immigration officials depended on a coercive administrative process, euphemistically known as “voluntary” departure, to keep the machine running. These fast-track deportations occurred after people signed, or were forced or tricked into signing, a form stating that they would waive their due process rights and agree to leave the country. Most scholars and the public have paid scant attention to voluntary departures, but, as I show in my book, they have been central to immigration enforcement policy throughout U.S. history. These informal expulsions made up 96% of all deportations from the United States during the second half of the twentieth century.

Recognizing authorities’ near-exclusive reliance on voluntary departure as a potential vulnerability, advocates developed an ingenious strategy for an era when people’s biometric information and border crossing histories were not yet accessible with a few simple keystrokes: Don’t say anything. Don’t sign anything. Demand to see a lawyer. Demand a deportation hearing.

Around sixty of the shoe factory employees apprehended that spring day in 1978 adopted this approach and refused voluntary departure. Before long, immigration judges had no option but to terminate most of the removal proceedings.  The workers’ bold actions posed a serious threat to the immigration bureaucracy. As a Wall Street Journal editorial later observed, officials’ “great nightmare” during this period was “that some part of a million aliens a year will suddenly stop agreeing to ‘accept voluntary departure.’” The service’s former general counsel went even further, warning that if enough people demanded hearings, they would “cause a breakdown … The administrative mechanism would collapse. It would never complete a case.”

Although apprehended immigrants never rejected voluntary departure en masse, we should recognize the importance of the fact that activists had figured out a way to slow down, or perhaps even stop, deportations. During the past twenty-five years, punitive laws, 9/11, and the election of Donald J. Trump have resulted in draconian changes to immigration enforcement. Undocumented immigrants and their allies have ramped up their efforts in response, from organizing mass marches and engaging in acts of civil disobedience, to filing lawsuits and pushing for legislative reform.

Today, as in the past, people continue to fight the machine by identifying the most effective ways to contest callous policies and by insisting that everyone is deserving of basic rights, respect, and dignity.