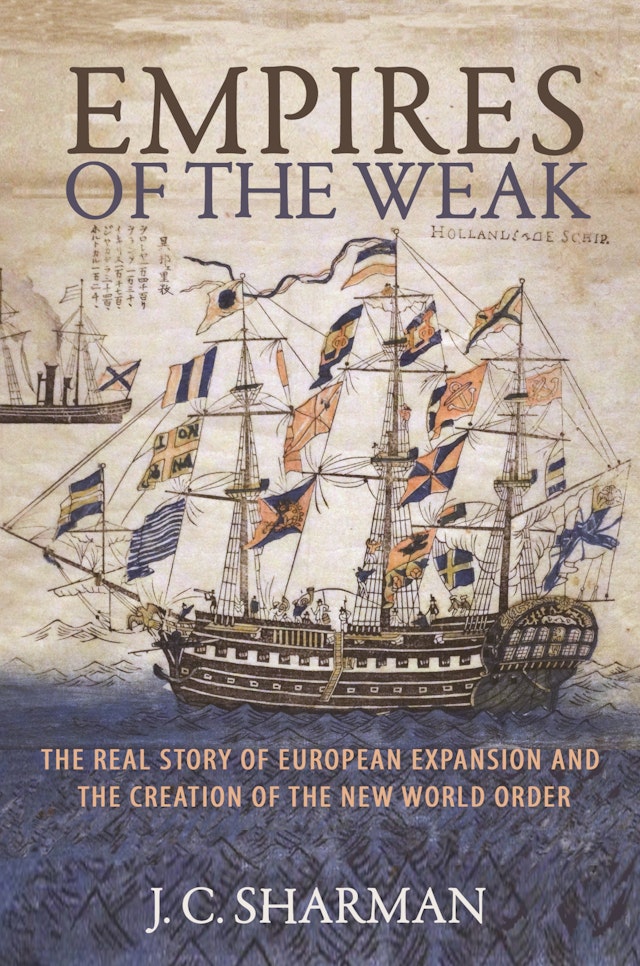 Empires of the Weak
Available in 3 editions
Buy This

What accounts for the rise of the state, the creation of the first global system, and the dominance of the West? The conventional answer asserts that superior technology, tactics, and institutions forged by Darwinian military competition gave Europeans a decisive advantage in war over other civilizations from 1500 onward. In contrast, Empires of the Weak argues that Europeans actually had no general military superiority in the early modern era. J. C. Sharman shows instead that European expansion from the late fifteenth to the late eighteenth centuries is better explained by deference to strong Asian and African polities, disease in the Americas, and maritime supremacy earned by default because local land-oriented polities were largely indifferent to war and trade at sea. Bringing a revisionist perspective to the idea that Europe ruled the world due to military dominance, this book demonstrates that the rise of the West was an exception in the prevailing world order.

Scholars have long argued that the dominance of the West can be attributed to superior technology, tactics, and institutions. Your book takes an opposing view. Can you describe it?

JCS: The standard view is to see Western expansion as synonymous with Western dominance, but my book separates the two. For around three centuries, Western expansion was more often the result of deference and subordination to non-Western rulers. Africans and Asians tolerated a weak European presence because Europeans were generally fixated on the control of the seas, which more powerful but terrestrially-oriented non-Western rulers generally didn’t care about. Even in the Americas, European victories were much more partial and incomplete than often portrayed, and were generally the result of disease and demography rather than superior technology, tactics and institutions.

What accounts for the narrative that the West came to power through general superiority?

JCS: The conventional ‘military revolution’ thesis argues that Western expansion reflected superior technology and institutions, basically guns and states. Supposedly, these advantages were first developed in the fiercely competitive environment of European warfare, and then applied to conquer the rest of the world. I argue this thesis is wrong, for several reasons, but particularly because of a reading of history which starts at ‘the end’ of the story, i.e. Western superiority, and then views the historical record from this supposed end-point. So European victories get a lot of coverage, because Europeans won in the end, whereas the Ottoman, Mughal and successive Chinese empires, which were much more powerful than their European counterparts for most of their existence, can be written off, because these empires lost in the end. But of course everyone loses in the end. The Europeans lost their empires, and someday the United States will lose too. Interestingly, even post-colonial scholars and those most critical of European imperialism tend to play into the narrative of powerful Westerners dominating everyone else.

If the dominance of the West is an aberration to the prevailing global international system, what does a typical system look like?

JCS: Very roughly we can say that we’ve had some sort of global international system for five centuries. In most of Africa and Asia, Europeans weren’t really dominant until the nineteenth century (and this didn’t last long). In the three hundred years before, the typical arrangement was for Westerners to interact with Asian and African polities on a basis of inferiority. But because culture, ideas, and legitimacy are so important for shaping the international system, it’s hard to say what a typical form is. For example, in the late nineteenth century the consensus was that any great power worthy of the name had to have an empire, and so we had an international system of empires, even though most empires lost money and didn’t confer security benefits. Then in a huge change that social scientists spend far too little time thinking about, empires went out of fashion. Now we have an international system of formally equal states, even though most states are pretty hopeless at performing the functions that are meant to justify their existence.

JCS: The first reason was historical: that there was this hugely important undiscovered early modern international system out there, or at least a neglected and misunderstood international system, waiting to be explored. To me what makes international politics in the period 1500-1800 so exciting is that it upends our presumptions of superior, more powerful Westerners dominating everybody else. Sometimes this happened, but for two to three centuries Westerners were more likely to be dominated by non-Westerners, including in Europe. The second reason was a basic rejection of the standard functionalist presumption that on average organizations work well, i.e. efficiently and effectively, because of learning and competition. On the contrary, I think getting the job done efficiently has very little to do with how organizations are structured and how they work. For example, it’s fairly uncontroversial to say that most meetings in universities, corporations, and government bureaucracies are a waste of time (and hence money). But people can simultaneously know this, while continuing to go to and schedule endless meetings, without any plans to change this situation. Organizations, including militaries and states, do not learn to become more efficient, and are not penalized for their inefficiency. In environments of overwhelming complexity, they mainly stick to ritualized ways of doing things, like going to meetings.

What does the book have to say about international politics today and in the future?

JCS: Historians have done an excellent job of showing how the way we think about the past affects our views of the present and the future, and this point certainly applies to international politics. All sorts of things we currently tend to take for granted about international politics are in fact strange, while some important things we tend to think of as strange, and perhaps worrying, are actually the historical norm. The fact that all the world’s polities are today organized as one homogenous type of unit, the sovereign state, is very unusual by historical standards. Looking to the future, if China or other non-Western states were to become the most powerful in the twenty-first century (and social scientists are lousy at predictions so I have no idea if this will happen), rather than being unprecedented, this would in fact be a return to the historical norm in international politics.

J. C. Sharman is the Sir Patrick Sheehy Professor of International Relations in the Department of Politics and International Studies at the University of Cambridge and a fellow of King’s College. His books include The Despot’s Guide to Wealth Management and International Order in Diversity. He lives in London.