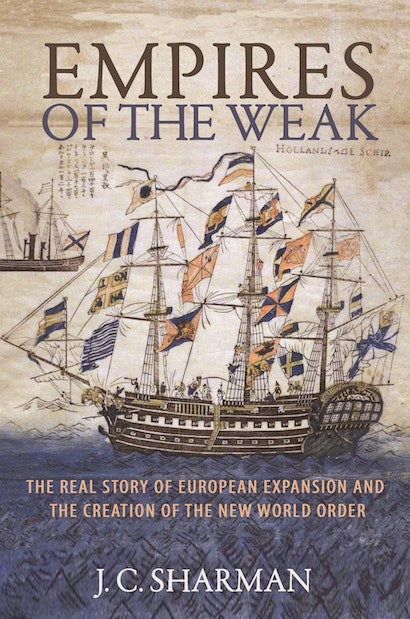 What accounts for the rise of the state, the creation of the first global system, and the dominance of the West? The conventional answer asserts that superior technology, tactics, and institutions forged by Darwinian military competition gave Europeans a decisive advantage in war over other civilizations from 1500 onward. In contrast, Empires of the Weak argues that Europeans actually had no general military superiority in the early modern era. J. C. Sharman shows instead that European expansion from the late fifteenth to the late eighteenth centuries is better explained by deference to strong Asian and African polities, disease in the Americas, and maritime supremacy earned by default because local land-oriented polities were largely indifferent to war and trade at sea.

Europeans were overawed by the mighty Eastern empires of the day, which pioneered key military innovations and were the greatest early modern conquerors. Against the view that the Europeans won for all time, Sharman contends that the imperialism of the late nineteenth and early twentieth centuries was a relatively transient and anomalous development in world politics that concluded with Western losses in various insurgencies. If the twenty-first century is to be dominated by non-Western powers like China, this represents a return to the norm for the modern era.

Bringing a revisionist perspective to the idea that Europe ruled the world due to military dominance, Empires of the Weak demonstrates that the rise of the West was an exception in the prevailing world order.

J. C. Sharman is the Sir Patrick Sheehy Professor of International Relations in the Department of Politics and International Studies at the University of Cambridge and a fellow of King’s College. His books include The Despot’s Guide to Wealth Management and International Order in Diversity. He lives in London.

"[A] provocative argument . . . As a critique of prevailing modes of thinking about global politics, Empires of the Weak succeeds admirably."—Alan Mikhail, New York Times Book Review

"Without assuming prior knowledge, Empires of the Weak, demonstrates the problems with the theoretical assumptions of the military revolution thesis."—Sarah Kinkel, Times Higher Education

"[Empires of the Weak is] intellectually challenging and makes observers think about where they stand before they call in their bets on the sweep of history. . . . people who are willing to challenge their views . . . should relish the book."—I. William Zartman, Rest Journal

"An interesting and thought-provoking narrative. . . . Empires of the Weak is a valuable addition to the underrepresented topic of non-Western military history as part of the growing literature on the underlying causes of the great divergence from the vantage point of global military and political history."—Kaveh Yazdani, International Review of Social History

“One of the shibboleths of traditional explanations for the rise of the West has been an emphasis on early modern European military prowess. Empires of the Weak effectively takes this argument apart, and brings to light its hopelessly Eurocentric blinders. J. C. Sharman has written an excellent, important, and much-overdue book that will change your thinking about the early modern world.”—Sven Beckert, Harvard University

“Empires of the Weak presents a clear, wide-ranging rebuttal to the idea that European military superiority after 1500 was decisive in Europe’s global expansion. The notion of seeing the nineteenth century not as a grand culmination of European victory but as a short period of exception before the return of business as usual in a multicentered world order is brilliant. This book should make a big impact.”—Barry Buzan, London School of Economics

“In this provocative book, J. C. Sharman argues that European expansion between 1500 and 1800 succeeded in the creation of the first global system in world history by submission rather than domination. Tiny maritime expeditions setting sail from Europe showed deference and subordination to the large land empires ruling the Americas, Africa, and Asia. Refracted through this book’s powerful prism, Eurocentrism and multiple modernities appear in a fresh light. A tour de force that delights by a creativity evident on every page.”—Peter J. Katzenstein, Cornell University

“Empires of the Weak is a remarkable book that challenges conventional narratives in international relations. J. C. Sharman’s sharp and insightful analysis draws on historical knowledge to offer a novel understanding of the imperial foundations of the contemporary world order and a compelling new vision for the future. This is an illuminating and persuasive study of global politics.”—Or Rosenboim, author of The Emergence of Globalism

“Lively and engaging, this essential book takes on the claim that a revolution in military power can explain the expansion of European political power from the sixteenth through eighteenth centuries. Instead, Empires of the Weak argues that European expansion had much more to do with deference to local polities and the cultivation of local allies. A pleasure to read.”—Paul K. MacDonald, Wellesley College

“In Empires of the Weak, J. C. Sharman persuasively shows that the triumphalist narrative of European dominance over ‘backward’ polities in Asia, Africa, and the Americas is wrong. Moreover, Sharman challenges the conventional understanding of competition and military innovation. By illuminating the European encounter with the Asian great powers, his argument raises skepticism regarding the continuation of Western dominance of the international system.”—Hendrik Spruyt, Northwestern University