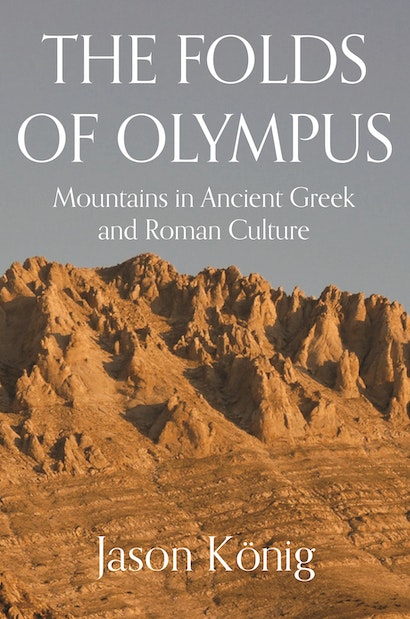 The Folds of Olympus
Available in 2 editions
Buy This

The mountainous character of the Mediterranean was a crucial factor in the history of the ancient Greek and Roman world. The Folds of Olympus is a cultural and literary history that explores the important role mountains played in Greek and Roman religious, military, and economic life, as well as in the identity of communities over a millennium—from Homer to the early Christian saints. Aimed at readers of ancient history and literature as well as those interested in mountains and the environment, the book offers a powerful account of the landscape at the heart of much Greek and Roman culture.

Can you tell us a little about what led you to write the book?

JK: I have always loved spending time in the mountains and reading about the history of mountains and mountaineering. I never set out with the intention of joining up those interests with my work as a classicist, but it just occurred to me at one point that premodernity, and especially the cultures of the ancient Mediterranean, tend to be completely ignored in that increasingly vast body of writing. I then became more and more fascinated as I tried to make sense of the role of mountains in classical antiquity, and especially in Greek and Roman literature.

How are ancient and modern mountain writing related to each other?

JK: A lot of mountaineering writing is still dominated by a very old narrative, dating back to Marjorie Hope Nicolson’s wonderful 1959 book Mountain Gloom and Mountain Glory, and before that to nineteenth-century mountain writers like Leslie Stephen. On that account premodern people saw mountains as places of fear or ugliness; from the mid-eighteenth century onwards, by contrast, they came be to seen as places of beauty and fascination, associated with newly fashionable aesthetic concepts like the picturesque and the sublime quite different from anything that had come before. Of course some things did change in the eighteenth and nineteenth centuries, not least in the invention of mountaineering as a leisure pursuit, but I have become more and more convinced that that is a very problematic narrative. For one thing it can lead us to miss the many continuities between ancient and modern engagement with mountains. To take just one example, it becomes clear, when we take the trouble to look, that mountains in classical antiquity were regularly described with the language of beauty and with images that approximate very closely to postclassical notions of the sublime. At the same time this narrative can also lead us to underestimate the differences: if we analyse premodern responses to mountains only in order to see how they measure up to modern practices of mountaineering, or to modern habits of landscape appreciation, we can end up failing to understand them on their own terms. Either way, that traditional narrative can lead us to miss the fact that ancient Greek and Latin literature often represents mountains in fantastically sophisticated and challenging ways—and it’s the challenge of drawing out that sophistication that has motivated me above all in the writing the book.

Can you give an example of an aspect of ancient engagement with mountains that is alien to its modern equivalents?

JK: Perhaps the obvious place to look for that is in the religious function of mountains in the ancient Mediterranean. For many millennia, especially in the Greek east and Asia Minor, mountains were places of sacrifice: sacrificial processions would wind their way uphill from nearby cities, and the communities on the plain below would be able to see the smoke of sacrifice rising up from the mountaintops above them, as a celebration of communal identity. Those traditions play an important role in a lot of Greek literature, from Homer’s Iliad, which has regular references to mountaintop sacrifice, through to the Roman-period Greek travel writer Pausanias, who charts a culture of mountain religion still thriving nearly 1000 years later. Those traditions are then inherited and adapted in early Christian culture, which appropriated the holiness of the mountain summits in an extensive pilgrimage industry—we can see that in a travel text by the female pilgrim Egeria, who travelled to Mt Sinai and other holy mountains around 400 CE—and in countless stories of saints inhabiting mountain territory outside civilisation.

Does that mean that mountains were viewed above all as places of wilderness and the divine in the ancient Mediterranean, removed from day-to-day life?

JK: Up to a point that is right, but there is also a huge volume of ancient writing about mountains as places of work and habitation, for example in ancient ethnographic writing about mountain peoples, or in a text like the Euboian Oration of the Greek philosopher and orator Dio Chrysostom. He describes being shipwrecked on the island of Euboia and receiving hospitality from a community of hunters in the mountains: he charts their precarious attempts to preserve their own way of life against the encroachment of urban culture. His account may well be largely or entirely fictional, but it is still a powerful attempt by one ancient author to project a sympathetic image of a mountain community.

Can looking at ancient mountains help us to understand ancient attitudes to the environment?

JK: I think so, yes. I think these texts give us a very powerful way into understanding ancient environmental thinking. One of the things I have come back to over and over again in writing the book is the tension between two quite different ways of understanding mountain territory: on the one hand mountains as places of human and even urban control, and on the other hand mountains as places outside human civilisation with the capacity to overwhelm human agency. A lot of ancient writing on mountains oscillates between those two different approaches—and I think that’s emblematic of a much broader conflictedness in ancient conceptions of human-environment relations, which perhaps can even function as an imaginative resource for envisaging our own relationship with our environments in the present and the future.

To what extent is the book grounded in a personal engagement with the mountains of the Mediterranean?

JK: Many of the mountains I look at in the book are territories of the imagination, from Greek mythical narratives like the Homeric poems and Greek tragedy onwards, but it mattered for ancient authors and readers that they were also at the same time real places of human presence and human experience: people did spend time in the mountains in classical antiquity, for all sorts of different reasons. I am fascinated too by the present and future history of these places. The mountains of Greece in particular are extraordinary places to visit, not least the summit altar sites. Mt Lykaion in Arkadia is a great place to start. It has been more thoroughly excavated than any other equivalent site. If you go up to the summit you get amazing views to the other mountains of the Peloponnese on all sides. But you can also look down at your feet, and see fragments of animal bones scattered all over the grass, the remains of many millennia of sacrifice at the ancient altar of Zeus. I hope that this book will at least in a small way encourage more people to visit these amazing places.

Jason König is Professor of Classics at the University of St Andrews. He lives on the east coast of Scotland.