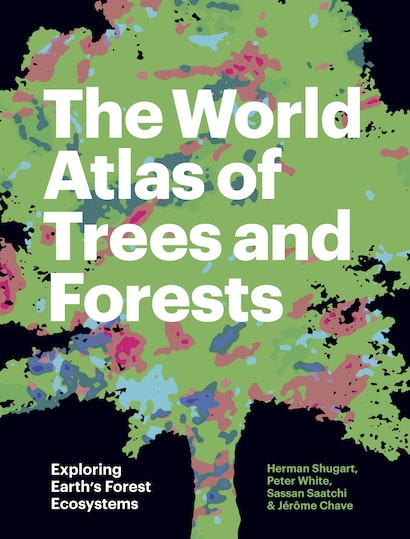 Forests and the trees that comprise them are understood at different scales of space and time. This is true for professional and recreational naturalists, research scientists, hikers, conservationists, eco-tourists, and ecologists. When one looks at a forest, what is seen? On a large spatial scale, one might gaze across the peaceful vista of forest landscapes stretching across mountain slopes, before immediately shifting their focus—on a much finer scale—to the symmetry of arrangement in the few leaves on a tree seedling beside one’s boot. Forests can be appreciated, almost simultaneously, at very different spatial resolutions. The same holds with time scales as well. One can meditate on the antiquity of large, tall trees that have taken centuries to develop, marvel at the beauty of forest floor mushrooms and spring flowers that might last only a week or less, or glimpse the beauty of a forest bird in flight, flashing by for just a second. Time and space scales can interact. The mass flowering of fireweeds, whose seeds germinate after a wildfire, can reveal and delineate the extent of a recent wildfire. A knowledgeable ecologist can “read” the fire history of a forest landscape from the even-aged patches of trees, burned by different fires across centuries.

If one walks up into the Joyce Kilmer Memorial Forest up along the Little Santeetlah Creek, they would pass American Chestnut (Castanea dentata) logs two meters in diameter. These are the remains of trees that died en masse from an introduced fungal blight almost a hundred years ago. They still lie on the ground because were so large and because their wood is remarkably rot-resistant. One eventually enters a grove of Yellow Poplars (Liriodendron tulipifera), some over three meters in diameter and so tall that they disappear into the hazy Blue Ridge Mountain mist. This wilderness—altogether greater than 15 square kilometers—is a perfect memorial to Joyce Kilmer and his lyric poem, “Trees”.

We are visual creatures. To say, “I see …” connotes understanding as often as it does vision. We create by exercising our mind’s eye to comprehend and imagine. When one pictures a tree, what does the mind see? From Kilmer’s “Trees”, a tree “looks at God all day, And lifts her leafy arms to pray…”. The trees in his memorial forest are tall, woody plants with single trunks and branches to support a leafy canopy. However, there are “trees”—or least tree-ish plants—with multiple trunks. Banyans, often figs (Ficus species), drop prop-roots from their branches that contact the soil and eventually grow into trunks, allowing the self-construction of a multi-trunk spreading tree that can occupy well over a hectare. Some trees do not have branches. For example, branchless palm trees grow fronds that combine the photosynthesis function of leaves and additionally have the support function of branches. The fronds of the palm Raffia regalis can be up to 25 meters long and 3 meters wide. Some trees are evergreen with leaves all year. Others are deciduous, shedding their leaves seasonally.

The tree life-form has evolved multiple times in the history of life on Earth. “Tree” is not a “natural” taxonomic unit. There are many unrelated plant species in the collection of plants called trees. Trees are tall woody plants. They grow tall by extending their branches from buds at the ends of twigs (primary growth) and by thickening their trunks and branches (secondary growth). Trees are self-supporting, unlike vines. They grow tall by being monopodial with single stems, unlike shrubs, which have multiple stems. Trees, in the strictest sense, have all these attributes, but there are tall plants that lack some of these features. These latter plants are still often thought of as trees, or at least as tree-like.

A forest is an area dominated by trees, and since “tree” is biologically complicated term, “What is a forest?” carries this complexity and more. The term “forest” originates from ancient law, and more precise definitions of the word are important for modern environmental policy. “Forest” etymologically originates from the Latin foris, meaning “outside”. These were lands outside cultivation that, in medieval times, were royal property—typically the royal game preserves. This is found first in the laws of the Lombards (568 to 774 CE) and in the capitularies of Charlemagne (724 to 814 CE) with forest (“foresta”) delineating royal reserves. Professor H.G. Lund has found 1713 definitions of words that might be translated as “forest” in over 500 languages; in over a thousand additional cases, used at international, national, state, provincial or local levels, “forest” is defined by the percent coverage of an area by trees of a certain height or areal extent.

Looking beyond this haze of different definitions, the value of forests is writ large by the services that they provide. Look closely and see forest processes supplying the micro-niches of food, shelter and environments, which allow the survival of a diverse array of other plants, animals, and microbe life. The value of forests can be seen in the clean water flowing from a forested watershed. When the first trees and forests grew on land, the ecological processes storing organic carbon-rich materials in living trees and in organically rich soils changed the chemical content of the atmosphere. The Earth’s atmosphere is still changing from the activities of modern human industrialization. We need more than ever to comprehend the state and the changes of the planetary ecosystem. The statistical analysis of properly collected forest data can reveal patterns that one might have missed. Computer models of forests can allow us to synthesize what we know to envision possible forest futures in response to novel change. Our “seeing” global and continental forests and their changes is being augmented by new eyes—powerful new satellite and airborne instruments with the potential to increase our knowledge of forests globally, regionally, and locally. The need for increased insight into forest function and structure remains an existential challenge.

Herman Shugart is the W. W. Corcoran Professor of Natural History (Emeritus) at the University of Virginia. His books include How the Earthquake Bird Got Its Name and Other Tales of an Unbalanced Nature. Peter White is Professor of Biology (Emeritus) at the University of North Carolina, Chapel Hill. Sassan Saatchi is senior scientist at the Jet Propulsion Laboratory at the California Institute of Technology and adjunct professor at UCLA’s Institute of the Environment and Sustainability. Jérôme Chave is director of research at the National Center for Scientific Research (CNRS) in Toulouse, France.