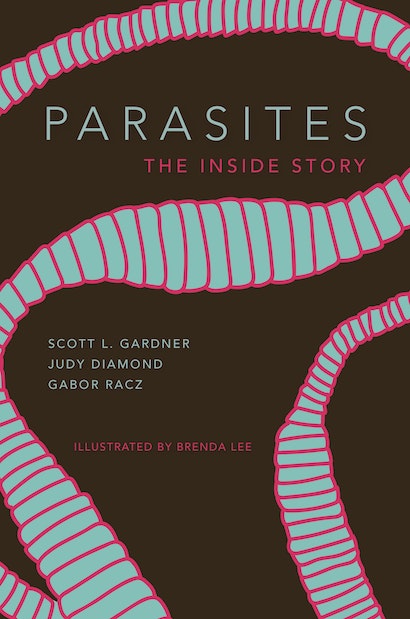 Parasites
Available in 2 editions
Buy This

One of the most fascinating things that a young person can experience in the complex realm of biology is the discovery of an animal living inside another animal. If this discovery takes place at an early enough stage in the development of a young person’s view of the world—that is, before the rules and regulations of what society thinks are good and bad in biology are perfused into labile minds—the first discovery of motile trematode worms living inside a frog’s lung or of tapeworms inhabiting a rodent’s gut is truly unforgettable. The questions that arise when these kinds of animals are encountered for the first time are innumerable and, if answered carefully, may lead to even more questions and, hopefully, more answers.

Even though the recognition of parasites had a recorded beginning in ancient Greece and China, there is no doubt that parasites were known as part of the natural fauna by the earliest of the nomadic peoples. For example, in the early 1950s, the nomadic Nunamiut Eskimo hunters in the Brooks Range of Alaska routinely recognized the strobilar (adult) stages of cestodes in the intestines of carnivores and other mammals, and they recognized the larval stages of the cestodes in the viscera of the caribou that they prepared for food and shelter. As scientific knowledge of the natural world increased during the early 1800s, studies of the natural history of parasites—what these animals were and how they got where they were—were becoming more common. It was soon discovered that some parasites had very complex life cycles and that they were extremely common in nature. Through time, as students of parasite diversity studied transmission patterns, life-histories, and pathologies, and as researchers put these together in phylogenies much later, more knowledge was generated that enabled new testable ideas to develop in ecology and evolution.

In the current era, many students of biology first begin to study parasites and parasitism via the initial study of the ecology, behavior, or systematics of a species of free-living organism. While studying a free-living animal or plant (pick your favorite species), one discovers that there may be several species of parasites occurring in or on (or likely both) their study animals. True parasitologists—those who are intrigued with the parasite’s biology and intimate associations—may become intensely focused on a single group, like tapeworms of rodents or gregarines of beetles or damselflies. Other students of parasitology may focus on the complete endoparasite fauna of a group of insects, fish, mammals, birds, amphibians, or reptiles.

Parasitologists are interested in the world that is both micro- and macroscopic. They look at free-living animals with fascination and often find them to contain literally thousands of individual parasites. This is especially true of the coccidian parasites of the genus Eimeria (Apicomplexa: Eimeriidae) that occur in mammals and birds. The observant parasitologist, using a microscope and examining collected animal feces, may see thousands of oocysts passed by a bird (perhaps Eimeria tenella) or from a single fecal pellet from a rodent (maybe a species of Isospora or Eimeria). Collecting parasites in nature involves obtaining wild animals from various habitats as they do their thing. If the work is being done during an expedition, the potential host animals to be studied must be collected and euthanized in a humane fashion following the civil laws of region, country, or state where the work is being conducted. In short, parasitologists who focus on the natural history, ecology, and biodiversity of parasites go to the field (woodlands, islands, deserts, tundra, puna, steppe, desert steppe, cerrado, grasslands, oceans, streams, rivers, or lakes), collect various animals, perform necropsies (the act of searching for any parasites living in or on a specimen of free-living animal), observe, preserve, and study the parasites that are found—and this is just the beginning.

When the specimens are brought back to the laboratory for study, it is the responsibility of (and an honor for) the well-trained parasitologist to identify the species of parasite she has found. This can be done using morphological characters (what the parasite looks like), or she can perform an identification by extracting DNA from the specimens, amplifying it using the polymerase chain reaction (PCR), and obtaining a DNA sequence. It is then up to the well-trained parasitologist to catalog what is known, deposit the material in a recognized museum collection, and then put the DNA sequence and description of morphology into the literature stream through publications in journals, thereby making the new species available as testable hypotheses of speciation via evolution. The practitioner of parasitology then can define the questions that may have driven the expeditionary surveys in the first place using parasites as probes for biogeography, biodiversity, indicators of health of ecological systems, phylogenetic systems, taxonomy, ecological fitting, or questions of ecology or systematics.

The definition of a parasite and its host is essentially one of biological tension between two organisms. This is because with the classical definition of a parasite—as an organism living on or in another organism and usually causing some harm to the host—parasites, of any kind, would seem to be bad to have around. However, parasites, like the many species of trematodes, are essential parts of the biosphere. Trematode larvae contribute to energy flow through ecosystems, and they make up huge amounts of biomass in communities like salt marshes and freshwater ponds and marshes. Because there are so many species of parasites distributed over so many animal and plant groups, the consensus among biologists is that there are far more species of parasites in the world than there are free-living organisms. Some parasites may even help out their hosts in some ways by assisting in digestion or attacking other species of invading parasites. There are still so many species on earth yet to discover, and we are losing both free-living forms and their parasites faster than we can name them and discover their potential due to habit destruction. Maybe this will serve as a general wake up call to document, assess, monitor, and act in order to preserve species on earth before it is too late.