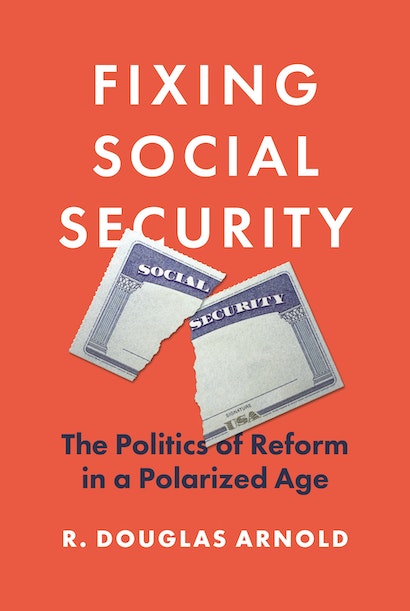 Since its establishment, Social Security has become the financial linchpin of American retirement. Yet demographic trends—longer lifespans and declining birthrates—mean that this popular program now pays more in benefits than it collects in revenue. Without reforms, 83 million Americans will face an immediate benefit cut of 20 percent in 2034. How did we get here and what is the solution? In Fixing Social Security, R. Douglas Arnold explores the historical role that Social Security has played in American politics, why Congress has done nothing to fix its insolvency problem for three decades, and what legislators can do to save it.

Why does Social Security need fixing?

RDA: The fundamental problem is that Social Security’s beneficiaries (retirees, spouses, survivors, and disabled workers) now collect more in monthly benefits than Social Security’s taxpayers (workers and their employers) contribute in payroll taxes. To cover this shortfall, the program is devouring its $2.9 trillion trust fund.

Once the trust fund empties, in just over a decade, benefits will revert to whatever payroll taxes can then support. Absent congressional action, 81 million beneficiaries will face immediate benefit cuts of 22 percent.

One reason for the shortfall is that people are living longer. Life expectancy for 65-year-olds has increased by nearly seven years since Social Security’s inception, while the full retirement age has increased by only two years. Paying benefits for an extra five years is expensive.

A second reason is that women are having fewer children. Fertility averaged 3.3 children per woman during the baby boom generation, which is now retiring, but averages only 1.8 children today. Fewer children mean future workers to support each retiree.

A third reason is that Congress last modified Social Security’s tax and benefit formulas in 1983. Four decades is a long time to leave any program on autopilot.

Congress has known about the solvency problem since 1994, when the actuaries first forecast that it would occur as the boomers retired. So far, legislators have done nothing to address the problem.

What are the options for fixing Social Security?

RDA: The options available today resemble the options that Congress adopted in two previous solvency crises. In 1977, legislators shielded both current and future beneficiaries from benefit cuts by increasing both the payroll tax rate and the maximum taxable wage base—the ceiling on wages subject to that tax.

In 1983, legislators reversed course, increasing taxes only for self-employed workers, who had long enjoyed a preferential tax rate, while cutting benefits extensively. Among other things, they reduced benefits for upper-income beneficiaries, postponed cost-of-living adjustments for everyone, and raised the full retirement age from 65 to 67.

Legislators today face a rich array of options. Here are four examples—two that would raise taxes and two that would cut benefits—along with actuarial estimates of their long-term effects on solvency.

Some people propose reinventing Social Security by making it more like the private retirement system. They would transform the current pay-as-you-go system—where current workers support current retirees—into an advance-funded system, where current workers would contribute to their own individually controlled investment accounts that would later support their own individual retirement benefits. President Bush proposed such a plan in 2005, but the Republican-controlled Congress refused to consider it.

The principal hurdle with such plans—often called privatization plans—is that workers’ taxes are currently used to support today’s retirees. Diverting those contributions to workers’ individual accounts leaves nothing for current and near retires who have spent decades contributing to Social Security. Most privatization plans would require that the government borrow funds for many decades to fund the transition to individual accounts.

Why has Congress done nothing to address the solvency problem?

RDA: First, legislators are procrastinators. They avoid tackling many long-term problems. They postpone acting on climate change. They regularly pass budgets just as funding runs out. With Social Security, nothing bad happens until 2034, so legislators feel little pressure to address the solvency problem today.

Second, every option would impose costs on someone—workers, employers, retirees, near retirees—and legislators fear electoral retribution from all these groups. Doing nothing imposes no immediate costs on anyone.

Third, and most seriously, Democratic and Republican legislators are increasingly polarized on most major issues. They also disagree fundamentally about taxes. Democrats seem comfortable raising taxes, especially to preserve a valued program like Social Security. Most Republicans have signed the so-called Norquist pledge, promising never to support tax increases.

With Democrats and Republicans so deeply polarized, building a coalition to fix a long-term problem is a daunting task.

Where do citizens stand on Social Security reform? Are they as polarized as legislators?

RDA: Ordinarily, polarized policymakers produce polarized citizens. We see that in health care, welfare, climate change, and the environment. The silver lining for Social Security is that Democratic and Republican citizens are not polarized. The program remains popular among virtually all groups: Democrats and Republicans, workers and retirees, the young and the old, the poor and the affluent. Moreover, both Democrats and Republicans seem willing to support everything from gradual tax increases to modest benefit cuts to achieve solvency.

How can it be that party leaders are increasingly polarized on Social Security, while citizens who identify with the parties are not? One explanation is that Social Security is more immediate and real to people than most other programs. People experience the program through daily living and family life, first as children, watching their grandparents collect benefits, then as young workers, watching part of their wages diverted to Social Security, later as older workers preparing for retirement, and finally as retirees, discovering how central these benefits are to their well-being. Many programs benefit others. Social Security benefits two much-admired groups: self and kin.

It also helps that Democratic and Republican elites have not been fighting about Social Security for some years. In the early 1980s, when elites last fought about solvency reform, polarization among citizens increased, before later subsiding. It also increased in 2005, when President Bush proposed partial privatization and Democratic officials led the opposition, before again subsiding.

What role should presidents play in Social Security reform?

RDA: Presidents do not have strong records designing politically appealing solvency plans. President Reagan proposed such severe Social Security cuts in 1981 that the Senate unanimously condemned them. President Bush’s initial 2005 proposal to create individual accounts was all about privatization. It did nothing to close the solvency gap. And now President Biden has tempted Democrats away from the arduous path of solvency reform.

A year before the 2020 presidential election, 90 percent of House Democrats cosponsored a plan, introduced by Representative John Larson, that actuaries estimated would make the program solvent for 75 years. The bill would raise half the necessary revenue by increasing the payroll tax rate and half by targeting affluent workers. It would also enhance some benefits.

A year after the presidential election, 90 percent of House Democrats cosponsored a new bill that substituted benefit boosting for solvency reform. Although the plan purports to extend solvency by four years, that is only because the benefit-boosting provisions would expire in five years. If Congress later makes these provisions permanent, as proponents clearly hope, the bill would contribute nothing to long-term solvency.

The Democratic shift began during the 2020 presidential primaries, when several candidates competed with Bernie Sanders, the 2016 runner-up, by outpromising him. Sanders proposed increasing Social Security benefits for some beneficiaries. Soon, three competitors—Biden, Buttigieg, and Warren—released plans with larger benefit increases. Meanwhile, Joe Biden pledged not to raise taxes on anyone earning less than $400,000—not for Social Security and not for anything else. The other three candidates were willing to raise taxes on less affluent folks.

Eventually, President Biden’s preference for benefit boosting spilled over into Congress. Moreover, his refusal to raise the payroll tax rate made the original 2019 bill untenable. Why should legislators support tax increases that the president opposes?

RDA: In the late 1990s, I served on a national study panel, sponsored by the National Academy of Social Insurance, that examined Social Security privatization. At the time, Washington was alive with proposals for fixing the just-discovered, long-term actuarial deficit. There were incremental plans and privatization plans, think-tank plans and commission plans, Democratic, Republican, and bipartisan plans.

The fixes then were easier than today’s fixes because insolvency was many decades in the future. Legislators could have implemented reforms gradually—slowly raising taxes, slowly raising the retirement age, gradually paring back benefits, or gradually introducing partial privatization. Moreover, the baby boom generation was still young and could have contributed more to the solution. The youngest boomers were in their thirties and had most of their careers ahead of them, during which time they could have paid higher taxes, saved more, or prepared for shorter or less lucrative retirements.

The result is a book that explores how legislators made and remade Social Security from 1935 to 1983, examines the evolution of public opinion from 1936 to 2021, closely examines the most recent attempt to modify Social Security in 2005, and analyzes the incremental options still available. It also identifies what citizens and groups can do to encourage legislators to act now.

R. Douglas Arnold is the William Church Osborn Professor of Public Affairs Emeritus at Princeton University. His books include Congress, the Press, and Political Accountability (Princeton), The Logic of Congressional Action, and Framing the Social Security Debate.