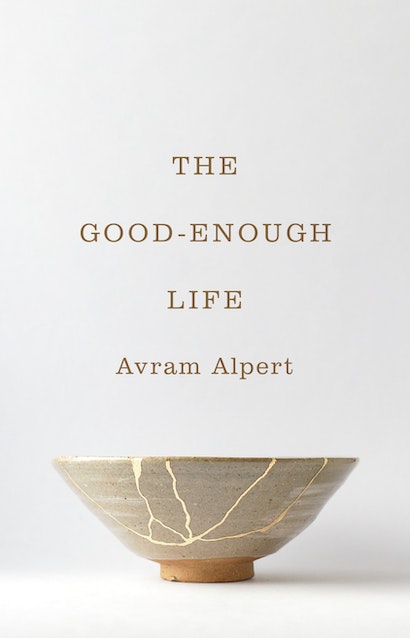 The Good-Enough Life
Available in 3 editions
Buy This

The list of crises we face today seems to grow daily. As if inequality and civil wars and global warming and refugee crises weren’t enough, we have also grappled with a global pandemic and the sudden threat of nuclear war. When faced with such crises, it is not uncommon, and perfectly logical, to hear calls for investments in cutting-edge, technological innovations that can protect us from climate change, increase crop yields, improve health outcomes, and spur economic growth. The success of these technologies promises a safer and greener future.

A relentless focus on technological innovation alone, however, can create as much harm as good. The kinds of innovations that are most needed today are as much in ourselves and our societies as they are in our inventive prowess. If we cannot work collectively to make a world that provides genuine forms of meaning, purpose, and decency for everyone—what I call a “good-enough world”—then our technological innovations will simply lead into the next major set of crises. In fact, we can achieve greater innovations simply by working together in a collaborative and ethical manner than if we continue on our current path of competitive greed.

Most contemporary pursuits of innovation aim to find the most talented people in the world and let them compete with each other to win the vast rewards that can come with their inventions. On the surface, this seems to make sense. Obviously to make progress we need talented people. And, we assume, those people need to be offered incentives in the form of great wealth and power. Otherwise, they would not work so hard or so quickly.

But does this image of how progress occurs really make sense? The prevailing model assumes that, unless they are competing for riches, humans are willing to let the planet die before they will extend themselves to help bring about change. If you ask most research scientists or activists working on climate change, you will find that in fact, almost none of them are doing it for the money. They are doing it because they believe in another kind of value system, one that is about the value of life itself.

This other value system not only motivates great numbers of talented people; it also helps ensure that the resulting innovations actually serve our planet. Consider messenger RNA vaccines. Although they were developed with billions of dollars in support from public funding and collaborations between scientists, the monetary rewards have largely gone to a few corporations. The results of this process show both the logic of our competitive system and its terrible dangers. Perhaps incentives for profit led to some part of the final breakthrough. However, the continued seeking of profit has meant that companies have been slow to get vaccines to low-income countries (LICs) and have refused to allow generic versions of their products to be reproduced and created at scale. As of March 2022, while 70% of people in high-income countries had one dose of a vaccine, that number is only 14.3% in LICs. Such discrepancies have led to uncounted numbers of preventable deaths. They harm rich nations as well by allowing variants to grow and spread, while this damage to public health, in turn, undercuts the global economy.  A 2021 report by The Economist Intelligence Unit predicted that the loss caused by vaccine nationalism alone would be upwards of $2.3 trillion over the next three years.

If negative feedback loops are occurring with vaccines, what is to stop them from happening with advanced climate technology? Will rich nations and corporations refuse to share their advances equitably? Bill Gates, in his 2021 book How to Avoid a Climate Disaster, in fact encouraged this, saying that one incentive for advanced industrial nations to pour money into climate solutions was that they could then sell these innovations to poor countries (likely with high-interest loans provided by wealthy banks in their home countries). Again, not only is such a position unethical, but it may also damage the likelihood of success. While profit motives may help incentivize creating green technology, they also undercut transitioning away from fossil fuels. Many good ideas are excluded because they do not conform to the current demands of profit and power. For example, according to a major global model for how to decarbonize the economy, from a team of more than twenty authors, we may not even need many new technologies to avert climate catastrophe. What’s really needed is the political will to decrease wasteful consumption and transition to the already-existing green technologies that can solve this problem in the short term.

Unfortunately, political will is also thwarted by the inequality that top-down innovation creates. Philosophers going back to at least Aristotle have known that inequality breeds resentment, distrust, and civil strife. Recent research in the social sciences has repeatedly confirmed this: “A large body of empirical and theoretical work has demonstrated that inequality and polarization correlate and are likely causally linked.” The most obvious solution that derives from this research is to work toward a world in which no one has too much, and everyone has enough, so that we all feel rewarded and recognized as contributors to the value and meaning of human life.

Rather than viewing the path to innovation as a competitive quest for fame and glory, then, we would do better to think about what kinds of innovations in our moral and social worldview can create technological progress without all of these negative repercussions. I have suggested that we might think about that innovation as the creation of a “good-enough world.” The new world won’t be perfect. Because humans have varying desires and needs and capacities, we are always going to have some imperfections and differences. Some people might be a little wealthier or have a little more fame. Sometimes people will feel excluded from important decisions that affect them. People will still experience disease and unrequited love and natural disaster. Things are inevitably only good enough, and this isn’t always a bad thing: imperfection is part of our individuality and complexity as humans.

But in the midst of that imperfection, we can still work together to ensure that everyone has decency and sufficiency, that they have a say in much of their lives, and that they have the opportunities to form meaningful connections with others as well as explore the depth and wonder of their inner lives. Achieving this kind of world begins by simply reorienting ourselves: away from the pursuit of individual greatness and reward, and toward the creation and maintenance of good enoughness for all. Of course, different societies and different individuals will want different things, and that’s why there is no cookie-cutter set of definitions about what defines “good” and “enough.” We will have to work collaboratively and democratically to find what works well enough for everyone, but we can begin to imagine the kinds of social and political innovations that would make this kind of collaborative work possible.

Some political scientists, for example, have suggested innovative forms of democratic gatherings that involve large groups of citizens to create policy changes. These can be, for example, forums of randomly chosen citizens who work with experts to understand the full complexity of an issue. In this way more people can have a say in the policies that affect their lives while also diminishing the corruption created by vested interests. Meanwhile, some political economists have developed economic models that show how by investing more equally in more people, we can encourage more creative solutions and innovations while also maintaining higher social cohesion and trust. While competition to become wealthy means only some people can contribute their talents, collaboration to ensure good-enoughness for all means that more people can work together to produce innovations. As scientists who worked collectively on developing synthetic rubber to aid the US military during World War II reported, the solution was “the result of a thousand little discoveries made by a small army of well-funded industrial chemists. Those scientists remembered it as a golden age, when men who had formerly labored as rivals in different companies could collaborate with a shared sense of purpose.”

We might learn from this example as we think about green innovations today. Rather than competing to become wealthy from them, we could work together with a real planetary purpose. And we might do so even more quickly in a more equitable world. After all, research has shown that the more social equality we have, the more likely we are to act on climate change. Why? Researchers continue to debate the reasons, but one theory is that people who think they are at the top of the social hierarchy are more likely to think they can escape the ravages of climate damage. Increasing equality can help us recognize that, as Heather McGhee puts it, we all live “under the same sky.”

The final advantage to this kind of good-enough world is for ourselves. We live today under tremendous pressure to either rise to the top or sink to the bottom. We are experiencing epidemics of stress, anxiety, and loneliness. And we are neglecting our fundamental bonds to each other as we spend more and more time at work. In so doing, we are not living to our full potential as beings dedicated to making meaning through connection and creativity. In a good-enough world, we would not compete to keep each other out; therefore, we could work together to bring more people in. Individually we could work less, while socially gaining as much, if not more. This would both increase our bonds with each other and give us the time we need to explore and enjoy our lives.

Innovation will always be a key part of addressing our vast crises. But the innovations we need are as much in our personal, social, and political lives as in our technologies. A good-enough world can make this possible.

Avram Alpert is lecturer in the Writing Program at Princeton University and coeditor of Shifter magazine. His books include A Partial Enlightenment: What Modern Literature and Buddhism Can Teach Us about Living Well without Perfection. His work has appeared in publications such as the New York Times, the Washington Post, and Aeon. Twitter @avramalpert