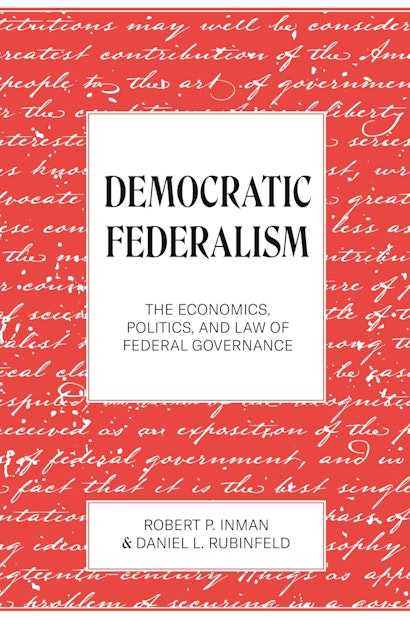 Around the world, federalism has emerged as the system of choice for nascent republics and established nations alike. In this book, leading scholars and governmental advisers Robert Inman and Daniel Rubinfeld consider the most promising forms of federal governance and the most effective path to enacting federal policies. The result is an essential guide to federalism, its principles, its applications, and its potential to enhance democratic governance.

Certainly federal governance made sense for the thirteen colonies at the adoption of the U.S. Constitution in 1787. But what about today, in this global economy and when most important problems seem national in scope?

Robert Inman and Daniel Rubinfeld (RI/DR): As the intellectual forefathers of Democratic Federalism—a fact we acknowledge often in our book—James Madison and Alexander Hamilton understood the power of federal governance for managing a democracy of citizens with diverse interests and resources. Their powerful insight was to structure democratic governance around two key institutions: separate state governments each with their own democratic leadership and (importantly) independent powers of taxation and spending to achieve state goals, and then a national government with a national president and independent court but with a co-equal national legislature of elected state representatives. The new form of democracy was designed to overcome the dysfunctional localism of independent states and a weak national confederation. Using the tools of contemporary social sciences, our project seeks to evaluate the performance of the Madison-Hamilton vision for managing today’s problems. And certainly today’s problems are vastly different from those of 1787, both in scale and scope: Protecting global trade but responding to its national consequences, ensuring fairness and equal opportunities but retaining the democratic and economic advantages of local governance, and encouraging an open and deliberative national government capable of finding policies that are efficient yet share benefits widely.

Can you give us examples where the lessons from Democratic Federalism seem particularly useful for today’s problems?

RI/DR: Today managing the COVID-19 pandemic and its consequences comes immediately to mind. As a communicable disease, COVID-19 impacts society at all three levels of federal governance: community, region, national. The impact of the disease affects each community differently: rural or urban, rich or poor, young or old. Local communities will know best the needs of their citizens and can respond most appropriately and quickly. Yet communities do not exist in isolation; residents travel and not all communities have the resources needed to treat their patients. Here informal regional solutions have value—compacts we call cooperative federalism—and the efforts by Northwest and Northeast states to cooperate on the sharing of hospital facilities and equipment and on rules for “opening the economies” are examples. Finally, a responsive national government will be needed to provide those goods and services that benefit all residents: Public health information for prevention and to control the spread of the illness, funding for basic research for treatment and prevention, and the regulation of markets for scarce inputs (e.g., ventilators, masks, testing) to prevent “beggar-thy-neighbor” price competition between the states. Finally, as we seek to contain the virus, only the national government has the resources to provide income protection for those losing jobs, to replace lost state and local government revenues, to offer credit for small and large businesses threatened by bankruptcies, and to provide the additional funding that may be needed to stimulate aggregate demand for a national economic recovery. Democratic Federalism provides guidance for how best to allocate these responsibilities across each level of federal governance.

Solving each of the problems you mention—addressing the health consequences of the pandemic, helping families, businesses, and cities and states overcome their loss of incomes, and re-starting the economy—are deeply political. How can the analysis in Democratic Federalism help us to find policies we all—or a significant majority—might support?

RI/DR: We are really hoping Democratic Federalism will be seen as more than a textbook—though that was certainly one aim—but also as a guide for how best to use the institutions of federal governance for finding workable policies to hard problems. By “workable” we mean policies that not only address the substance of the problem but can also offer a basis for agreement among competing points of view. More often than not, disagreements are not over what “works” but who is in charge, who pays, and who gets the benefits. Democratic Federalism provides a framework for sorting through these points of disagreement, what we call the Federalism Impact Statement or FIST. FIST is a worksheet that categorizes the benefits and costs of assigning policy to levels of government by assignment’s consequences for economic efficiency, democratic participation, and protection of rights and liberties. Rather than setting policy by competing for money and influence, FIST aims to channel debate into deliberative discussions over what really matters, the consequences of policy for citizens’ lives. We offer examples by applying FIST to current debates over Brexit, environmental policy, tax reform, welfare reform, corporate governance, the regulation of business, and the EU’s bailout of the Greek government.

The book makes a strong case for an inter-disciplinary approach to the study of federal governance. Why is an integrative approach important?

RI/DR: We want to stress at the outset that we are not offering a “super-theory” for democratic governance. Rather, we seek to draw from the powerful insights of each discipline—economics, political science, and legal theory—for what they have to teach us about how the institutions of federal governance work to enhance, or at times undermine, government’s policies. The three disciplines evaluate the same federal institutions but often with an eye on their own particular objective: economists on efficiency, political scientists on democratic deliberation, and legal scholars on rights and fairness. Each discipline’s unique focus and the need for interdisciplinary conversations became evident to us in a very real way while serving as advisors to the Constitutional Commission charged with designing the institutions for tax and spending policies as part of the new South African constitution. Other Commissions had been charged with drafting the chapters for the bill of rights, for presidential, legislative, and judicial powers, and for the structure of the public administration. We were struck by how little we understood of the others’ agenda, and perhaps they of ours. Thus this book.

Your analysis makes the case for democratic federalism. Should all societies be moving to adopt federal institutions?

Our analysis of the new federal democracy of post-apartheid South Africa is a particularly compelling case study. But for all its virtues, we want to stress that democratic federalism may not work for everyone, a fact made most evident by the dissolution of the once federal states of Yugoslavia, Czechoslovakia, and the Soviet Union when given the chance at their own democracies. Nor are the institutions of democratic federalism necessary when citizens share common values and have nearly identical tastes for the appropriate role of government in private life. The case for democratic federalism is most persuasive where citizen preferences for public goods and services vary but where there is sufficient goodwill and respect for these differences that compromise is possible. It will be for these societies that democratic federalism might offer its greatest benefit. How to design, administer, and protect its institutions is the goal of this book.

Robert P. Inman is the Richard K. Mellon Professor Emeritus of Finance, Economics, and Public Policy at the University of Pennsylvania, where he continues to teach at the Wharton School and the Law School. His books include Making Cities Work (Princeton). Daniel L. Rubinfeld is professor of law at New York University and the Robert L. Bridges Professor Emeritus of Law and professor emeritus of economics at the University of California, Berkeley. He is the coauthor of Microeconomics and Econometric Models and Economic Forecasts.