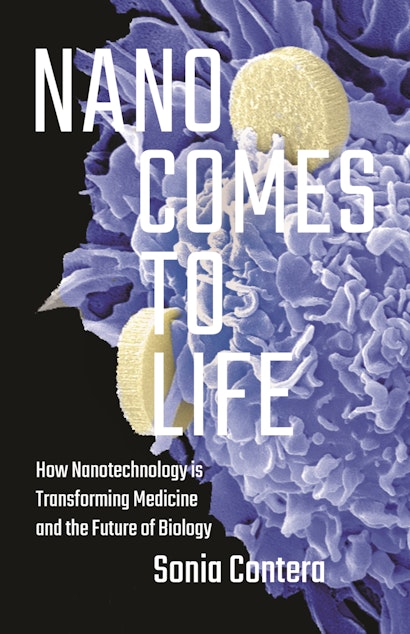 Nano Comes to Life
Available in 3 editions
Buy This

Nano Comes to Life opens a window onto the nanoscale—the infinitesimal realm of proteins and DNA where physics and cellular and molecular biology meet—and introduces readers to the rapidly evolving nanotechnologies that are allowing us to manipulate the very building blocks of life. Sonia Contera gives an insider’s perspective on this new frontier, revealing how nanotechnology enables a new kind of multidisciplinary science that is poised to give us control over our own biology, our health, and our lives

What is the significance of the title of the book? What is the relationship between biology and nanotechnology?

SC: Nanotechnology—the capacity to visualize, manipulate, and interact with matter at the nanometer scale—has been engaged with and inspired by biology from its inception in the 1980s. This is primarily because the molecular players in biology, and the main drug and treatment targets in medicine—proteins and DNA—are nanosize. Since the early days of the field, a main mission of nanotechnologists has been to create tools that allow us to interact with key biological molecules one at a time, directly in their natural medium. They strive to understand and even mimic in their artificial nanostructures the mechanisms that underpin the function of biological nanomachines (proteins). In the last thirty years nanomicroscopies (primarily, the atomic force microscope) have unveiled the complex dynamic nature of proteins and the vast numbers of tasks that they perform. Far from being the static shapes featured in traditional biochemistry books, proteins rotate to work as nanomotors; they  literally perform walks to transport cargo around the cell. This enables an understanding of molecular biology that departs quite radically from traditional biochemical methods developed in the last fifty years. Since the main tools of nanotechnology were born in physics labs, the scientists who use them to study biomolecules interrogate those molecules within the framework of physics. Everyone should have the experience of viewing atomic force microscopy movies of proteins in action. It really changes the way we think about ourselves, as I try to convey in my book.

And how does physics change the study of biology at the nanoscale?

SC: In its widest sense the physics of life seeks to understand how the rules that govern the whole universe  led to the emergence of life on Earth and underlie biological behaviour. Central to this study are the molecules (proteins, DNA, etc.  that underpin biological processes. Nanotechnology enables the investigation of the most basic mechanisms of their functions, their engineering principles, and ultimately mathematical models that describe them. Life on Earth probably evolved from nanosize molecules that became complex enough to enable replication, and evolution on Earth over billions of years has created the incredibly sophisticated nanomachines  whose complex interactions constitute the fabric of the actions, perceptions, and senses of all living creatures. Combining the tools of nanotech with physics to study the mechanisms of biology is also inspiring the development of new materials, electronic devices, and applications in engineering and medicine.

In other words, nanotechnology is central to the current convergence of the sciences in biology, which is one of the topics covered in Nano Comes to Life…

SC: Exactly, during the last thirty years the convergence of nanotechnology and molecular biology has facilitated the emergence of a fruitful interplay among biology, material sciences, physics, mathematics, and engineering that often takes place in the context of medical applications.

Are there any technologies that have developed at the interface of nanotechnology and biology?

SC: The interface of nanotechnology and biological sciences is already leading to a transformation of the way human-made materials are constructed and the uses to which they can be put. Scientists are creating nanostructures inspired by biology, and learning how to integrate these nanostructures into strategies aimed at solving specific medical problems and clearing technological roadblocks. New disciplines are emerging that seek to build artificial nanostructures using both biological molecules and the organizational principles of biology. This activity began with DNA nanotechnology, which is maturing as a distinct field of research. DNA nanotechnology pursues the design and construction of any arbitrary shape with atomic precision, using artificial DNA building blocks. More importantly, DNA nanotech seeks to give its structures nanoscale functionality for complex tasks, such as serving as an active template for the synthesis of molecules, or even working as a programmable molecular computer or a DNA robot able to deliver drug payloads to tumors.

In parallel, the field of protein nanotechnology attempts to achieve the same goals using natural or artificial proteins; this is a tougher task than making nanostructures with DNA, but it can lead to many more applications. One of the most striking examples of the integration of sciences in biology has been the arrival of “designer proteins.” Recently scientists have been able to hack the molecular machinery of the cell to create “post-evolutionary” proteins that do not exist in nature but have been designed in powerful computer programs. These technologies have made possible the realization of one of the dreams of the nanotechnology pioneers: the deployment of molecular assemblers able to construct any shape with atomic precision following a rational design, a plan previously rehearsed on a computer.

How is medicine expected to benefit from nanotechnology?

SC: A fundamental drive of DNA and protein nanotechnologies is to create dynamic tools for nanomedical applications, ranging from molecular DNA assemblers of medicinal drugs to improved vaccines, and powerful antiviral and antibacterial nanomedicines. These and other nanotechnologies are being used to improve the efficiency of current cancer chemotherapies by developing drug-delivery strategies that specifically target tumors and cancer cells. Although drug delivery via nanostructures was one of the initial goals of nanomedicine that attracted the most support, the effort put into it has not led to the breakthroughs that were hoped for. This is due partly to inertia: the application of existing trial-and-error methods to complex biological processes that are still poorly understood; the insufficient coordination of existing research. And it is due partly to impatience: seeking nano-powered magic bullets and lucky shortcuts to cure disease—approaches that overlook the complexity of the biology involved—has not proven fruitful. Fortunately, the lessons are being learned, and new, improved initiatives are already gathering momentum. Nanotechnology and its offshoots are also improving their ability to create nanodevices that sense the chemicals in the body, thereby making strides toward the goal of responding to chemical imbalances in real time by releasing drugs when and where they are needed, but we have not yet attained that goal.

Perhaps one of the most fascinating contributions that nanotechnology can make to health and medicine is to team up with the biological research currently being done on immunotherapies (a type of cancer treatment that boosts the body’s immune system to fight cancer). These combined efforts have the potential to accelerate the science of controlling and improving our immune system’s innate capacity to detect and fight disease from within. As I discuss in the book, the combined advances in the biology of immunotherapy, nanomedical devices, and mathematical/physical modeling are likely to lead to a super-enhanced human immune system in the future.

Artificial nanostructured materials inspired by biology are also being used to create new scaffolds for regenerating tissues and organs. The final objective is to replace malfunctioning organs in the body, but in the shorter term they are expected to be useful for explaining the basic building strategies of biology. In the midterm, they are likely to be used in drug testing, thereby making animal testing unnecessary.

SC: The method of interrogating biology that I describe in Nano Comes to Life leads to an inexorable blurring of the distinction between biological and material sciences: a new transmaterial science is in its embryonic state. With increasing control of matter at the nanometer scale and better knowledge of the building tricks and machinery of biology, artificial materials inspired by biology will be used to create new scaffolds for regenerating tissues and organs, or to improve the responses of the immune system. In parallel, hybrid bio-inorganic devices that mimic biology will be used in new computers and electronic devices. By increasingly refining our ability to learn biology using the methods of physics, we will in fact be distilling the recipes of the universe to fabricate and assemble matter from the nanometer scale up, and will ultimately acquire the power to revolutionize human technology and medicine.

What consequences will this have for the future of biology?

SC: The incorporation of biology (including intelligence) into the realm of physics facilitates a profound and potentially groundbreaking cultural shift, because it places the study of life within the widest possible context: the study of the rules that govern the cosmos. Nano Comes to Life seeks to reveal this new context for studying life and the potential for human advancement that it enables. The most powerful message of this book is that in the twenty-first century life can no longer be considered just the biochemical product of an algorithm written in genes (one that can potentially be modified at someone’s convenience); it must be understood as a complex and magnificent (and meaningful) realization of the laws that created the universe itself. The biochemical/genetic paradigm that dominated most of the twentieth century has been useful for understanding many biological processes, but it is insufficient to explain life in all its complexity, and to unblock existing medical bottlenecks. More broadly, as physics, engineering, computer science, and materials science merge with biology, they are actually helping to reconnect science and technology with the deep questions that humans have asked themselves from the beginning of civilization: What is life? What does it mean to be human when we can manipulate and even exploit our own biology? We have reached a point in history where these questions naturally arise from the practice of science, and this necessarily changes the sciences’ relationship with society.

We are entering a historic period of scientific convergence, feeling an urge to turn our heads to the past even as we walk toward the future, seeking to find, in the origin of the ideas that brought us here, the inspiration that will allow us to move forward. Nano Comes to Life focuses on the science but attempts to call attention to the potential for a new intellectual framework to emerge at the convergence of the sciences, one that scientists, engineers, artists, and thinkers should tap to create narratives and visions of the future that midwife our coming of age as a technological species. This might be the most important role of the physics of life that emerges from our labs: to contribute to the collective construction of a path to the preservation of human life on Earth.

Sonia Contera is professor of biological physics in the Department of Physics at the University of Oxford and one of today’s leading nanotech pioneers. She lives in Oxford, England. Twitter @SONIACONTERA