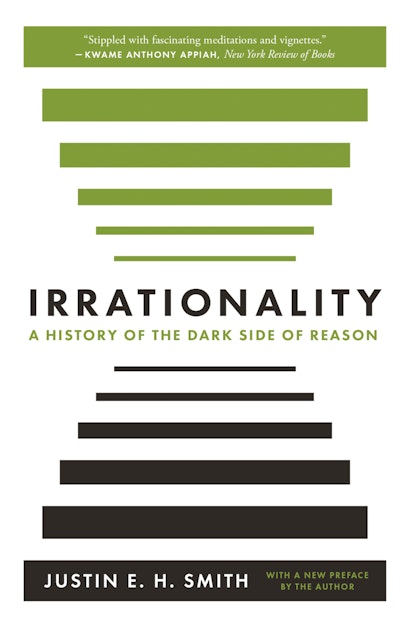 Irrationality
Available in 2 editions
Buy This

Irrationality was published in 2019, but the real subject of the book, it turns out, is the year 2020. As I explain in the preface to the paperback edition, which I wrote under quarantine in New York while ill with the coronavirus in April, the book now seems to me to be describing a world that had been gestating for some years, but that only came out kicking and screaming, loud enough for all to hear and for none to deny, in the pandemic era, which coincides, significantly, with the final year of Donald Trump’s ignominious presidency.

Let me provide an illustration. On November 10, Secretary of State Mike Pompeo announced at a press conference that he was indeed expecting a “smooth transition”…to a second Trump administration. Pompeo was smirking as he said this, and from that smirk, I believe, a fairly comprehensive analysis of the present historical moment may be unraveled.

On the face of it what we are witnessing here is a classic instance of “bullshit” in Harry Frankfurt’s technical sense. Bullshit, for the philosopher, is not just any deceitful blowing of hot air. It is, precisely, when the speaker is speaking untruthfully, and knows that the listener knows he is speaking untruthfully, and likely knows that the listener knows he knows, but forges ahead anyway. The point of bullshitting is not to conceal the truth from the listener. As Frankfurt explains, the bullshitter is indifferent to the truth, and bullshits free from any pang of a shirked duty to tell the truth. The liar is transgressing an acknowledged duty; the bullshitter is speaking in the absence of any such acknowledgment. Bullshit is thus, Frankfurt maintains, “a greater enemy of the truth than lies are.”

None of this analysis is irrelevant, exactly, to our effort to understand the sloppy and lackluster but nonetheless very worrisome coup d’état that the Republicans appear to be attempting. When Mitch McConnell pretends that the recent election may have been so fraught with “irregularities” as to invalidate its results, he almost certainly knows you know he knows he is being untruthful, but just keeps plodding ahead, truth be damned.

Yet there may be something more complex going on than just bullshit, and it may be time to revise Frankfurt’s analysis to better fit our peculiar era of ubiquitous disinformation.

Pompeo’s smirk descends, among other reptilian ancestors, from the style of expression that evolved in extremist internet subcultures over the past decade. Long ago, in Spring, 2016, Allum Bokhari and Milo Yiannopoulos published in Breitbart a remarkable document entitled “An Establishment Conservative’s Guide to the Alt-Right.” Among other noteworthy claims, the authors insist that while the new, young, online right often appears bigoted, one should no more take their claims at face value than one should suppose that “death metal devotees in the 80s were actually Satanists.” To express concern about the sudden explosion of ebullient memes using swastikas, photographs from concentration camps, and other deeply charged and tabooed images was to risk coming across as being just as square as the “concerned parents” a generation prior who sought to raise awareness of secret backwards messages on Black Sabbath albums.

Part of what made the denial plausible was that the memes were not composed of swastikas alone, but of swastikas juxtaposed with rainbow-colored unicorns, and other such jolting blendings of symbolic registers that often left outsiders more perplexed than offended. Andrew Anglin, the creator of the neo-Nazi website, The Daily Stormer, admitted to taking his cue, rhetorically speaking, from the “snark” of pioneering web publications like Gawker. Another neo-Nazi, Mike Peinovich, host of a podcast called The Daily Shoah, acknowledged deriving inspiration from the light and playful nihilism of Seinfeld.

The alt-right circa 2016, in short, was so successful in part because it was, for those involved in it, fun. It successfully tapped into the same energy that made popular cultural in general fun, and channeled this energy in dark directions while also falling back on the alibi of harmless jocularity when accused of being hateful, pointing to the obvious markers of shared ancestry that it had with so much else in our culture.

President Trump was the most successful and enduring product of the memetic frenzy of that era. He is the meme that not only jumped the fence separating the virtual from the real, but managed to get installed in the most powerful position in the world. Trump is old, and yet somehow his idiosyncrasies harmonized perfectly with the new style of humor emerging online in the 2010s. With regard to syntax and punctuation, there is an uncanny convergence between the tweets of the president and those of the mysterious Twitter user known only as “dril.” Trump is, like it or not, funny. His success depends in part on our getting the joke, where the joke is not any particular one-liner (what makes him funny is certainly not anything like a quick wit), but rather the whole package of his person.

This is, of course, bad for politics. The normal functioning of government requires an exaggerated solemnity about even small things, like the strained conversation an outgoing president has with an incoming one, for the sake of a “smooth transfer of power.” Under a normal regime, a politician’s statements will be unambiguous truth claims: even if they are false, even if they are villainous lies, we will understand how their speaker wishes for us to take them, and that is at least some small comfort when being lied to.

But the inelegant swan song of this vanquished regime is one that echoes its first cries four years ago. Now as then, we are not only being lied to, but lied to by people who use untruth for transgressive ends, to convey their disdain for truth as an ideal. Nor are they just bullshitting. They are, rather, depriving us even of the satisfaction of seeing them act in full, bold acknowledgment of their transgression—against the popular will, against democracy—and instead are still trying to pass it all off as a joke.