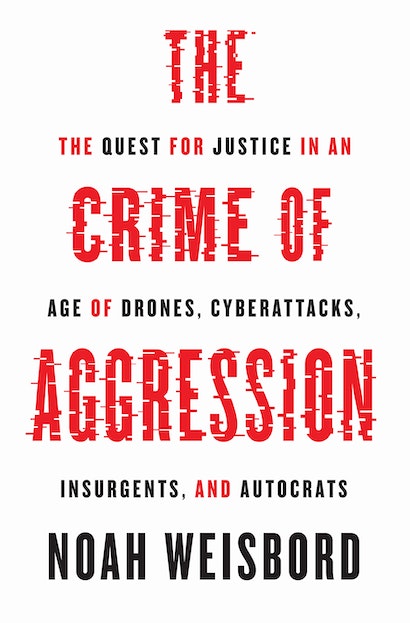 The Crime of Aggression
Available in 2 editions
Buy This

Law is neither dead nor irrelevant in wartime. It permeates the bureaucratic, legalistic structure of the modern war machine. All world leaders, including Vladimir Putin, acknowledge the post–World War II legal basis for waging war. What differ among leaders are their strategies in contending with the law, which is as distinct and demanding a battlefield as are desert, jungle, or urban terrains. Leaders, powerful or not, must negotiate the legal terrain in order to wage war, including persuading the population of the justice of the war, persuading allies, persuading domestic and international courts, purchasing weapons, negotiating leases on foreign bases. Law is not simply an effective formal constraint on power. It can slow leaders or assist their military goals. Leaders’ strategies range from attacking the law, vacuously interpreting the law to justify force, or ignoring the law entirely unless stopped. This choice of strategies can be seen in reference to the legal justifications of Vladimir Putin at the commencement of the Russian invasion of Ukraine in 2014.

The essay below is excerpted and lightly edited from Chapter 2 of  The Crime of Aggression: The Quest for Justice in an Age of Drones, Cyberattacks, Insurgents, and Autocrats by Noah Weisbord

Crimeans awoke one morning and were unnerved to discover hundreds of little green men in their midst. Still basking in the magic of the televised closing ceremony of the 2014 Olympic games in Sochi, Russia’s thrilling tribute to its circus heritage occupied their dreams. Now the circus had come to town. Little green men were everywhere—milling around airports, roadblocks, and government buildings, donning balaclavas and military fatigues. Clearly, they were human, not Martian. But without any identifying badges or insignia to speak of, the particular variety of human and the legal character of the operation remained up for debate.

Russian President Vladimir Putin called a press conference, insisting Russian troops were not meddling in a sovereign state: the heavily armed, tightly coordinated groups who took over Crimea’s airports and ports at the start of the incursion were merely spontaneous “self-defence groups” who may have acquired their Russian-looking uniforms from local shops.[1] Russian Minister of Defense Sergey Shoygu added, “Regarding the statements about use of Russian special forces in Ukrainian events, I can only say one thing—it’s hard to search for a black cat in a dark room, especially if it’s not there.” He warned that it would be “stupid” to search for the cat if it is “intelligent, brave, and polite.”[2] Polish Minister of Foreign Affairs Radek Sikorski asked Putin for the address of a shop in Ukraine or Russia where people can purchase Strela surface-to-air missile systems and T-64 tanks.[3]

The crisis in the Crimea caused a flurry of argumentation that proved that international law was still twitching. It was, in fact, influencing the war machine by reconfiguring the attention of world leaders. Putin presented a panoply of legal arguments with historical analogies intended to support his strategy. He knew that to legitimize political violence and make it of lasting historical significance, it had to be ratified by law.

On March 18, 2014, Putin delivered a speech to the Russian State Duma (the lower house) where he asked lawmakers to add two new entities to the Russian Federation, the Republic of Crimea and the City of Sevastopol.[4] In this call for annexation, punctuated by standing ovations, Putin revealed his version of Crimean history. It was an intoxicating fog of shared Russo-Crimean victory and humiliation that began with his namesake, Prince Vladimir, being driven out of Russia by his fratricidal brother in 976, and continued through a litany of Crimean landmarks where historic Russian battles were won and lost over a thousand years. The purpose of Putin’s historical exegesis was to make a political point with more emotional resonance than logical consistency: “In people’s hearts and minds,” he reasoned, “Crimea has always been an inseparable part of Russia.”[5]

As a result of its history, Putin proudly explained, “Crimea is a unique blend of different peoples’ cultures and traditions. This makes it similar to Russia as a whole, where not a single ethnic group has been lost over the centuries.”[6] Putin envisaged Russia as a tolerant, multiethnic state, in contrast to the fascist “Banderists” next door who had usurped the government in Kiev and were stripping Ukrainian minorities, including those of Russian ancestry, of their rights. Throughout the speech, Putin glossed over Russia’s sordid history of persecution of ethnic minorities, most conspicuously Stalin’s genocides, and trivialized Russia’s mistreatment of the Crimean Tatars, approximately two hundred thousand of whom Russia forcibly deported to Central Asia in boxcars during World War II.[7] “True, there was a time when Crimean Tatars were treated unfairly, just as a number of other peoples in the USSR. There is only one thing I can say here: millions of people of various ethnicities suffered during those repressions, and primarily Russians.”[8]

In Putin’s account, the 1954 transfer of Crimea and Sevastopol from Russia to the Ukraine was a massive blunder, equal parts tragedy and farce. While Nikita Khrushchev’s decision was bizarre, it was ultimately a formality since the Crimea and Sevastopol were transferred within the USSR, a single state. But with the collapse of the Soviet Union in 1990, the “impossible became a reality. … It was only when Crimea ended up as part of a different country that Russia realised that it was not simply robbed, it was plundered.” Crimeans, Putin lamented, felt as if they had been handed over like “a sack of potatoes.”[9]

Compounding this “outrageous historical injustice,” the Ukrainian authorities milked the country, fought amongst themselves for power, and attempted to deprive Ukrainian Russians of their language and history. When “Nationalists, neo-Nazis, Russophobes and anti-Semites executed this coup [in 2014 Kiev],” Crimeans called on Russia for help. “Naturally,” Putin told the Duma, “we could not leave this plea unheeded; we could not abandon Crimea and its residents in distress.”[10]

Putin’s historical account corresponded neatly with his legal rationale for the annexation of the Crimea. With the United States, the United Kingdom, and France certain to block any UN Security Council resolution authorizing Russia to use force to restore peace and security in the Crimea, and without an armed attack by Ukraine against Russia to justify self-defense, Putin’s legal options were dismal. He was left with four conceivable arguments: intervention by invitation, the defense of Russian nationals, humanitarian intervention, and intervention to help vindicate Crimeans’ right to self-determination.[11] Putin threw them all against the wall like undercooked spaghetti, hoping something would stick.

Putin’s arguments interpreted the law chauvinistically, but because he relied on common legal rules and precedents, the by-product was a buttressing of the authority of law. Now, what was needed was an independent institution and an authoritative legal process to evaluate his claims.

The ICC seemed the logical impartial institution—it had a proven track record of independent adjudication of politically charged cases against political and military leaders. The danger, however, was that any ICC attempt to discipline the leader of a great power such as Russia might cause the court’s collapse. There were two obvious ways this could happen. ICC prosecutor Fatou Bensouda or her successor would initiate a case against a powerful leader, but the ICC’s member states would be too intimidated to make the arrest, revealing impotence and snuffing out the court’s authority. Alternatively, Bensouda or judges aware of their enforcement limits might invoke technical legal reasons not to arrest or prosecute. This would expose the ICC to accusations of bias, undermining its legitimacy.

For over a year, Putin denied Russian involvement. The deed was done, but with no effective international arbiter, legal posturing exacerbated the fog of war. A clear, widely accepted definition of the crime of aggression, interpreted by an impartial, objective, and transparent judicial institution was a potential antidote.