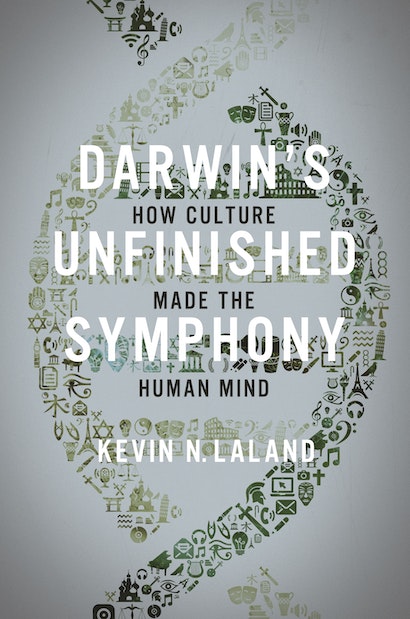 Buy This
Humans possess an extraordinary capacity for culture, from the arts and language to science and technology. But how did the human mind—and the uniquely human ability to devise and transmit culture—evolve from its roots in animal behavior? Darwin’s Unfinished Symphony presents a captivating new theory of human cognitive evolution. This compelling and accessible book reveals how culture is not just the magnificent end product of an evolutionary process that produced a species unlike all others—it is also the key driving force behind that process. Kevin Laland tells the story of the painstaking fieldwork, the key experiments, the false leads, and the stunning scientific breakthroughs that led to this new understanding of how culture transformed human evolution. It is the story of how Darwin’s intellectual descendants picked up where he left off and took up the challenge of providing a scientific account of the evolution of the human mind.

Kevin N. Laland is professor of behavioral and evolutionary biology at the University of St Andrews.

"Not only philosophers and other human scientists interested . . . in cognitive and epistemological issues, but also educators and researchers in educational sciences can greatly benefit from reading this excellent book."—Lorenzo Magnani, Science and Education

"Truly impressive."—Louise Barrett, author of Beyond the Brain: How Body and Environment Shape Animal and Human Minds

"Darwin would be proud."—Nicola Clayton, University of Cambridge and Scientist in Residence at Rambert, UK

"Darwin’s Unfinished Symphony makes a compelling case that elegantly seats humans within the natural world, while at the same time explaining our peculiar uniqueness."—Joseph Henrich, Science

"Under [Kevin] Laland’s sophisticated interpretation, cultural innovations did not merely respond to environmental challenges but also helped create the elaborate surroundings within which natural selection made us what we are today."—David Barash, Wall Street Journal

"[A]n enjoyable and valuable place to begin or to top up your understanding of our enigmatic existence."—Mark Pagel, New Scientist