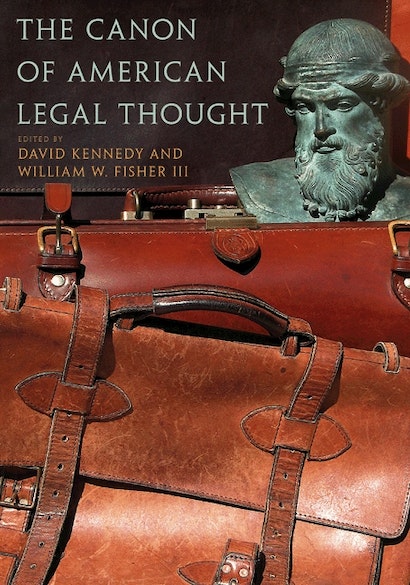 This anthology presents, for the first time, full texts of the twenty most important works of American legal thought since 1890. Drawing on a course the editors teach at Harvard Law School, the book traces the rise and evolution of a distinctly American form of legal reasoning. These are the articles that have made these authors — from Oliver Wendell Holmes, Jr., to Ronald Coase, from Ronald Dworkin to Catherine MacKinnon — among the most recognized names in American legal history.


These authors proposed answers to the classic question: “What does it mean to think like a lawyer — an American lawyer?” Their answers differed, but taken together they form a powerful brief for the existence of a distinct and powerful style of reasoning — and of rulership. The legal mind is as often critical as constructive, however, and these texts form a canon of critical thinking, a toolbox for resisting and unravelling the arguments of the best legal minds. Each article is preceded by a short introduction highlighting the article’s main ideas and situating it in the context of its author’s broader intellectual projects, the scholarly debates of his or her time, and the reception the article received.


Law students and their teachers will benefit from seeing these classic writings, in full, in the context of their original development. For lawyers, the collection will take them back to their best days in law school. All readers will be struck by the richness, the subtlety, and the sophistication with which so many of what have become the clichés of everyday legal argument were originally formulated.

David Kennedy is Manley O. Hudson Professor of Law and Director of the European Law Research Center at Harvard Law School. His books include The Dark Sides of Virtue and Of War and Law(forthcoming) (both Princeton). William W. Fisher III is Hale and Dorr Professor of Intellectual Property Law and Director of the Berkman Center for Internet & Society at Harvard Law School. His most recent book is Promises to Keep: Technology, Law, and the Future of Entertainment.

"The editors provide an introduction to each article, making the sophisticated scholarship more accessible and highlighting connections among articles whose subjects range from contracts to republican theory. While not everyone will agree with the editors' selections, Professors David Kennedy and William Fisher have undeniably performed a valuable service to scholars and students and have provided an important baseline for understanding legal thought."—Harvard Law Review

"[This book] is invaluable evidence that the study of law and the distinctive arguments and claims characteristic to legal practice and academia, are worthy of study as an autonomous discipline. In an age where the legal academy is increasingly moving toward a 'law and —' model of scholarship, this weighty reminder that the law warrants its own study could not be more timely."—Aziz Huq, New York Law Journal

"[W]hile this specialized and sophisticated compendium is not light summer reading, it is for the interested scholar with some legal background who wants a survey of contemporary American legal thought and the grounding to take that interest further."—George Conyne, American Studies

"There is much in this compilation to admire, and it would actually make sense to make every American law professor . . . read and ponder these pieces."—Stephen B. Presser, The American Lawyer