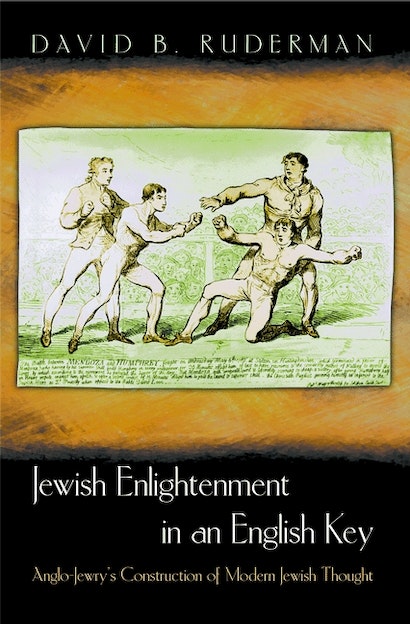 Historians of the European Jewish experience have long marginalized the intellectual achievement of Jews in England, where it was assumed no seminal figures contributed to the development of modern Jewish thought. In this first comprehensive account of the emergence of Anglo-Jewish thought in the eighteenth and nineteenth centuries, David Ruderman impels a reconsideration of the formative beginnings of modern European Jewish culture. He uncovers a vibrant Jewish intellectual life in England during the Enlightenment era by examining a small but fascinating group of hitherto neglected Jewish thinkers in the process of transforming their traditional Hebraic culture into a modern English one. This lively portrait of English Jews reformulating their tradition in light of Enlightenment categories illuminates an overlooked corner in the history of Jewish culture in England and Jewish thought during the Enlightenment.


Ruderman overturns the conventional view that the origins of modern Jewish consciousness are located exclusively within the German-Jewish experience, particularly Moses Mendelssohn’s circle. Independent of the better-known German experience, the encounter between Jewish and English thought was incubated amid the unprecedented freedom enjoyed by Jews in England. This resulted in a less inhibited defense of Jews and Judaism. In addition to the original and prolific thinkers David Levi and Abraham Tang, Ruderman introduces Abraham and Joshua Van Oven, Mordechai Shnaber Levison, Samuel Falk, Isaac Delgado, Solomon Bennett, Hyman Hurwitz, Emanuel Mendes da Costa, Ralph Shomberg, and others. Of obvious appeal and import to students of Jewish and English history, this study depicts the challenge of defining a religious identity in the modern age.

David B. Ruderman is the Joseph Meyerhoff Professor of Modern Jewish History and Director of the Center for Advanced Judaic Studies at the University of Pennsylvania.