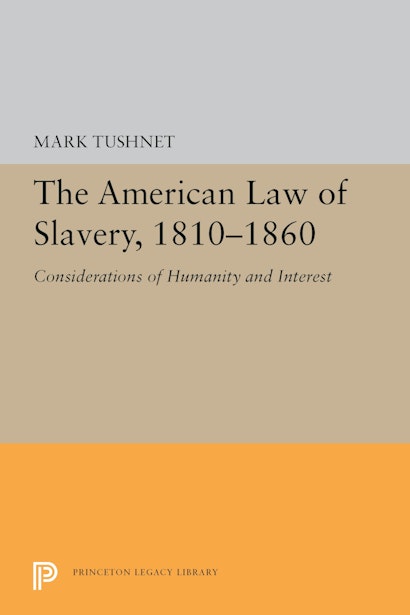 In an examination of Southern slave law between 1810 and 1860, Mark Tushnet reveals a structured dichotomy between slave labor systems and bourgeois systems of production. Whereas the former rest on the total dominion of the master over the slave and necessitate a concern for the slave’s humanity, the latter rest of the purchase by the capitalist of a worker’s labor power only and are concerned primarily with economic interest. Focusing on a wide range of issues that include contract and accident law as well as criminal law and the law of manumission, he shows how Southern slave law had to respond to the competing pressures of humanity and interest.
Beginning with a critical evaluation of slave law, the author develops the conceptual framework for his own perspective on the legal system, drawing on the works of Marx and Weber. He then examines four appellate court cases decided in three different states, from civil-law Louisiana to commonlaw North Carolina, at widely separated times, from 1818 to 1858.
Professor Tushnet finds that the cases display a continuing but never wholly successful attempt at distinguish between law and sentiment as modes of regulating social interactions involving slaves. Also, the cases show that the primary method of accommodating law and sentiment was an attempt to use rigid categories to confine the law of slavery to what was thought its proper sphere.
Mark Tushnet is Professor of Law at the University of Wisconsin.