A history of the Ottoman incorporation of Arab lands that shows how gentlemanly salons shaped culture, society, and governance 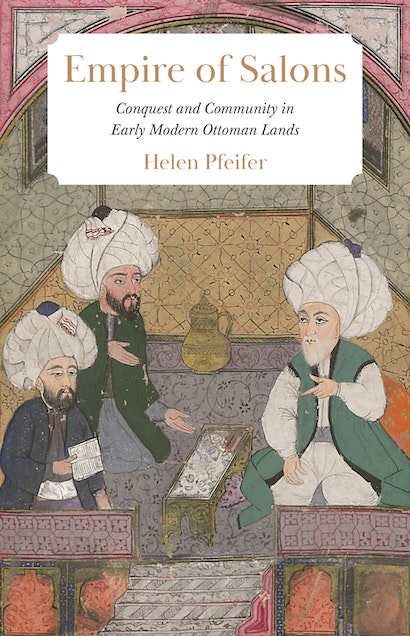 Historians have typically linked Ottoman imperial cohesion in the sixteenth century to the bureaucracy or the sultan’s court. In Empire of Salons, Helen Pfeifer points instead to a critical but overlooked factor: gentlemanly salons. Pfeifer demonstrates that salons—exclusive assemblies in which elite men displayed their knowledge and status—contributed as much as any formal institution to the empire’s political stability. These key laboratories of Ottoman culture, society, and politics helped men to build relationships and exchange ideas across the far-flung Ottoman lands. Pfeifer shows that salons played a central role in Syria and Egypt’s integration into the empire after the conquest of 1516–17.

Pfeifer anchors her narrative in the life and network of the star scholar of sixteenth-century Damascus, Badr al-Din al-Ghazzi (d. 1577), and she reveals that Arab elites were more influential within the empire than previously recognized. Their local knowledge and scholarly expertise competed with, and occasionally even outshone, that of the most powerful officials from Istanbul. Ultimately, Ottoman culture of the era was forged collaboratively, by Arab and Turkophone actors alike.

Drawing on a range of Arabic and Ottoman Turkish sources, Empire of Salons illustrates the extent to which magnificent gatherings of Ottoman gentlemen contributed to the culture and governance of empire.

Helen Pfeifer is the inaugural university lecturer in early Ottoman history at the University of Cambridge and a fellow of Christ’s College. Twitter @krel7

“Exploring literary salons across the early modern Middle East, Helen Pfeifer narrates a bold and unrivaled new history of the social, political, and intellectual consequences resulting from the largest territorial expansion during six centuries of Ottoman rule. Based on meticulous research, Empire of Salons offers a seamless melding of cultural and institutional history, one of empirical bravura and methodological revelation.”—Alan Mikhail, author of God’s Shadow

“Empire of Salons takes its place among new, innovative works of scholarship in Ottoman intellectual and social history. Drawing from an array of Arabic and Ottoman Turkish sources, Helen Pfeifer shows how gentlemanly salons among the civilian elite of the Ottoman Arab provinces in the sixteenth century served as critical sites for status affirmation and career building, as well as the circulation of intellectual currents and literary forms.”—Jane Hathaway, author of The Arab Lands under Ottoman Rule, 1516–1800

“This eloquently written book provides the first in-depth study of the impact of the Ottoman conquest of the Mamluk lands on the formation of Ottoman imperial culture. Helen Pfeifer shifts the conversation away from administrative processes to Ottoman salons and other informal settings as sites of imperial integration between Rumi and Arab cultural and intellectual outlooks. This is a timely and exciting contribution to early modern Ottoman and Islamic cultural history.”—Tijana Krstić, Central European University

“Examining the relationship between the Turkish-speaking Muslim scholars of Anatolia and the Arabic-speaking Muslim scholars of greater Syria, Helen Pfeifer’s careful study explores questions of the imperial domination of one Muslim elite over another in the Ottoman Empire. Inspired by the delicate rules of the salons where this relationship unfolded, Pfeifer approaches this complex issue in a nuanced fashion, producing a book that must be read by everyone interested in the early modern history of the Middle East.”—Baki Tezcan, University of California, Davis