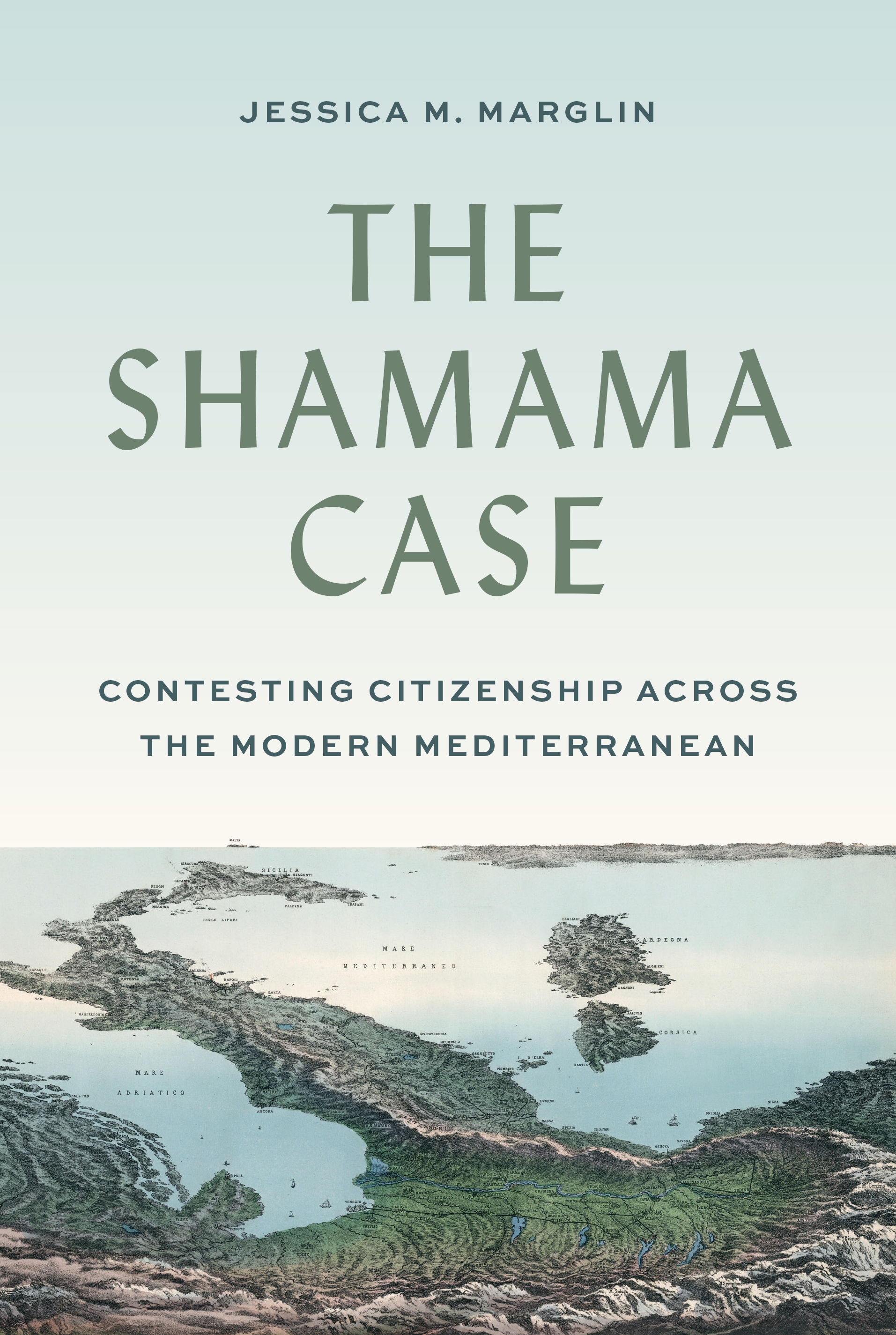 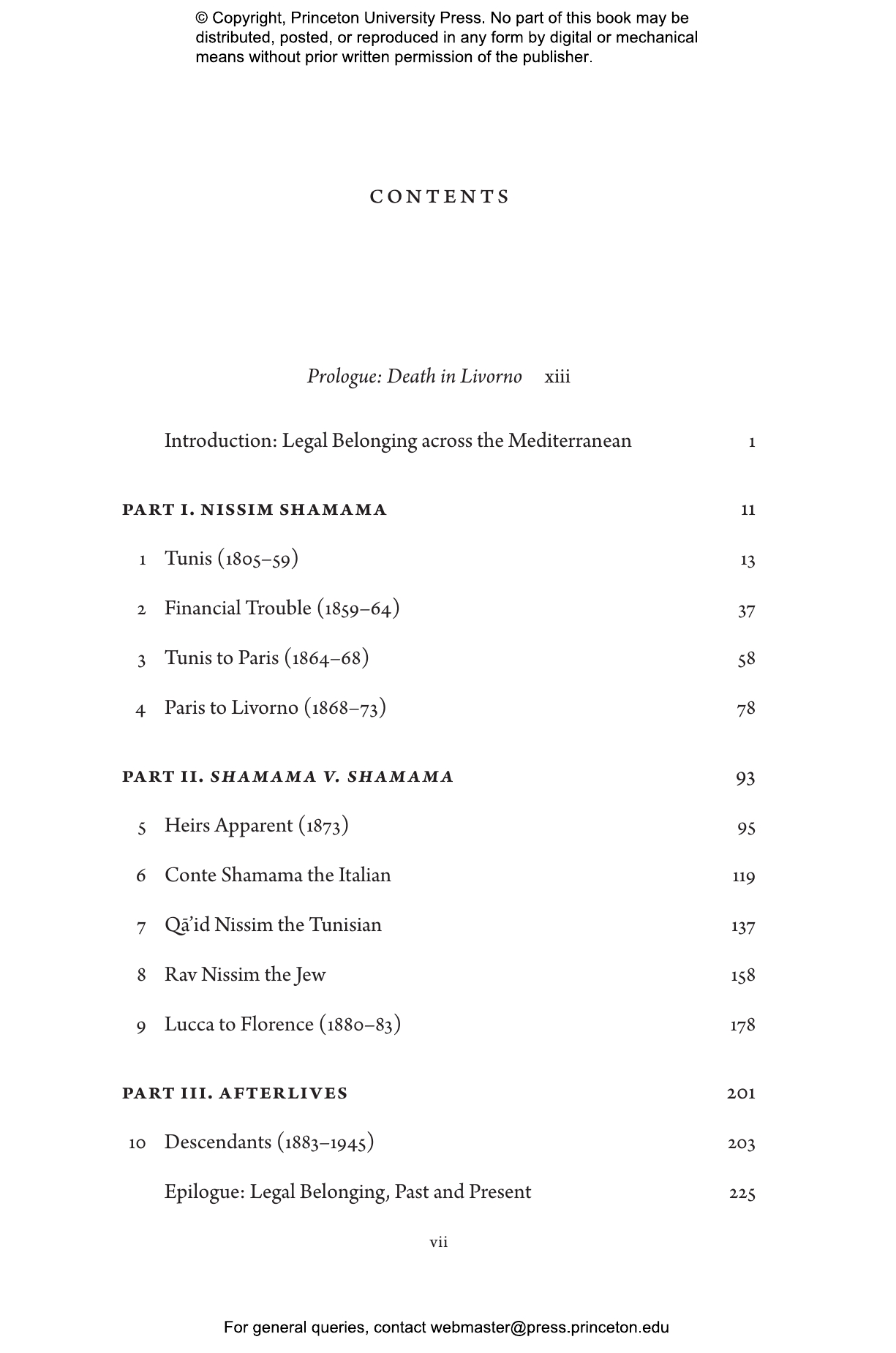 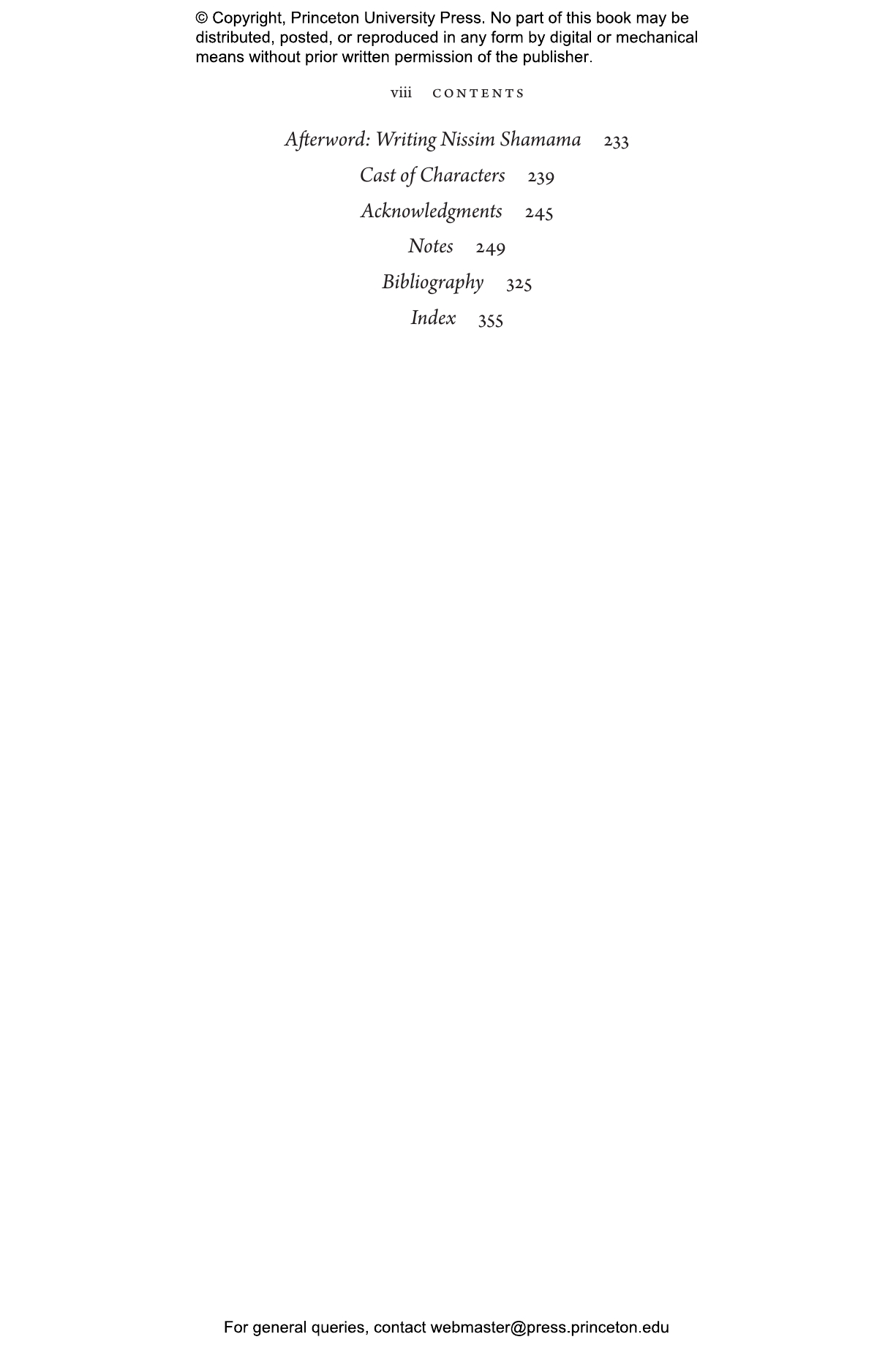 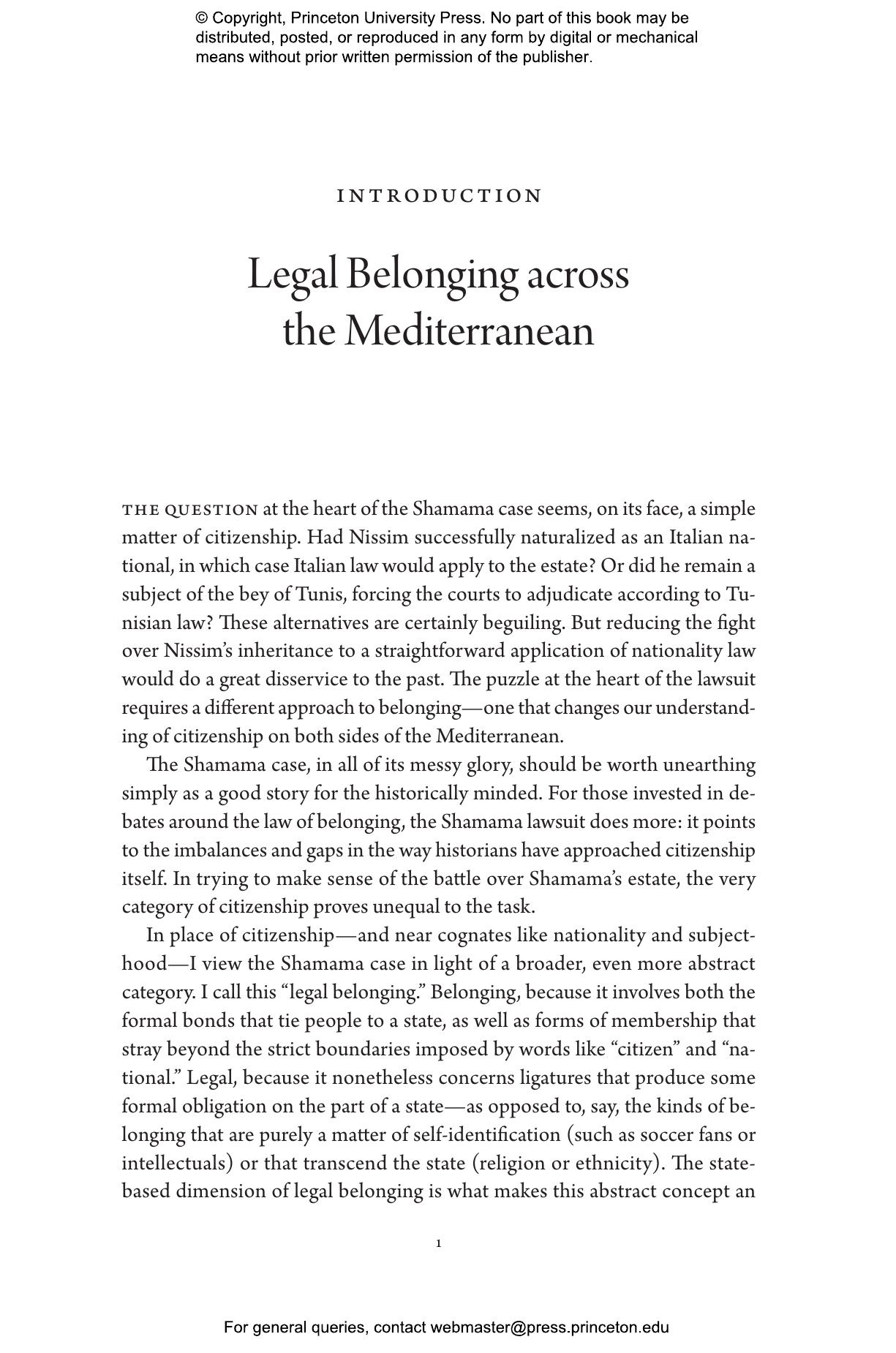 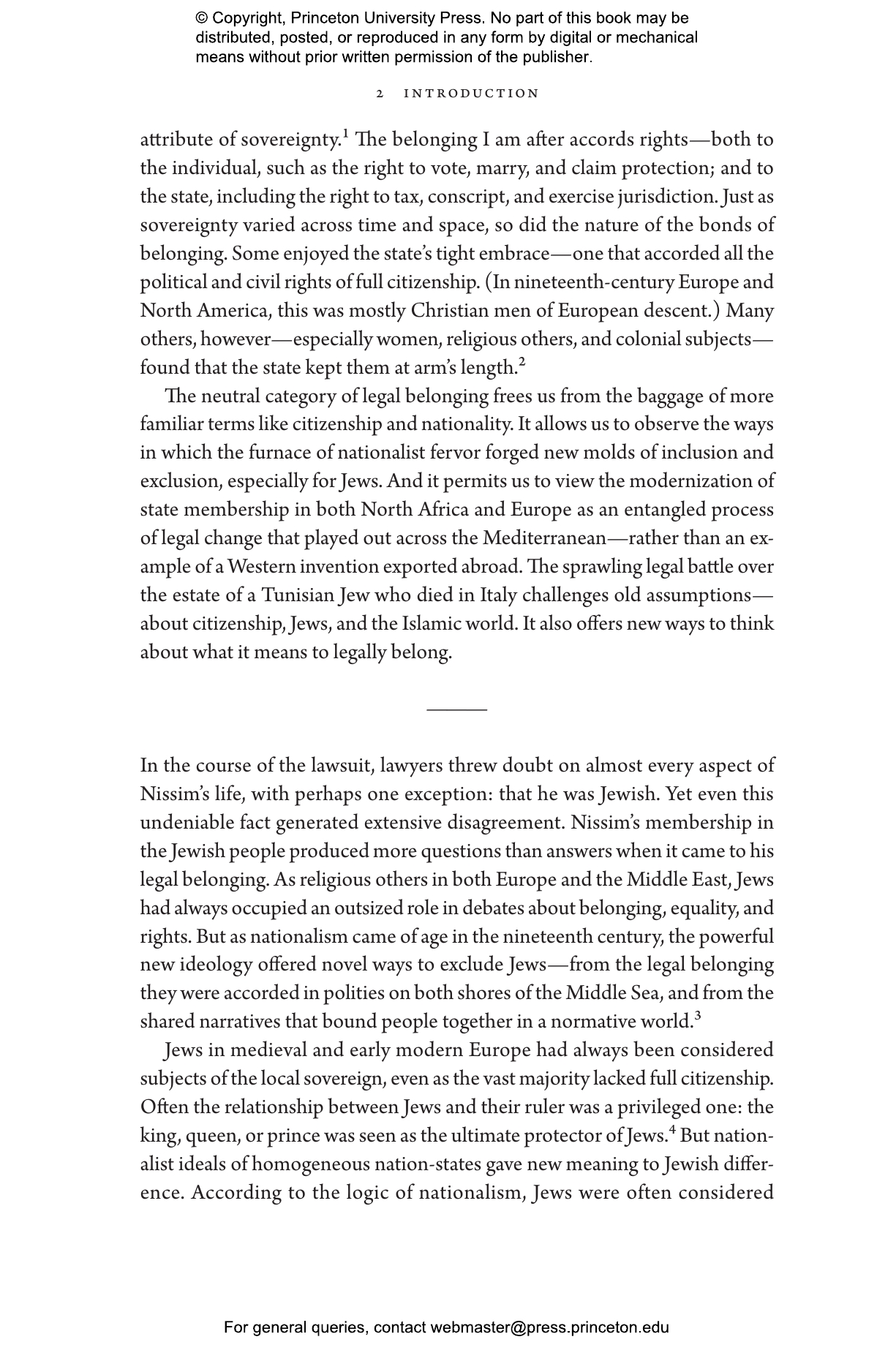 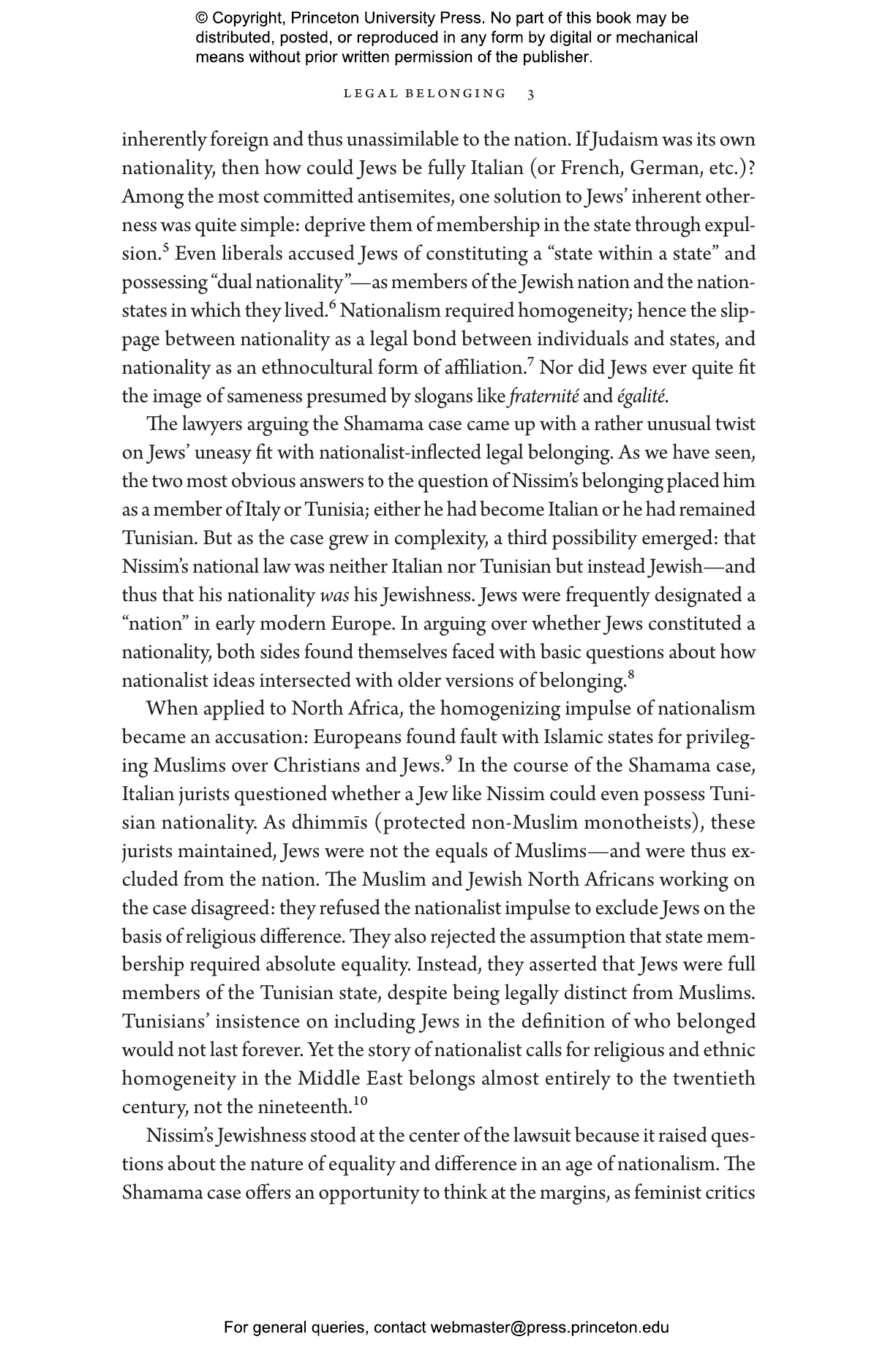 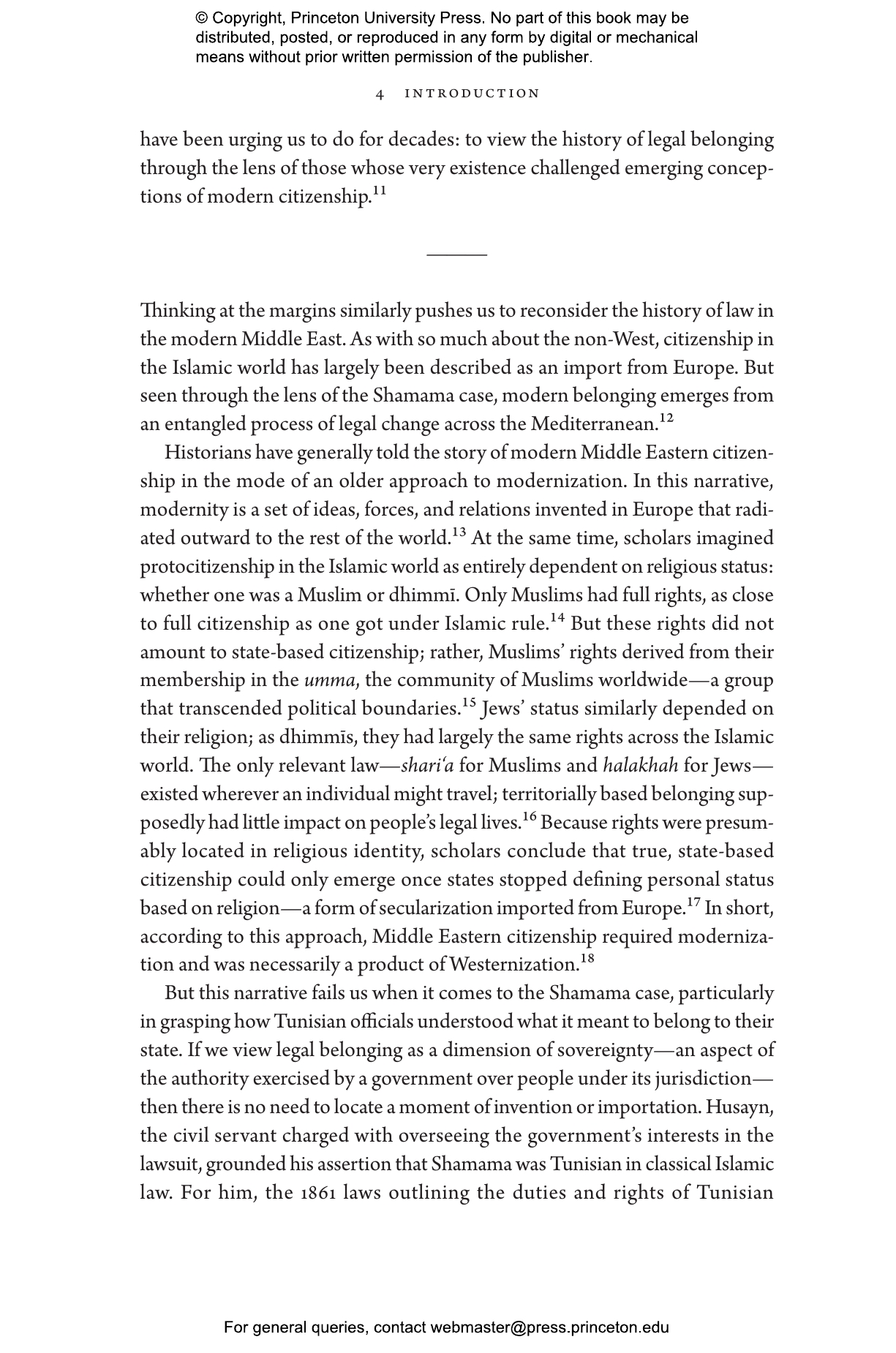 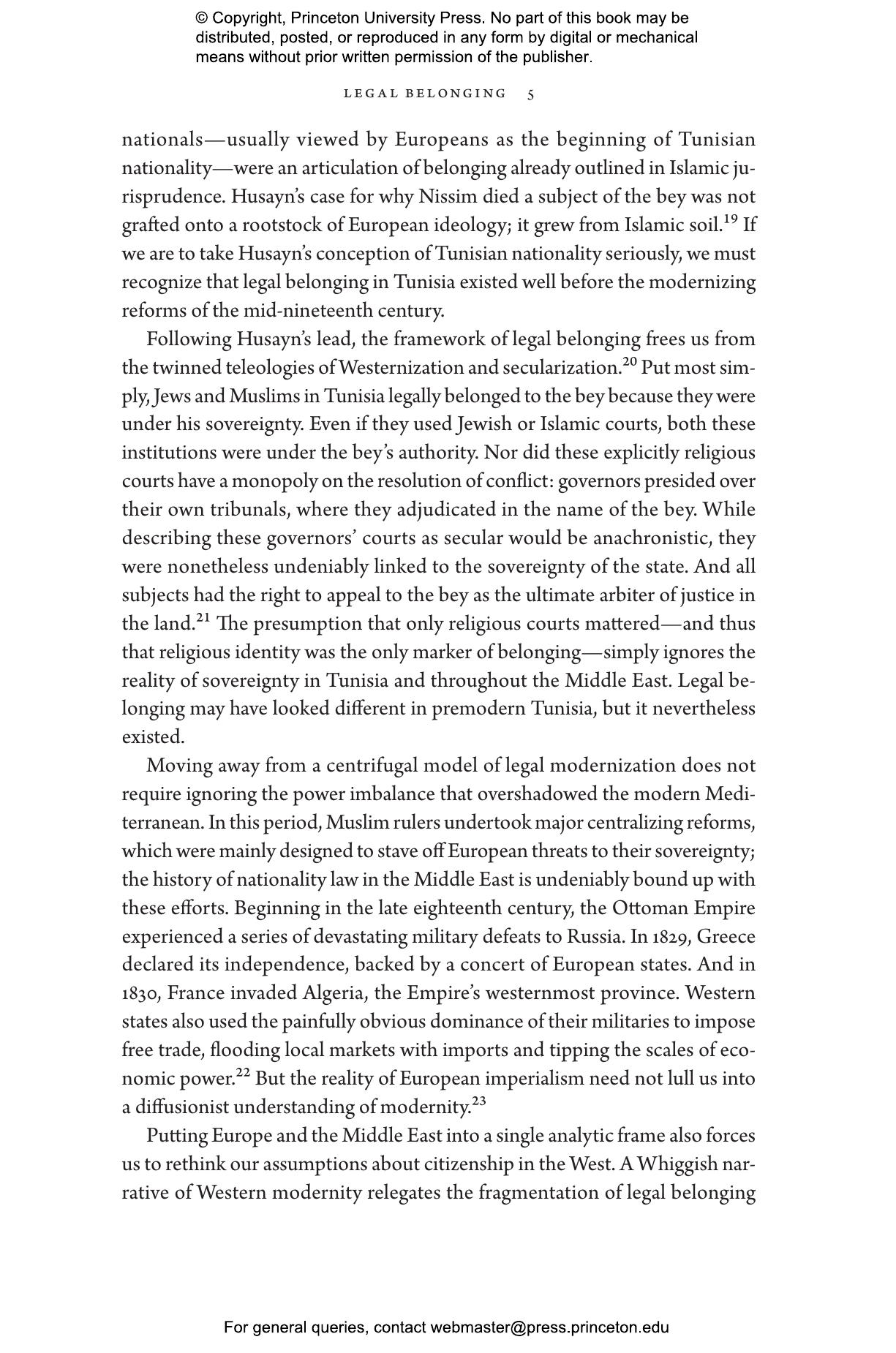 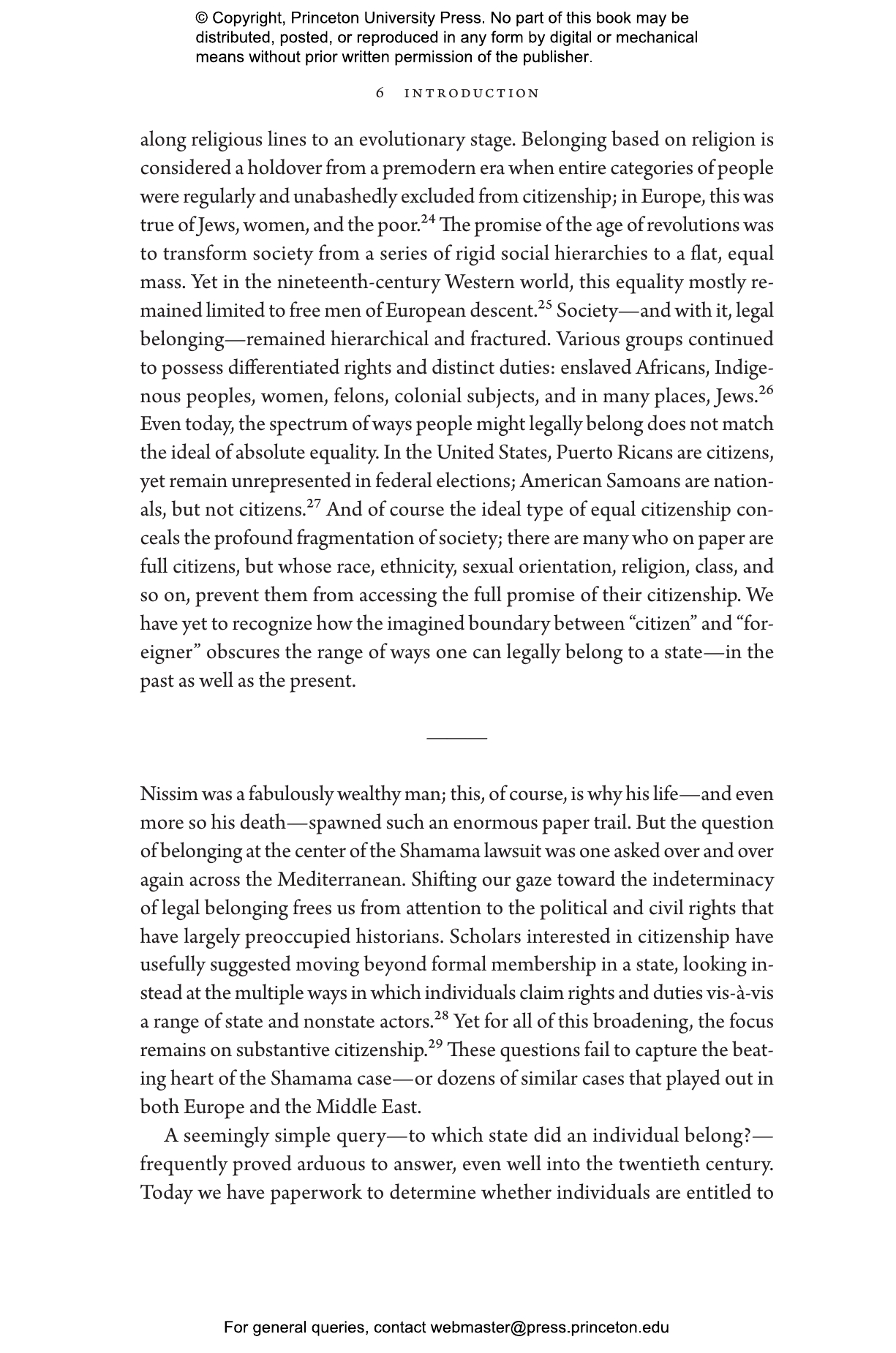 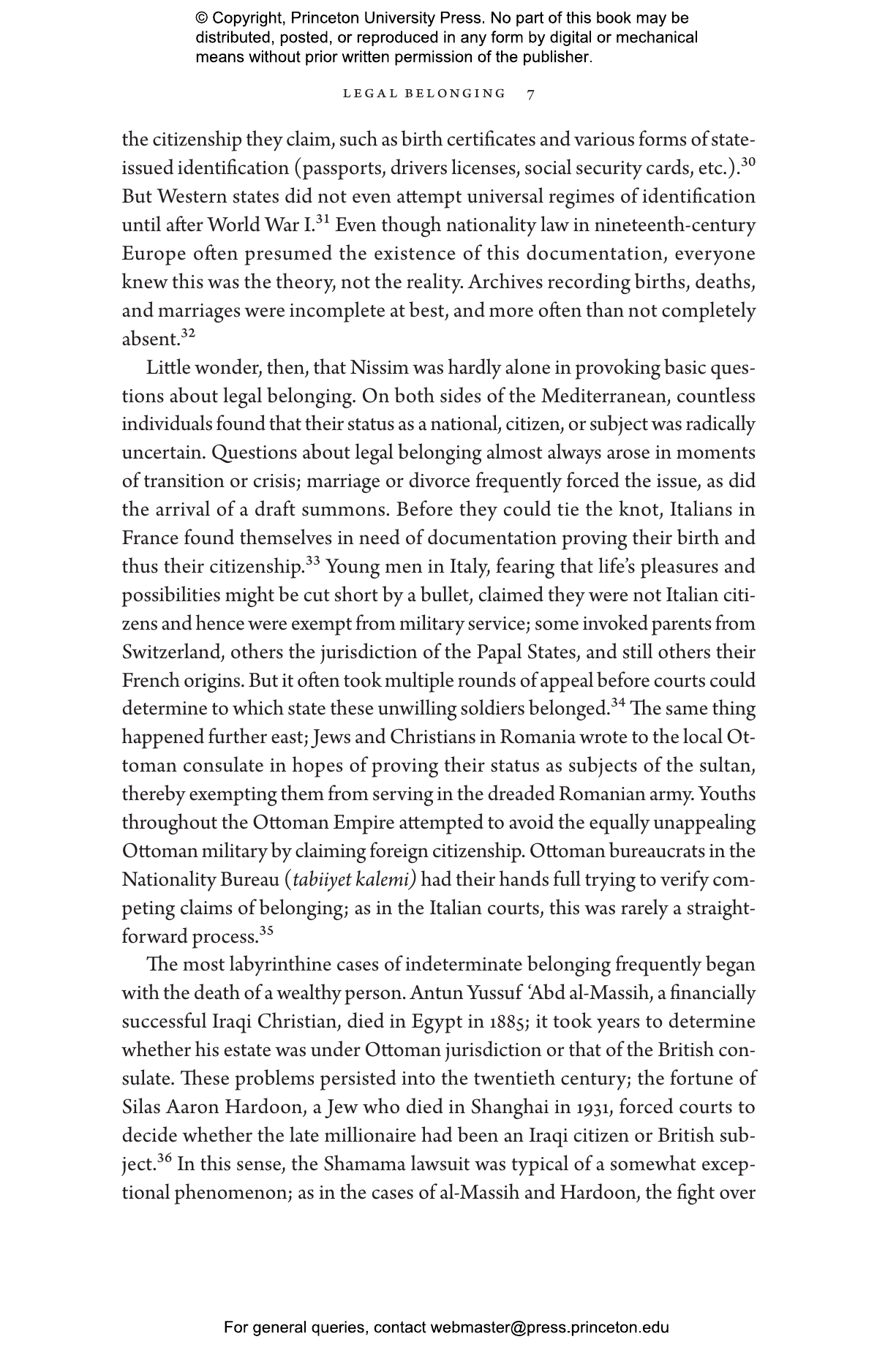 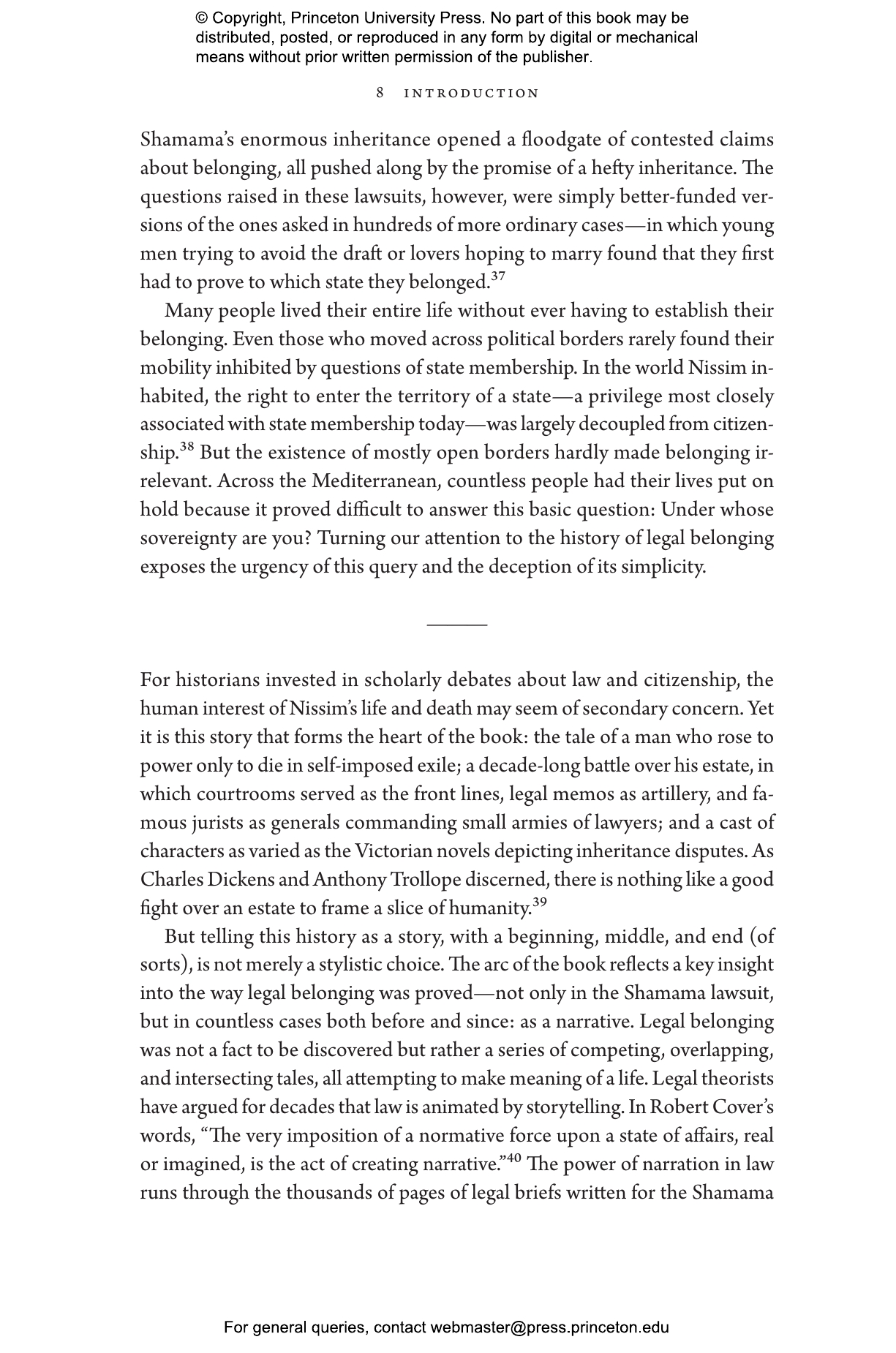 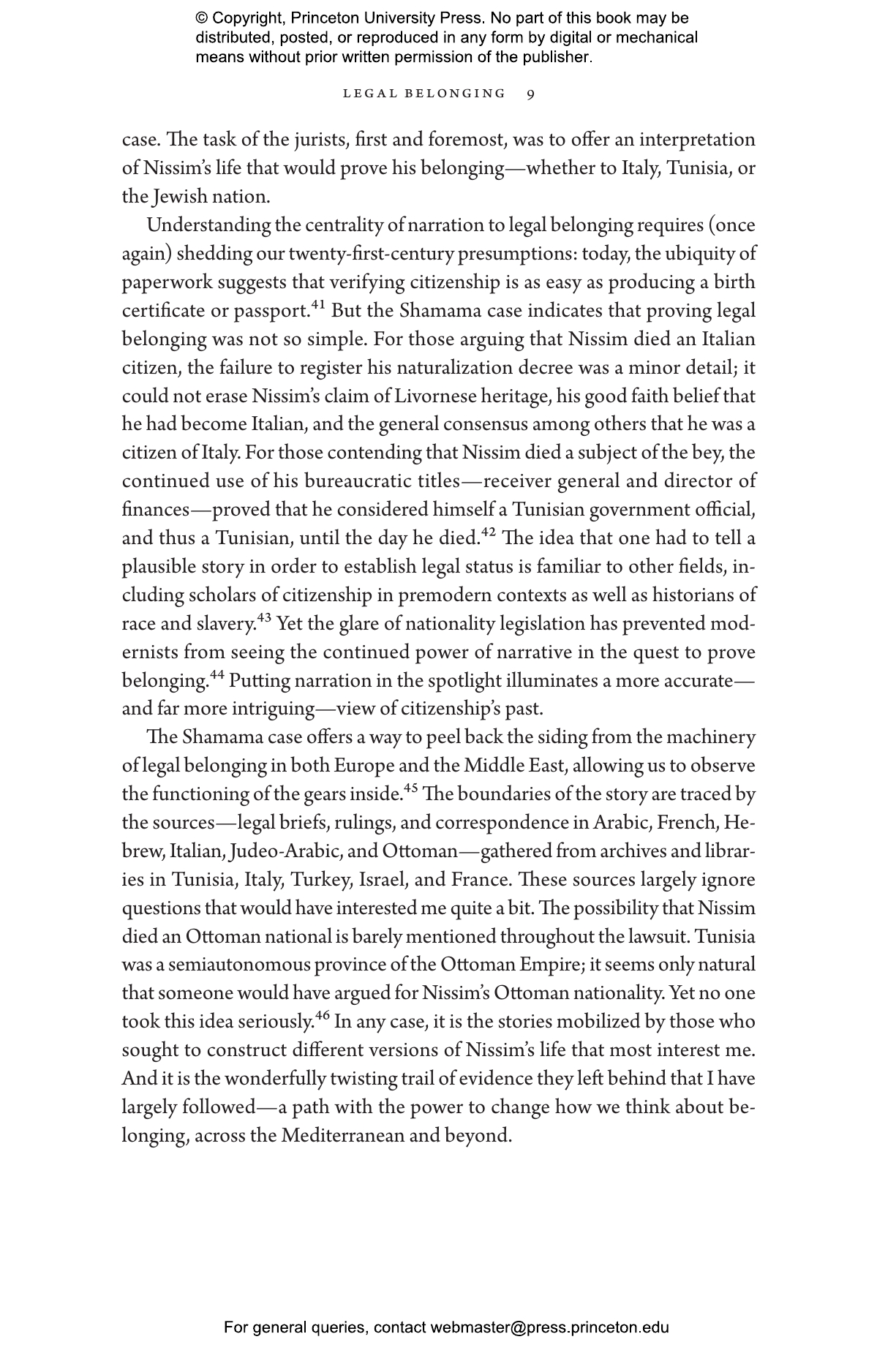 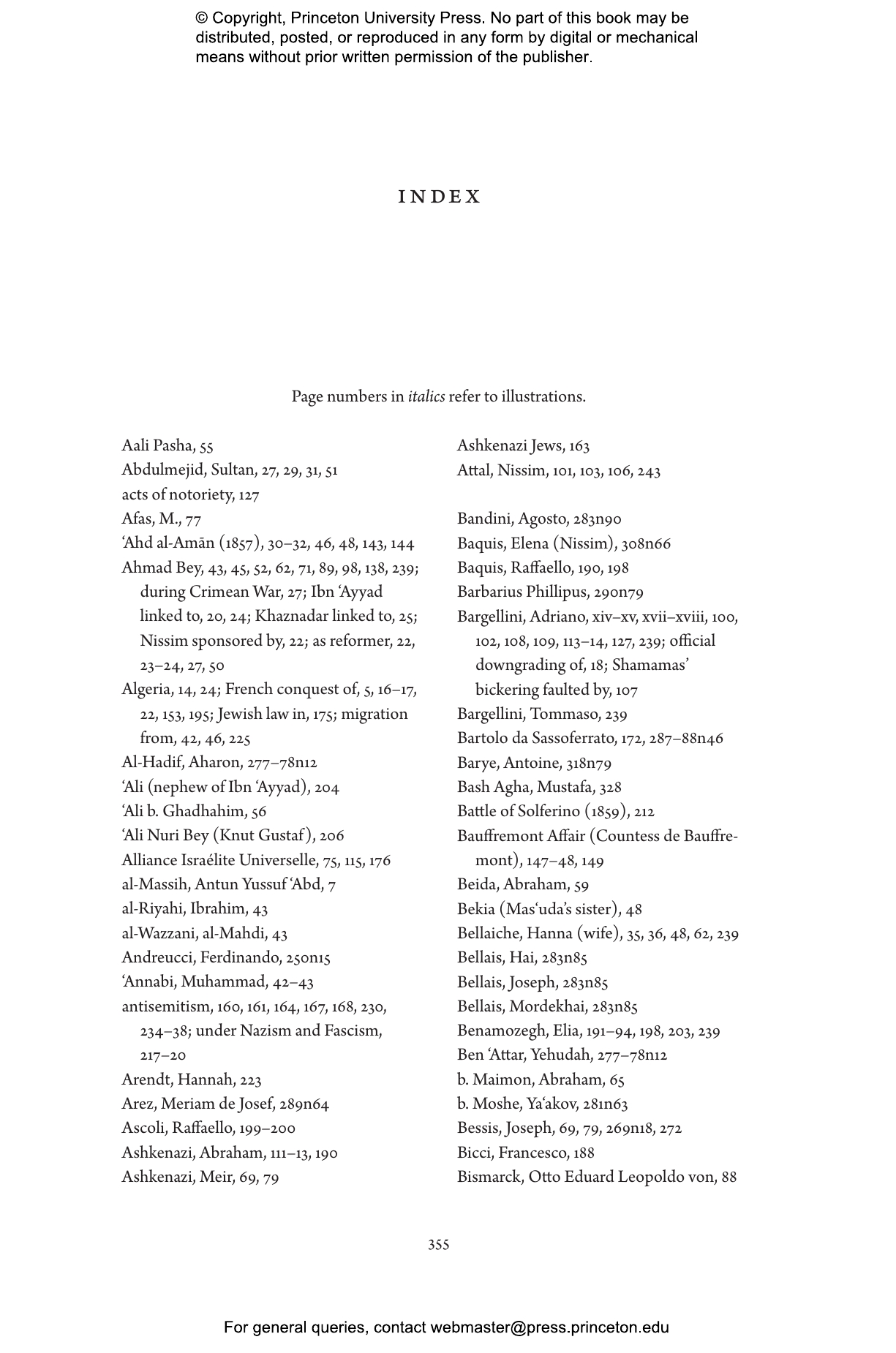 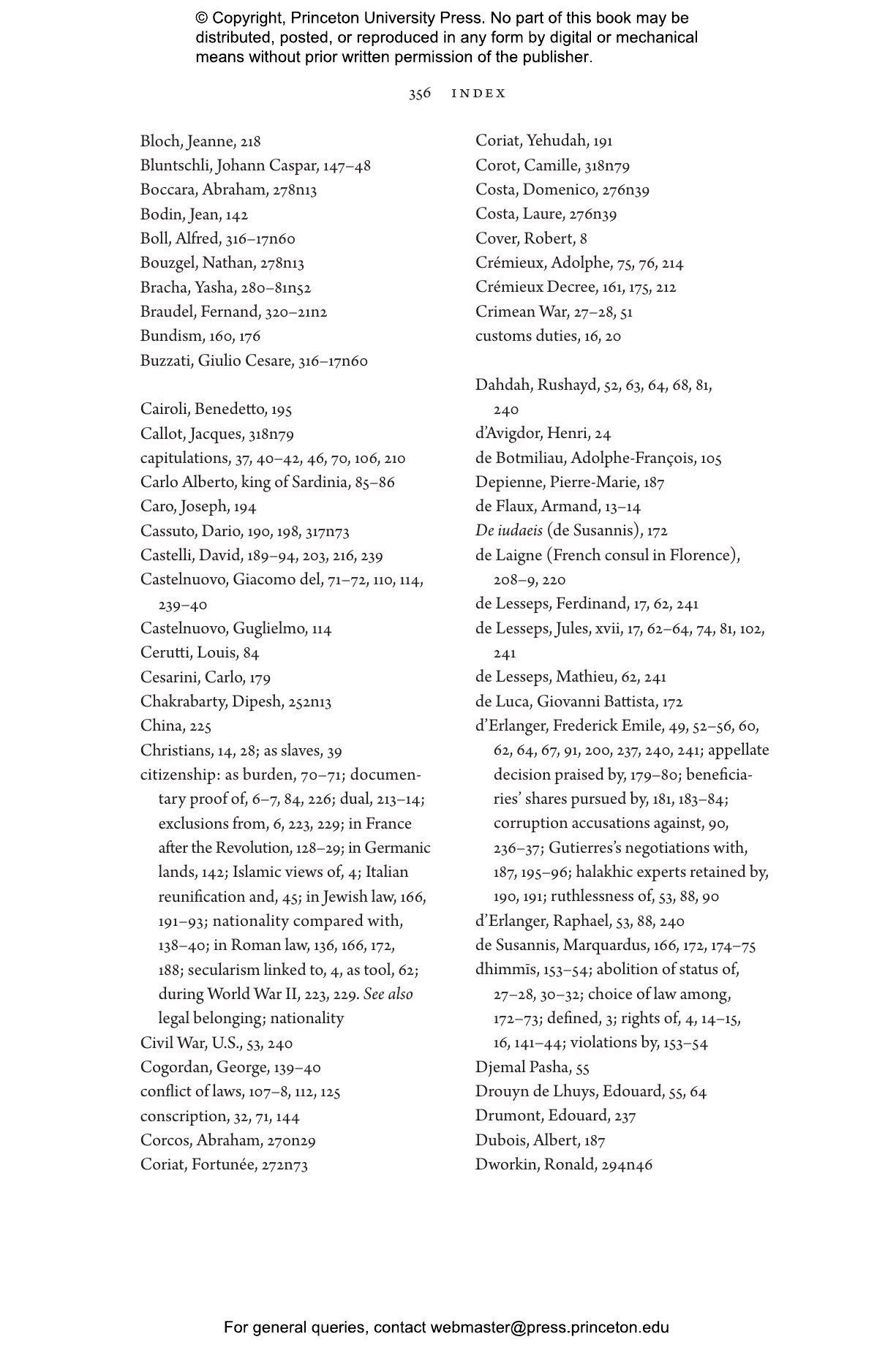 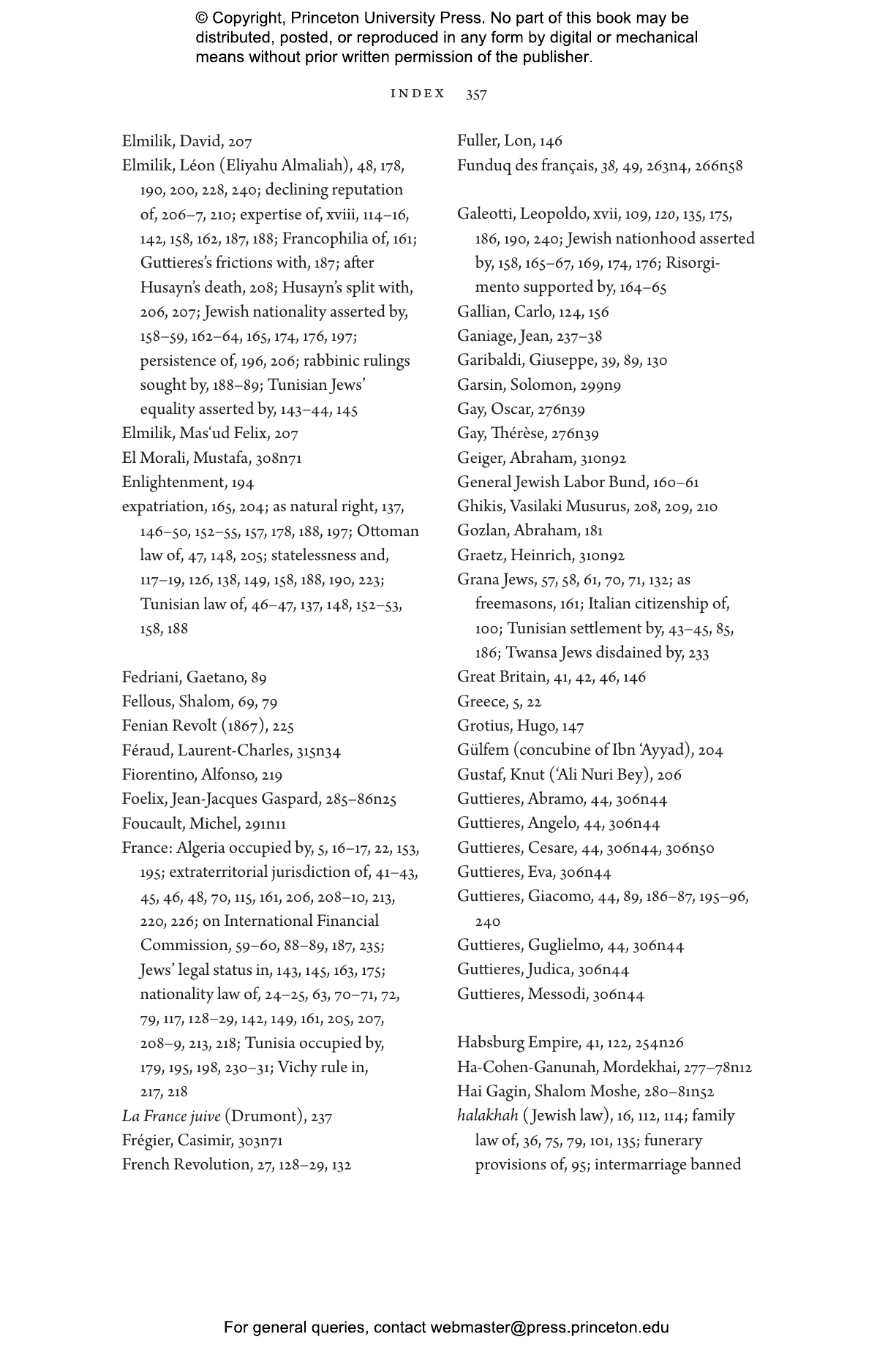 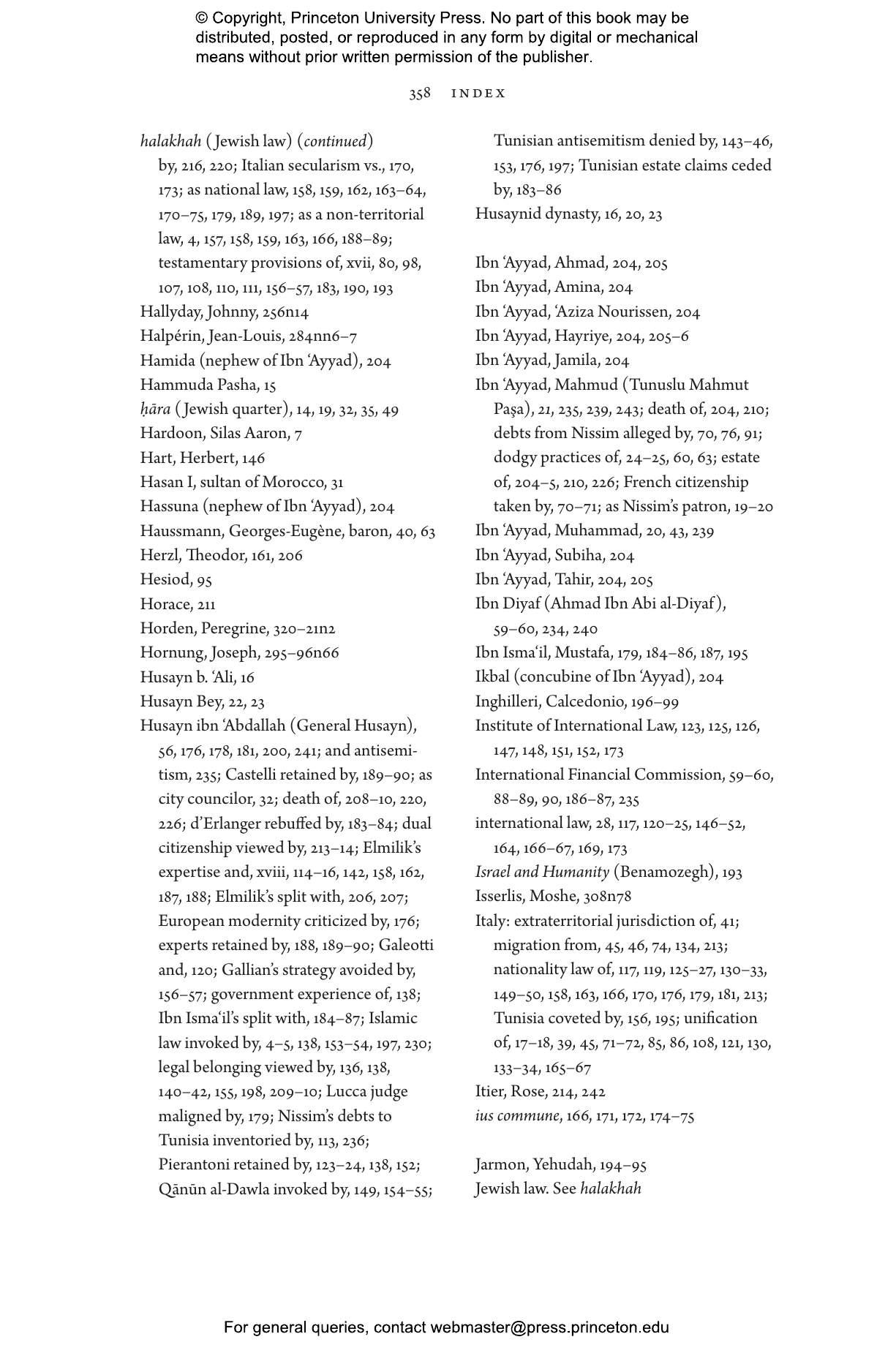 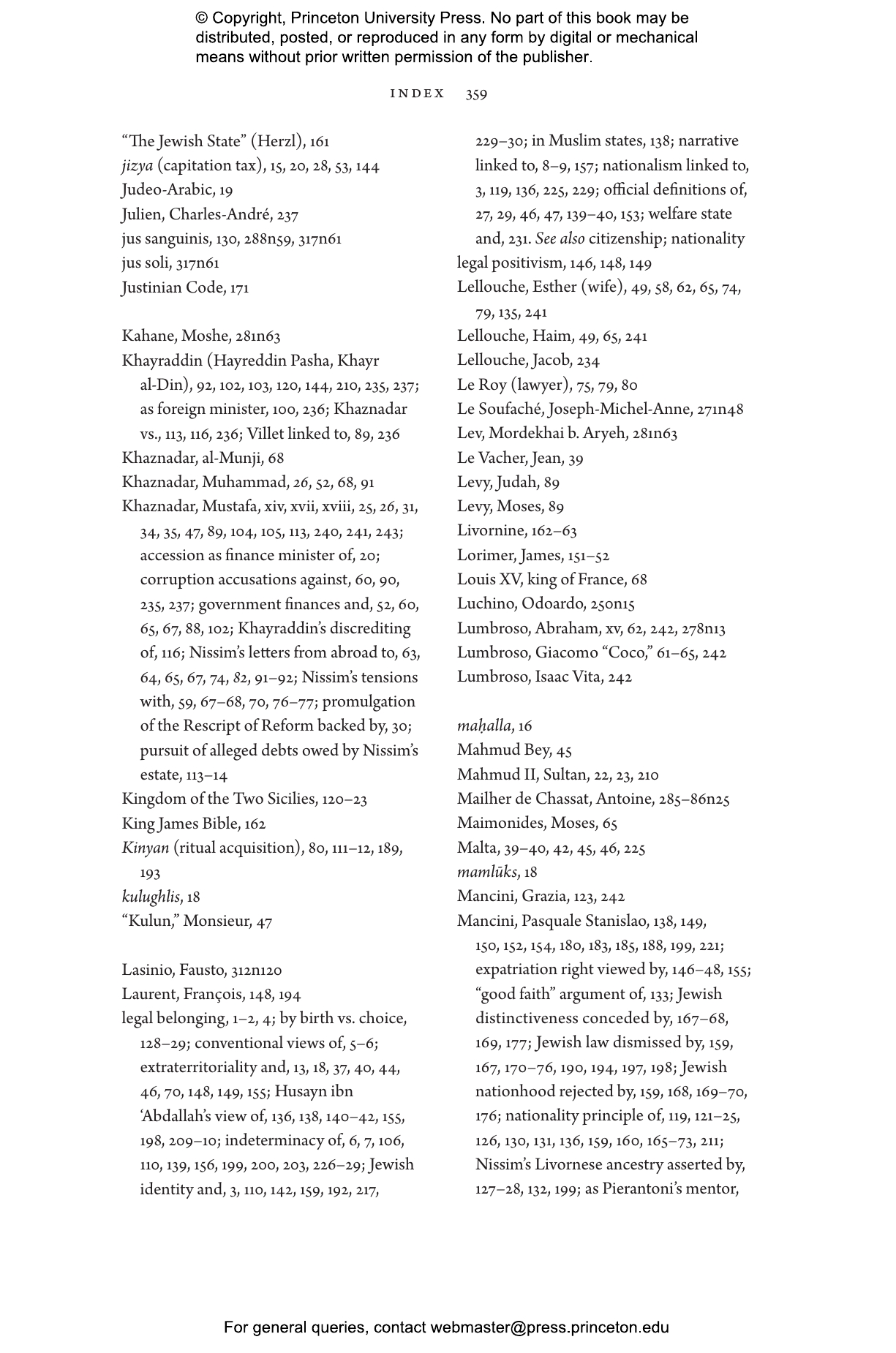 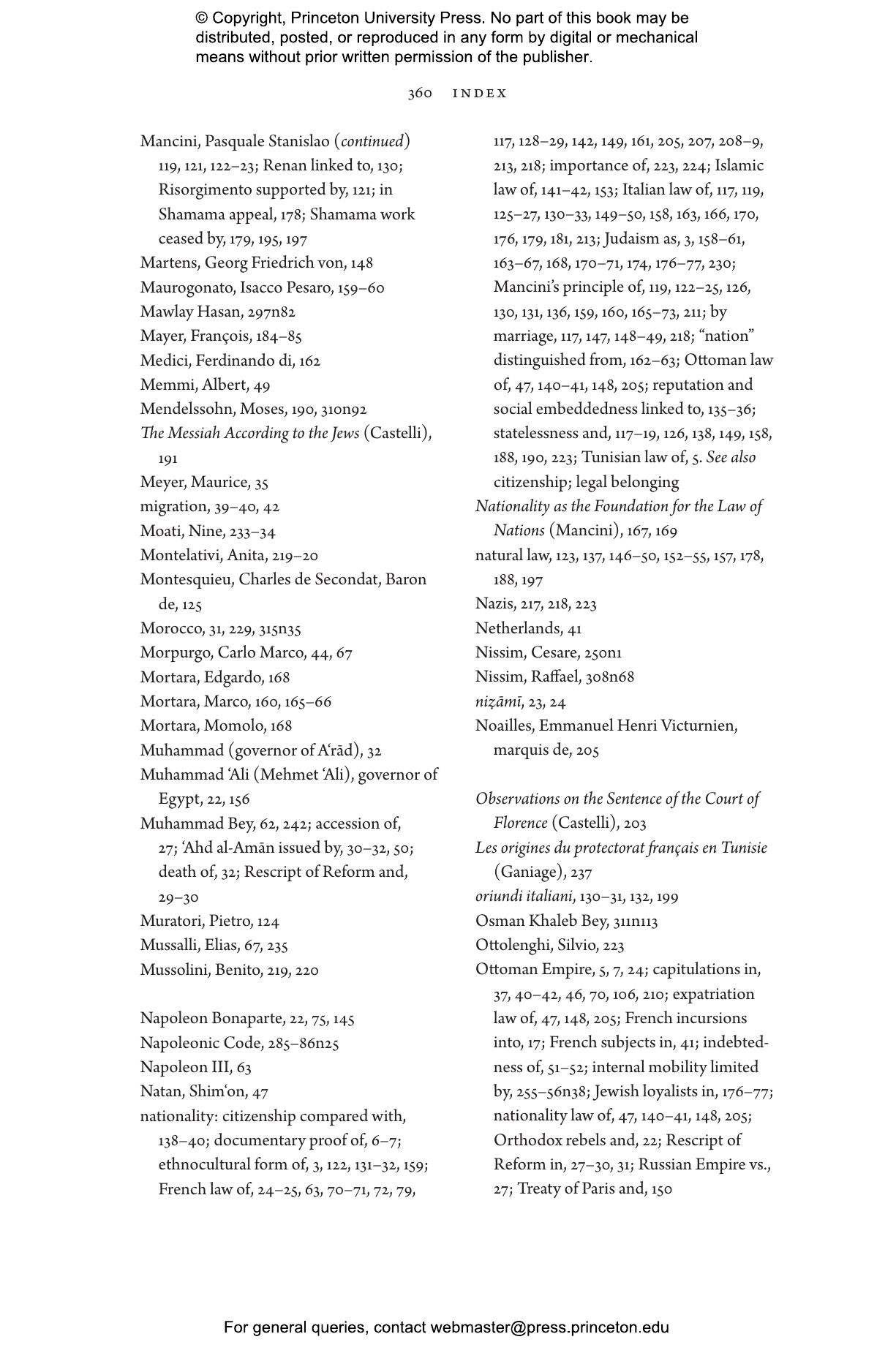 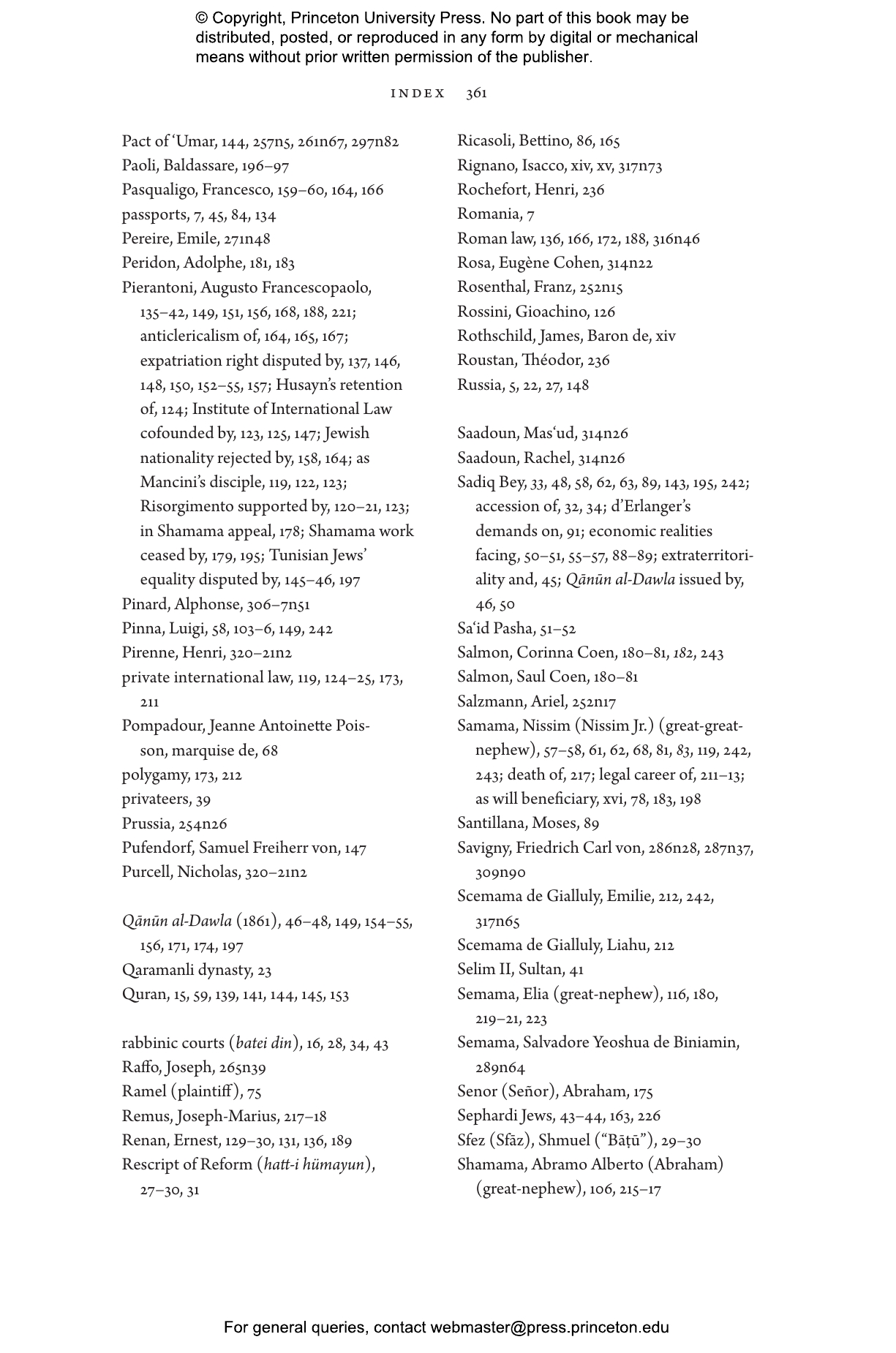 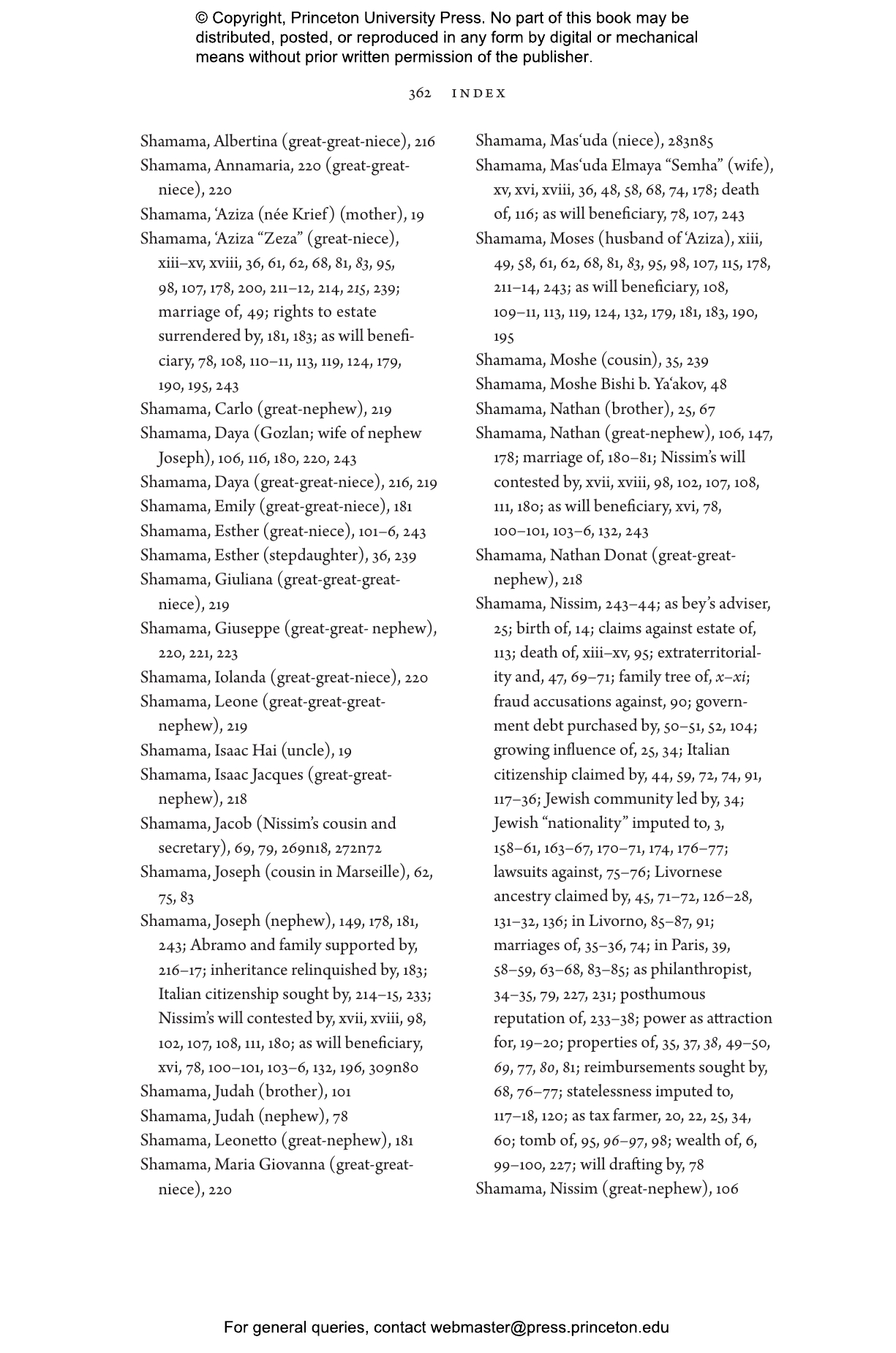 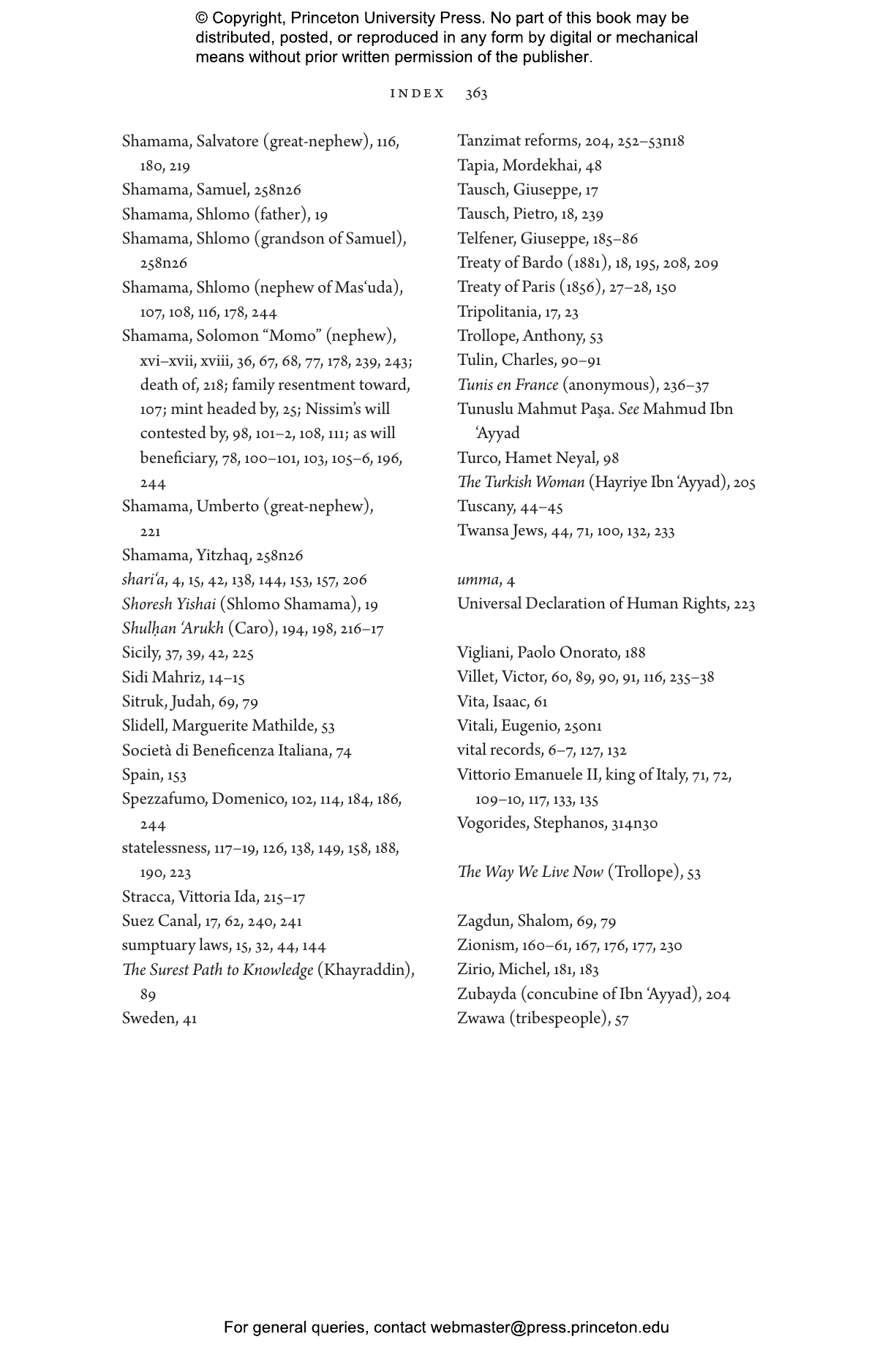 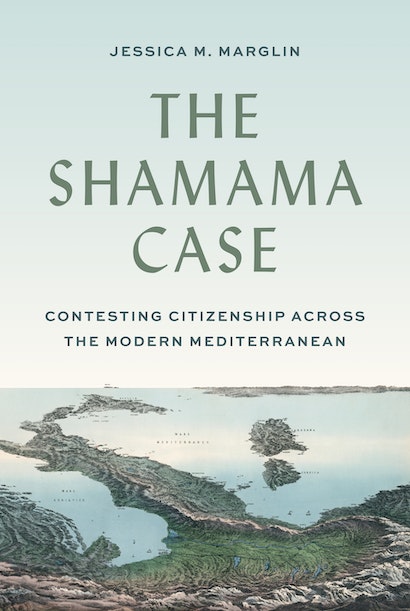 In the winter of 1873, Nissim Shamama, a wealthy Jew from Tunisia, died suddenly in his palazzo in Livorno, Italy. His passing initiated a fierce lawsuit over his large estate. Before Shamama’s riches could be disbursed among his aspiring heirs, Italian courts had to decide which law to apply to his estate—a matter that depended on his nationality. Was he an Italian citizen? A subject of the Bey of Tunis? Had he become stateless? Or was his Jewishness also his nationality? Tracing a decade-long legal battle involving Jews, Muslims, and Christians from both sides of the Mediterranean, The Shamama Case offers a riveting history of citizenship across regional, cultural, and political borders.

On its face, the crux of the lawsuit seemed simple: To which state did Shamama belong when he died? But the case produced hundreds of pages in legal briefs and thousands of dollars in lawyers’ fees before the man’s estate could be distributed among his quarrelsome heirs. Jessica Marglin follows the unfolding of events, from Shamama’s rise to power in Tunis and his self-imposed exile in France, to his untimely death in Livorno and the clashing visions of nationality advanced during the lawsuit. Marglin brings to life a Dickensian array of individuals involved in the case: family members who hoped to inherit the estate; Tunisian government officials; an Algerian Jewish fixer; rabbis in Palestine, Tunisia, and Livorno; and some of Italy’s most famous legal minds.

Drawing from a wealth of correspondence, legal briefs, rabbinic opinions, and court rulings, The Shamama Case reimagines how we think about Jews, the Mediterranean, and belonging in the nineteenth century.

Jessica M. Marglin is associate professor of religion, history, and law and the Ruth Ziegler Early Career Chair in Jewish Studies at the University of Southern California. She is the author of Across Legal Lines.

“The Shamama Case is a riveting international thriller on a human scale, raising pressing and timely questions about the nature of legal identity in the modern Mediterranean and offering a model of a life lived across borders, cultures, languages, and the law. Jessica Marglin has applied her characteristic rigor as a researcher and flair as a narrator to produce an essential book of Mediterranean, Jewish, and legal history.”—Sarah Abrevaya Stein, author of Family Papers: A Sephardic Journey through the Twentieth Century

“Marglin takes readers on a thrilling ride through the nineteenth-century Mediterranean, combining the energy of operatic drama and mystery with crucial, substantive analysis of law, sovereignty, and the meanings and experiences of Jewishness. We come out with a vivid understanding not just of a complicated life and its material legacy but of the unity and diversity of a Mediterranean in flux.”—Christine M. Philliou, author of Turkey: A Past against History

“Marglin takes us to a universe that is as fabulous as it is true. She skillfully unpacks what it means to inhabit a Mediterranean world where identities and borders are still in flux and where multiple communities, practices, rules, and experts coexist. She brilliantly shows how larger changes can allow individuals to refashion who they were, who they are, and what they would like to be.”—Tamar Herzog, author of A Short History of European Law

“A masterpiece of microhistory, this absorbing narrative sits atop a vast reservoir of sources from five countries and in a half-dozen languages. Strikingly original, the book’s accessible presentation and meticulous attention to context will make it appealing to students of colonial history, Middle Eastern history, and Jewish history as well as legal history."—Derek Penslar, Harvard University

“The Shamama Case is an astonishing piece of research, analysis, and writing that delves into competing and intersecting notions of nationality and belonging of various stripes and types. Unfailingly elegant throughout, this compelling book is unusually rich in archival material culled from an equally astonishing number of collections in many languages.”—Julia Clancy-Smith, University of Arizona