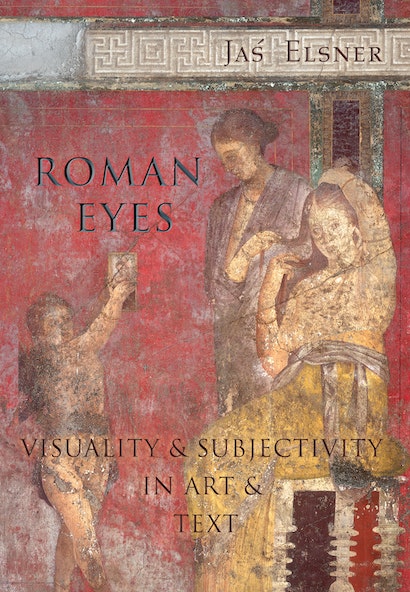 In Roman Eyes, Jas Elsner seeks to understand the multiple ways that art in ancient Rome formulated the very conditions for its own viewing, and as a result was complicit in the construction of subjectivity in the Roman Empire.


Elsner draws upon a wide variety of visual material, from sculpture and wall paintings to coins and terra-cotta statuettes. He examines the different contexts in which images were used, from the religious to the voyeuristic, from the domestic to the subversive. He reads images alongside and against the rich literary tradition of the Greco-Roman world, including travel writing, prose fiction, satire, poetry, mythology, and pilgrimage accounts. The astonishing picture that emerges reveals the mindsets Romans had when they viewed art — their preoccupations and theories, their cultural biases and loosely held beliefs.

Roman Eyes is not a history of official public art — the monumental sculptures, arches, and buildings we typically associate with ancient Rome, and that tend to dominate the field. Rather, Elsner looks at smaller objects used or displayed in private settings and closed religious rituals, including tapestries, ivories, altars, jewelry, and even silverware. In many cases, he focuses on works of art that no longer exist, providing a rare window into the aesthetic and religious lives of the ancient Romans.

Jaś Elsner is Humfry Payne Senior Research Fellow in Classical Archaeology at Corpus Christi College, University of Oxford, and Visiting Professor of Art History at the University of Chicago. His books include Imperial Rome and Christian Triumph and Art and the Roman Viewer.

"This volume is and will remain a significant contribution to the discourse on Roman art. What it does, it does admirably although it clings tenaciously to a single approach with its own limitations. It is useful as one piece of a complex puzzle about the intentions and reception of art."—Diana E. E. Kleiner, International Journal of the Classical Tradition

"The handsomely produced book . . . [is] sure to do much to shift the parameters of Roman 'art history' even further and to enrich its discussion."—Peter Stewart, Art History

"A book that is largely a collection of previously published papers runs the risk of presenting a disjointed argument. But that is not the case here. Elsner's revisions have provided a complex, but coherent argument that explores the act of viewing in the GrecoRoman world and makes a number of important observations. The interweaving of text and image, the exploration of cult practice and the discussion of private art in its context means that the book will be of interest to more than those interested in art history. It deserves to find a prominent place in collections dealing with Roman material culture."—John Geyssen, Phoenix

"The major virtue of this work, quite simply, is its author. Jaś Elsner is by now one of the most well-known figures in the field of ancient art history, respected for his notable erudition, extensive range of interests and expertise, his continuing productivity, and above all, for the originality of his mind. This volume stands both as a kind of convenient introduction to a number of issues that have engaged Elsner's attention over these last years—and continue to do so—and as a rich feast of sophisticated and often brilliant readings of individual texts and artifacts, always written with clarity and style."—Froma Zeitlin, Princeton University

"Jaś Elsner is the predominant contemporary scholar of the relationship between classical art and ancient subjectivity. His is a sensibility particularly attuned to the way in which viewing, desire, social constructions and generic discourses interplay and interact. It is simply impossible not to take his arguments into consideration if one works on Roman material culture and the place of art in literature."—Shadi Bartsch, University of Chicago