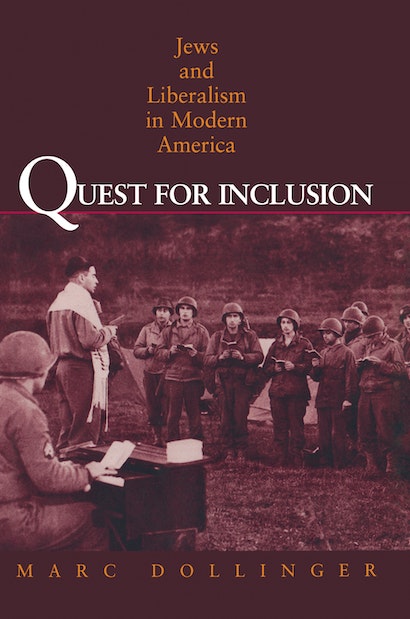 For over sixty years, Jews have ranked as the most liberal white ethnic group in American politics, figuring prominently in social reform campaigns ranging from the New Deal to the civil rights movement. Today many continue to defy stereotypes that link voting patterns to wealth. What explains this political behavior? Historians have attributed it mainly to religious beliefs, but Marc Dollinger discovered that this explanation fails to account for the entire American Jewish political experience. In this, the first synthetic treatment of Jewish liberalism and U.S. public policy from the 1930s to the mid-1970s, Dollinger identifies the drive for a more tolerant, pluralistic, and egalitarian nation with Jewish desires for inclusion in the larger non-Jewish society.

The politics of acculturation, the process by which Jews championed unpopular social causes to ease their adaptation to American life, established them as the guardians of liberal America. But, according to Dollinger, it also erected barriers to Jewish liberal success. Faced with a conflict between liberal politics and their own acculturation, Jews almost always chose the latter. Few Jewish leaders, for example, condemned the wartime internment of Japanese Americans, and most southern Jews refused to join their northern co-religionists in public civil rights protests. When liberals advocated race-based affirmative action programs and busing to desegregate public schools, most Jews dissented. In chronicling the successes, limits, and failures of Jewish liberalism, Dollinger offers a nuanced yet wide-ranging political history, one intended for liberal activists, conservatives curious about the creation of neo-conservatism, and anyone interested in Jewish communal life.

"This is an exemplary study of striking success in acculturation, differentiation, and rise to prosperity and prestige."—Choice

"The book's purpose 'is threefold: to document the impressive contributions of Jewish liberals to American political culture, to define the limits of American Jewish liberalism, and to reconcile the apparent contradiction between Jewish liberal strength and its serious failures.' Well grounded in both primary and secondary sources, the book does all three well."—Cheryl Greenberg, The Historian

"For those looking for an overview of the subject, Quest for Inclusion fills the bill very well. . . . [It] will be of great interest to those studying political liberalism, ethnic groups and American politics, and ethnic acculturation."—Dana Kaplan, Journal of the American Academy of Religion

"By tracing the nexus between ethnic acculturation and political conviction, Quest for Inclusion accounts for the Jewish community's many adaptations to American life, and asserts that a new understanding of its political goals and strategies must be sensitive to the dynamic nature of the American Jewish experience. While there has been much discussion about the origins and nature of Jewish liberalism, there has been relatively little attention paid to the breakdown of the consensus and why. Quest for Inclusion brings an important missing dimension to the discussion."—Murray Friedman, Myer and Rosaline Feinstein Center for American Jewish History, Temple University