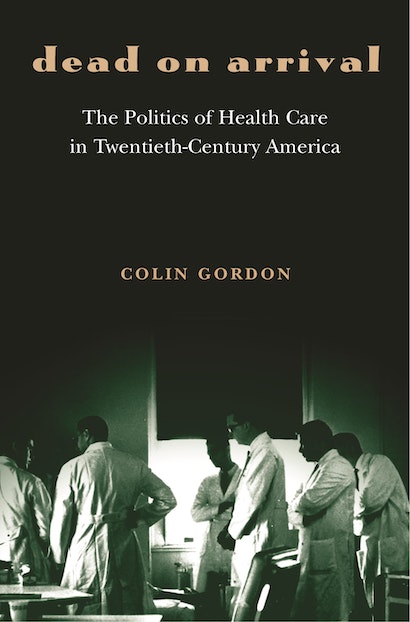 Why, alone among industrial democracies, does the United States not have national health insurance? While many books have addressed this question, Dead on Arrival is the first to do so based on original archival research for the full sweep of the twentieth century. Drawing on a wide range of political, reform, business, and labor records, Colin Gordon traces a complex and interwoven story of political failure and private response. He examines, in turn, the emergence of private, work-based benefits; the uniquely American pursuit of “social insurance”; the influence of race and gender on the health care debate; and the ongoing confrontation between reformers and powerful economic and health interests.

Dead on Arrival stands alone in accounting for the failure of national or universal health policy from the early twentieth century to the present. As importantly, it also suggests how various interests (doctors, hospitals, patients, workers, employers, labor unions, medical reformers, and political parties) confronted the question of health care — as a private responsibility, as a job-based benefit, as a political obligation, and as a fundamental right.


Using health care as a window onto the logic of American politics and American social provision, Gordon both deepens and informs the contemporary debate. Fluidly written and deftly argued, Dead on Arrival is thus not only a compelling history of the health care quandary but a fascinating exploration of the country’s political economy and political culture through “the American century,” of the role of private interests and private benefits in the shaping of social policy, and, ultimately, of the ways the American welfare state empowers but also imprisons its citizens.

Colin Gordon is Professor of History at the University of Iowa. He is the author of New Deals: Business, Labor, and Politics in America, 1920-1935.

"This is a sophisticated, impassioned, and well-documented analysis of the failures of twentieth-century American health reform efforts."—David Rosner, Business History Review

"[A] brilliantly recounted, thoughtful, and persuasive argument, not for simple explanations, but for a complex, on-the-ground discussion of what it was in the United States that made universal health insurance 'dead on arrival.'. . . [This book] is impeccably and impressively researched, drawing extensively on governmental and private archives."—Rosemary A. Stevens, Bulletin of the History of Medicine

"Another autopsy of the failure to implement a US national health plan? Yes, but Dead on Arrival is more interesting, informative, and compelling than others. Its strength lies in the integration of multiple social, economic, and political perspectives within a historical context to address the question, why no national health insurance?"—Bernard S. Bloom, Journal of the American Medical Association

"A welcome addition to a large literature on the modern United States medical system. . . . [It] illuminates the political deadlock and the institutional rigidity of the American system and offers a cogent explanation for why reform has been so intractable in health care throughout the last hundred years."—Declan O'Reilly, Enterprise & Society

"A treasure trove of information for anyone seriously wishing to tackle this issue."—Tom Gallagher, San Francisco Bay Guardian

"At a time of renewed popular and scholarly debate over America's exceptional welfare state, students of American public affairs will find much of value in Gordon's timely book."—Jacob S. Hacker, Political Science Quarterly

"This is a bold, clearly written, and engaging analysis of the place of universal health insurance in the American welfare state. It represents a serious argument about the American political arena, presents a plausible argument for its position, and backs that up with a standard of scholarship I respect."—Ted Marmor, Yale University, author of The Politics of Medicare