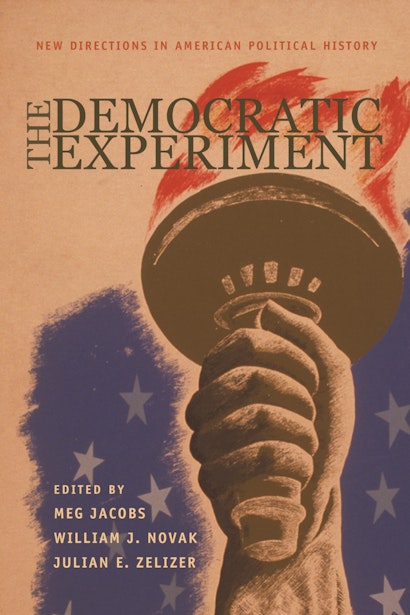 In a series of fascinating essays that explore topics in American politics from the nation’s founding to the present day , The Democratic Experiment opens up exciting new avenues for historical research while offering bold claims about the tensions that have animated American public life. Revealing the fierce struggles that have taken place over the role of the federal government and the character of representative democracy, the authors trace the contested and dynamic evolution of the national polity.


The contributors, who represent the leading new voices in the revitalized field of American political history, offer original interpretations of the nation’s political past by blending methodological insights from the new institutionalism in the social sciences and studies of political culture. They tackle topics as wide-ranging as the role of personal character of political elites in the Early Republic, to the importance of courts in building a modern regulatory state, to the centrality of local political institutions in the late twentieth century. Placing these essays side by side encourages the asking of new questions about the forces that have shaped American politics over time. An unparalleled example of the new political history in action, this book will be vastly influential in the field.

Meg Jacobs is Assistant Professor of History at the Massachusetts Institute of Technology. William Novak is Associate Professor of History at the University of Chicago and Research Fellow at the American Bar Foundation. He is the author of The People's Welfare. Julian E. Zelizer is Associate Professor of Public Policy, Public Administration, and Political Science at the State University of New York at Albany. He is the author of Taxing America.

"The present expansiveness and flexibility of political history are well represented in this collection of essays. The [book] should be quite useful in graduate seminars both general and topical."—Ronald P. Formisano, Journal of American History

"On rare occasions, an anthology comes along that reshapes scholarship in an entire field. The Democratic Experiment shows how to join culture and class, elections and the growth of the state, taxes and political theory into a fresh, unromantic understanding of power in the public sphere. With this splendid volume, a new political history has finally come of age."—Michael Kazin, author of The Populist Persuasion: An American History

"Political history is back. In a whirlwind of pent-up energy, this volume announces that questions about governmental capacity, suffrage and citizenship, sedition, constitutional amendment, court reform, inflation and consumerism, interest group electioneering, local government experimentation, antitax and antibussing revolts, the role of liberalism, and the partisan politics of family values are (and must be) on the agenda of historians. Its long-awaited return from the desert finds it better and stronger, more nuanced and inclusive, than before its exile. Readers will rejoice."—Elizabeth Sanders, author of Roots of Reform: Farmers, Workers, and the American State 1887-1917

"Those who have wondered what the future holds for American political history need wonder no more. In form and exposition, in theory and practice, The Democratic Experiment gives all the notice one could want of the exciting new directions that the genre is taking, and introduces the scholars who are leading its renewal."—Christopher Tomlins, American Bar Foundation, Chicago

"This superb collection of essays bring a welcome sophistication to the historical study of American politics—its culture and institutions."—Joyce Appleby, author of Inheriting the Revolution: The First Generation of Americans

"This is a terrific book—ambitious, iconoclastic, elegant, persuasive, exciting. The authors aim to reorient historians, rope in political scientists, and—at their most ambitious—reread America. They succeed on nearly every dimension. Each chapter raises issues that both historians and political scientists will be keen to engage. The collection adds up to a sustained, coherent whole, argued in many different keys and pitches. Very nice work indeed."—James A. Morone, Brown University, author of Hellfire Nation

"This book represents a job extremely well done. It offers a richer historical account of democratic conflicts than have most historically savvy political scientists. I particularly appreciate the attention to the nineteenth century, which is rarely explored in such depth among scholars of political history. Moreover, I do not think there is another volume that engages democratic conflict as comprehensively as does this one. The Democratic Experiment will enrich our understanding of liberal and democratic aspirations in America."—Sidney M. Milkis, University of Virginia, author of Political Parties and Constitutional Government