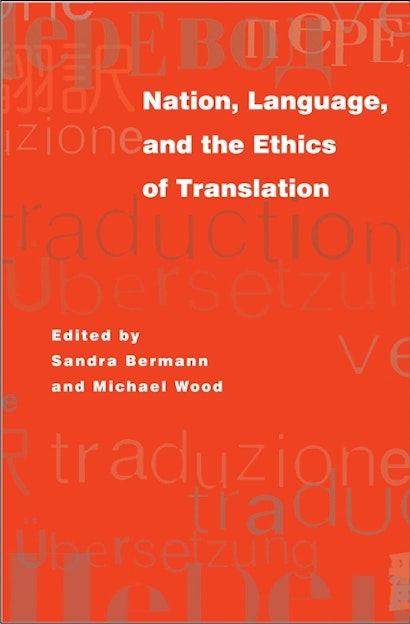 In recent years, scholarship on translation has moved well beyond the technicalities of converting one language into another and beyond conventional translation theory. With new technologies blurring distinctions between “the original” and its reproductions, and with globalization redefining national and cultural boundaries, “translation” is now emerging as a reformulated subject of lively, interdisciplinary debate. Nation, Language, and the Ethics of Translation enters the heart of this debate. It covers an exceptional range of topics, from simultaneous translation to legal theory, from the language of exile to the language of new nations, from the press to the cinema; and cultures and languages from contemporary Bengal to ancient Japan, from translations of Homer to the work of Don DeLillo.


All twenty-two essays, by leading voices including Gayatri Spivak and the late Edward Said, are provocative and persuasive. The book’s four sections — “Translation as Medium and across Media,” “The Ethics of Translation,” “Translation and Difference,” and “Beyond the Nation” — together provide a comprehensive view of current thinking on nationality and translation, one that will be widely consulted for years to come.

Sandra Bermann is Professor and Department Chair of Comparative Literature at Princeton University. She is the author of Sonnet over Time: A Study in the Sonnets of Petrarch, Shakespeare, and Baudelaire, and her translation of Allesandro Manzoni's Del romanzo storico appeared as On the Historical Novel. Michael Wood is Professor of English and Comparative Literature at Princeton University. He is the author of The Magician's Doubts: Nabokov and the Risks of Fiction (Princeton) and other books on literature and film.

"Sure to become required reading for students and scholars of the subject, . . . this new volume presents a well-balanced view of the current state of the profession and contains an unusually large percentage of essays (fully half) that can be considered significant contributions to the field."—Susan Bernofsky, Modern Language Notes

"This is a wonderful volume, a dance around the idea of 'translation,' threading it through a dozen languages and testing its claims through as many analytic registers. Each of its essays is lucid and compelling, with a substantial argument to make. Translation is given the broadest possible scope here, not exclusively text-based but embracing a wide range of phenomena, taking as its subject any act of revisiting, any 'remake' that brings new life to texts."—Wai Chee Dimock, Yale University

"This book is a major contribution to discussions of translation and should be a reference for years to come. Its scope puts it in a class of its own. I know of no other book on translation that covers this variety of topics, languages, and cultures or that raises such interesting questions. Every single essay merits attention. Sandra Bermann's introduction is a model of clarity and an excellent summary of the issues discussed, and the section introductions are likewise commendable."—Jean Franco, Columbia University, author of The Decline and Fall of the Lettered City: Latin America in the Cold War

"The debate on cultural globalization suffers from an inability to tackle the notion of translation in its concrete linguistic and historical reality as well as in its broad philosophical dimensions. This book, edited by Sandra Bermann and Michael Wood and lucidly introduced by Bermann, is an incisive contribution to an emerging kind of global translation studies. It contains an enormous amount of valuable material, interesting insight, and fresh learning."—Andreas Huyssen, Columbia University, author of Present Pasts: Urban Palimpsests and the Politics of Memory