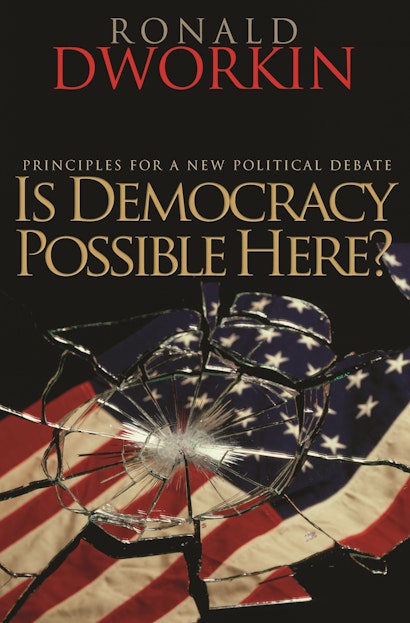 Politics in America are polarized and trivialized, perhaps as never before. In Congress, the media, and academic debate, opponents from right and left, the Red and the Blue, struggle against one another as if politics were contact sports played to the shouts of cheerleaders. The result, Ronald Dworkin writes, is a deeply depressing political culture, as ill equipped for the perennial challenge of achieving social justice as for the emerging threats of terrorism. Can the hope for change be realized? Dworkin, one the world’s leading legal and political philosophers, identifies and defends core principles of personal and political morality that all citizens can share. He shows that recognizing such shared principles can make substantial political argument possible and help replace contempt with mutual respect. Only then can the full promise of democracy be realized in America and elsewhere.


Dworkin lays out two core principles that citizens should share: first, that each human life is intrinsically and equally valuable and, second, that each person has an inalienable personal responsibility for identifying and realizing value in his or her own life. He then shows what fidelity to these principles would mean for human rights, the place of religion in public life, economic justice, and the character and value of democracy. Dworkin argues that liberal conclusions flow most naturally from these principles. Properly understood, they collide with the ambitions of religious conservatives, contemporary American tax and social policy, and much of the War on Terror. But his more basic aim is to convince Americans of all political stripes — as well as citizens of other nations with similar cultures — that they can and must defend their own convictions through their own interpretations of these shared values.

Ronald Dworkin (1931-2013), winner of the 2007 Ludvig Holberg International Memorial Prize, was the author of many books, including Sovereign Virtue, Freedom's Law, and Life's Dominion. He was the Frank Henry Sommer Professor of Law at New York University and the Bentham Professor of Jurisprudence at University College London.

"Of the season's books deploring the quality of our political discourse, the classiest is Ronald Dworkin's Is Democracy Possible Here?"—Michael Kinsley, New York Times

"Can it be legitimate to set aside the normal constitutional rights to privacy and to freedom from arbitrary arrest and detention—or from being tortured, in the case of suspected terrorists? Can we balance their rights against the risk to other people's right to life itself, so as to justify some downgrading of rights of terrorist suspects? With painstaking clarity Dworkin shows how such a preparedness selectively to downgrade protection of fundamental rights offends the deepest principles of the US Constitution, when in turn we read these as concretizing more fundamental principles of human dignity...Is Democracy Possible Here? is a strong opening statement in this hoped-for debate, from a resolutely liberal stance."—Neil MacCormick, Times Literary Supplement

"Ronald Dworkin . . . argues that liberals and conservatives must realize that each camp is working for the same goal of a better nation. . . . Dworkin's book deserves careful consideration and response."—Publishers Weekly

"A perceptive and penetrating book. Mr. Dworkin's distinction between a tolerant religious community and a tolerant secular community, and his argument about balancing security against honor and not against rights, should be required reading for every American."—The New York Observer

"[Dworkin's] object is not to confirm liberals' prejudices, whether well or ill founded. It is to argue a way out of prejudices on both sides: he does it with grace and, for the most part, with justice. . . . [T]he book has real value. For its purpose is to remind us that a healthy debate is impossible without a culture of argument and a desire by political leaders to find an agreement to differ based on mutual recognition of the nature of the issue and its centrality to political life."—John Lloyd, Financial Times

"Eminent philosopher Dworkin . . . attempts to address our 'degraded politics,' which he believes threaten the legitimacy of America's political order, by proposing two principles that can be shared even among those on opposite edges of today's political divides: that each human life has objective value and that each person has responsibility for realizing the potential of his or her own life. . . . [This is] among the most accessible of Dworkin's many books."—Robert F. Nardini, Library Journal

"There is much to recommend in Dworkin's short book. . . . His quest to discover the common ground he and his fellow citizens actually share is admirable. His recognition that the common ground is to be found in widely shared and deeply held premises about the equality and freedom of all is sound. And his case on behalf of progressive reform . . . is elegantly put and will provide fellow left-liberals with fresh inspiration and conservatives with fresh challenges."—Peter Berkowitz, First Things

"Ronald Dworkin's latest masterpiece . . . will appeal to anyone interested in learning more about the current state of American politics. As well, it will also appeal to anyone interested in political pedagogy and contemporary politics. Here, they will find a rich source of material regarding the social and political debates of this time. Dworkin has succeeded in providing an historical context for his two core principles of American democracy, and his account of the current lack of debate within the public sphere will bring new frontiers of inquiry to readers of all political, legal, and moral backgrounds. This is a book that deserves thoughtful consideration and engaged response; I highly recommend it."—Stephanie Zubcic Stacey, European Legacy

"In Is Democracy Possible Here? Ronald Dworkin throws down the gauntlet to conservatives. He articulates a compelling bipartisan account of the abstract principles that govern political decisions and he then argues, trenchantly, that those very principles condemn the conservative agenda. Breathtaking in its conception and peppered with shocking observations about current U.S. domestic and foreign policy, Dworkin's book provides a challenge that conservatives simply cannot ignore. Has he misidentified theprinciples or misunderstood their implications? The naysayers had better have an answer."—Michael Smith, Princeton University

"Ronald Dworkin is indisputably among the world's leading legal and political philosophers. Here, he tackles major issues of political life in our time and offers challenging analysis and practical conclusions. Writing for a wide audience, he pulls together diverse perspectives in relation to pressing problems and presents difficult ideas in striking and provocative form."—Kent Greenawalt, Columbia University School of Law