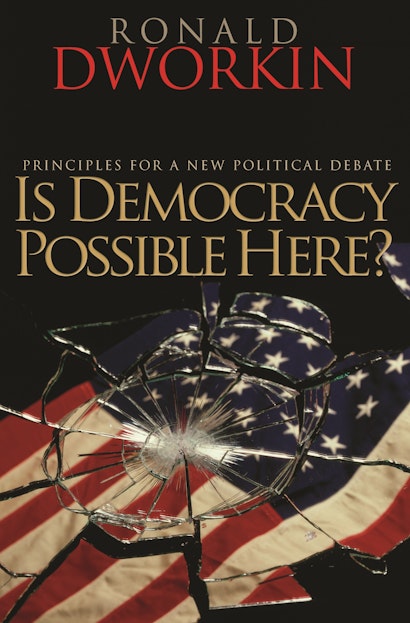 Politics in America are polarized and trivialized, perhaps as never before. In Congress, the media, and academic debate, opponents from right and left, the Red and the Blue, struggle against one another as if politics were contact sports played to the shouts of cheerleaders. The result, Ronald Dworkin writes, is a deeply depressing political culture, as ill equipped for the perennial challenge of achieving social justice as for the emerging threats of terrorism. Can the hope for change be realized? Dworkin, one the world’s leading legal and political philosophers, identifies and defends core principles of personal and political morality that all citizens can share. He shows that recognizing such shared principles can make substantial political argument possible and help replace contempt with mutual respect. Only then can the full promise of democracy be realized in America and elsewhere.


Dworkin lays out two core principles that citizens should share: first, that each human life is intrinsically and equally valuable and, second, that each person has an inalienable personal responsibility for identifying and realizing value in his or her own life. He then shows what fidelity to these principles would mean for human rights, the place of religion in public life, economic justice, and the character and value of democracy. Dworkin argues that liberal conclusions flow most naturally from these principles. Properly understood, they collide with the ambitions of religious conservatives, contemporary American tax and social policy, and much of the War on Terror. But his more basic aim is to convince Americans of all political stripes — as well as citizens of other nations with similar cultures — that they can and must defend their own convictions through their own interpretations of these shared values.

Ronald Dworkin (1931-2013), winner of the 2007 Ludvig Holberg International Memorial Prize, was the author of many books, including Sovereign Virtue, Freedom's Law, and Life's Dominion. He was the Frank Henry Sommer Professor of Law at New York University and the Bentham Professor of Jurisprudence at University College London.

"In Is Democracy Possible Here? Ronald Dworkin throws down the gauntlet to conservatives. He articulates a compelling bipartisan account of the abstract principles that govern political decisions and he then argues, trenchantly, that those very principles condemn the conservative agenda. Breathtaking in its conception and peppered with shocking observations about current U.S. domestic and foreign policy, Dworkin's book provides a challenge that conservatives simply cannot ignore. Has he misidentified theprinciples or misunderstood their implications? The naysayers had better have an answer."—Michael Smith, Princeton University

"Ronald Dworkin is indisputably among the world's leading legal and political philosophers. Here, he tackles major issues of political life in our time and offers challenging analysis and practical conclusions. Writing for a wide audience, he pulls together diverse perspectives in relation to pressing problems and presents difficult ideas in striking and provocative form."—Kent Greenawalt, Columbia University School of Law