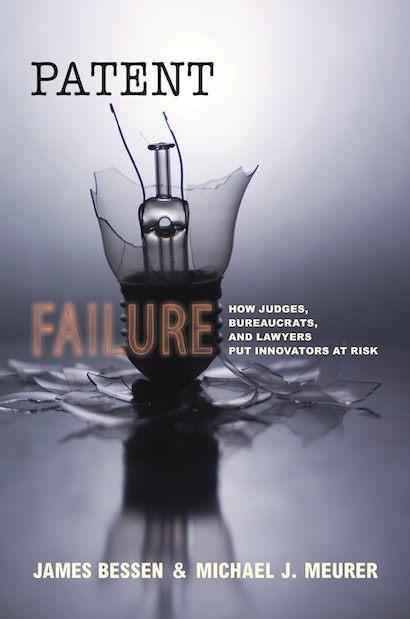 In recent years, business leaders, policymakers, and inventors have complained to the media and to Congress that today’s patent system stifles innovation instead of fostering it. But like the infamous patent on the peanut butter and jelly sandwich, much of the cited evidence about the patent system is pure anecdote — making realistic policy formation difficult. Is the patent system fundamentally broken, or can it be fixed with a few modest reforms? Moving beyond rhetoric, Patent Failure provides the first authoritative and comprehensive look at the economic performance of patents in forty years. James Bessen and Michael Meurer ask whether patents work well as property rights, and, if not, what institutional and legal reforms are necessary to make the patent system more effective.

Patent Failure presents a wide range of empirical evidence from history, law, and economics. The book’s findings are stark and conclusive. While patents do provide incentives to invest in research, development, and commercialization, for most businesses today, patents fail to provide predictable property rights. Instead, they produce costly disputes and excessive litigation that outweigh positive incentives. Only in some sectors, such as the pharmaceutical industry, do patents act as advertised, with their benefits outweighing the related costs.


By showing how the patent system has fallen short in providing predictable legal boundaries, Patent Failure serves as a call for change in institutions and laws. There are no simple solutions, but Bessen and Meurer’s reform proposals need to be heard. The health and competitiveness of the nation’s economy depend on it.

"James Bessen and Michael J. Meurer explode...illusions in their hard-hitting analysis of how patents perform economically. [T]his is an important book, for policymakers, lawyers, scholars and also for universities."—Fiona Reid, Times Higher Education

"The U.S. patent system is not working. It stands accused on all sides of stifling innovation instead of nurturing it. [E]conomist James Bessen and law academic Michael Meurer show that the system no longer provides predictable property rights. They go on to offer solutions based on empirical evidence from history, law and economics."—Harold Wegner, Financial Times

"Bessen and Meurer provide the first comprehensive review of the patent system in more than a generation, bringing together a survey of the available empirical data and a clear statement of the usefulness of and limits to the patents as property model."—Choice

"[R]eaders of Patent Failure may not be sanguine about the likelihood that Congress or other policy-makers even care about, much less rely on, empirical data to inform their decision-making. But this book successfully demonstrates that they should. Ultimately, Patent Failure is a significant contribution to the growing literature on the problems and promise of the US patent system. . . . Patent Failure rewards careful reading and is a book that cannot credibly be ignored by anyone seriously concerned about the fate of the US patent system."—William T. Gallagher, Law and Politics Book Review

"[W]ell-written and well-documented book. . . . [T]heir finding regarding the profitability of patents for patenting firms is the piece de résistance."—Julio H. Cole, Independent Review

"In Patent Failure, Bessen and Meurer examine the U.S. patent system's current procedural and operational shortcomings. Considering the book's titular promise to reveal the dangers posed by judges, bureaucrats, and lawyers, readers might expect an angry broadside leveled at the entire legal profession. On the contrary, Patent Failure is measured and methodical, a provocative, evidence-based book for the lawyer and entrepreneur alike. The authors are nothing if not reasonable men."—Strategy + Business

"[Patent Failure is] one of the most comprehensive empirical analyses of the patent system that has been performed in decades. Rather than piling up anecdotes of beleaguered innovators and rapacious patent trolls, Bessen and Meurer have done the hard work of collecting detailed data about the patent system. And the findings documented in Patent Failure are sobering."—Timothy B. Lee, ARS Technica

"In keeping with its title, Patent Failure provides a critical assessment of the nation's patent system. The book inevitably leads the reader to ponder the value of patents as property and as gauges of economic growth."—Livinia N. Jones, Centre Daily Times

"All in all, this book's advantage over other titles in the field is that it goes beyond models and theories providing a bright and well documented picture of the real world of the US patent system."—Andrea Filippetti, Research Policy

"It's an excellent book and completely worth reading."—Mike Masnick, Techdirt

"This is a pioneering and heroic effort to quantify the ways in which our patent system has failed to live up to its raison d'être: promoting innovation. The book will be controversial. But the authors make a forceful case that deserves to be heard."—Eric Maskin, Albert O. Hirschman Professor of Social Science at the Institute for Advanced Study and Nobel Laureate in Economics

"Bessen and Meurer provide a strong, balanced empirical analysis of the real-world effects the U.S. patent system has on our twenty-first century economy. Their book is essential reading for anyone interested in promoting a patent system that truly drives innovation for the U.S. economy."—Mark Chandler, senior vice president and general counsel, Cisco Systems

"Bessen and Meurer's book is grounded in both economics and the real world. It hits the right notes for scholars, lawyers, and policymakers. Timely and important, Patent Failure is the best of the books on patent reform."—Mark Lemley, Stanford University