A history of celebrity from Byron to Beckham 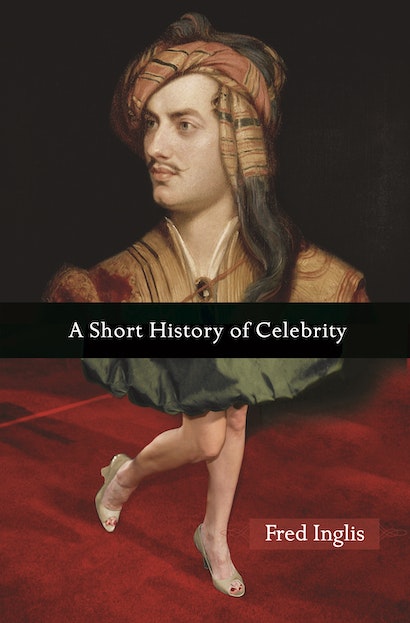 Love it or hate it, celebrity is one of the dominant features of modern life—and one of the least understood. Fred Inglis sets out to correct this problem in this entertaining and enlightening social history of modern celebrity, from eighteenth-century London to today’s Hollywood. Vividly written and brimming with fascinating stories of figures whose lives mark important moments in the history of celebrity, this book explains how fame has changed over the past two-and-a-half centuries.

Starting with the first modern celebrities in mid-eighteenth-century London, including Samuel Johnson and the Prince Regent, the book traces the changing nature of celebrity and celebrities through the age of the Romantic hero, the European fin de siècle, and the Gilded Age in New York and Chicago. In the twentieth century, the book covers the Jazz Age, the rise of political celebrities such as Mussolini, Hitler, and Stalin, and the democratization of celebrity in the postwar decades, as actors, rock stars, and sports heroes became the leading celebrities.

Arguing that celebrity is a mirror reflecting some of the worst as well as some of the best aspects of modern history itself, Inglis considers how the lives of the rich and famous provide not only entertainment but also social cohesion and, like morality plays, examples of what—and what not—to do.

This book will interest anyone who is curious about the history that lies behind one of the great preoccupations of our lives.

Fred Inglis is Honorary Professor of Cultural History at the University of Warwick and a former member of the School of Social Science at the Institute for Advanced Study in Princeton. He is the author of more than twenty books, including The Cruel Peace: Everyday Life in the Cold War (Basic).

"Inglis's treatment is whimsical rather than exhaustive. Alert to the cultural value of iconic figures from Lord Byron to Eric Clapton, he also offers a stimulating assessment of how celebrity has, historically, involved fluctuating proportions of knowability and remoteness."—New Yorker

"The purpose of A Short History of Celebrity, Fred Inglis' brief, energetic, stimulating screed, is to tell us that, although we think we live in the age of celebrity, it's been quite a while in coming."—Martin Rubin, Los Angeles Times

"Inglis is more even-handed than many of his colleagues, and sager too, able to see beyond the ephemera of the moment to take a more expansive view. He asks not simply what the culture of celebrity means today, but where it came from."—Darrin M. McMahon, Wall Street Journal

"In his thoughtful survey of pop culture since the dawn of modernity, Fred Inglis argues that mass obsession with the lives (and deaths) of the rich and famous didn't just pop up out of the blue. . . . In an attempt to give some depth to all the shallowness, Inglis, the author of 20 books including a biography of the late cultural anthropologist Clifford Geertz, goes in search of origins."—Joshua Kendall, Boston Globe

"With scholarly dexterity . . . Inglis describes the manipulation of political celebrities by the likes of Hitler and Stalin, followed by the postwar democratization of fame, as movie stars, sports heroes, and rock guitarists became leading celebrities. Through it all, Inglis argues the lucrative exploitation of the lives of the rich and famous has entailed an appeal to what audiences think of themselves—for better and for worse. . . . The Bottom Line: The development of the fame business comes into clearer focus as a result of Inglis' sophisticated perspective. Four stars out of five."—Paul M. Barrett, Bloomberg Businessweek

"From the glamour of John F. Kennedy's 'Camelot' to Ronald Reagan's rise from B movies and Barack Obama's election campaign, celebrity makes power, money and the world go around. At long last, we have a decent book that goes some way to explain how it got this way."—Mark Beech, Bloomberg

"Byron was one of the first products of the alloy of glamour and publicity that we refer to as celebrity. In his new book, A Short History of Celebrity, Fred Inglis traces the phenomenon back to late 18th-century London. It was there, he argues, with its convergence of theatre and journalism and new opportunities to shop, that celebrity began."—Aditya Chakrabortty, The Guardian

"Fred Inglis has added his learned, sometimes curmudgeonly, often rhapsodic voice to the chorus, with a book that locates the origins of celebrity culture in the 18th century. . . . This emphasis on the history of emotion is what distinguishes Inglis's book from the other accounts of celebrity, making it more than just a great hall of historical fame. Inglis sees these emotional shifts as working concurrently with changing social forces that turned life itself into a spectator sport."—Lara Feigel, The Observer

"[A]n intriguing reflection on how the phenomenon of celebrity shapes our perception of ourselves and our satisfaction with our own images. . . . [Inglis] has crafted a playful but serious essay that delivers telling judgment on an important matter. It deserves a large and broad reading audience."—David Keymer, Library Journal

"Inglis is a magnificently erudite writer who lingers over his subject as though it were a good cigar."—Frances Wilson, Literary Review

"[A] very interesting book. . . . What makes his 'short history' so compelling is how Inglis combines an eye for captivating detail (the actor David Garrick being forced to kneel by a 'jeering audience'), the illuminating comparison (Sarah Bernhardt versus Lola Montez, Hitler versus Edward VIII), and the synoptic view ('A Very Short History of the Feelings'). . . . It not only surveys an extraordinary range of persons, their acts and their import in a sophisticated way, but it induces further thought about the ambivalent powers of celebrity."—Justin Clemens, Sydney Morning Herald

"A Short History of Celebrity is an excellent book. The prose is fabulous, and Inglis is brimming with insight and humor. Moreover, one can't help being drawn into tales of the rich and fabulous. However we may flatter ourselves, the stars are just not like us."—Alex Prescott-Couch, Berlin Review of Books

"In his smartly written and engaging book, cultural historian Inglis successfully tackles a potentially cumbersome topic with the brevity promised in the title. . . . Erudite and entertaining."—Choice

"His transatlantic argument weaves dozens of celebrity case studies into a compelling macro-narrative that artfully balances historical anecdote, cultural theory, histories of ideas, and rhetorical inquires. The result is a thoroughly readable and fascinating exposition of how celebrity identities have enthralled, defined, and reprised western cultures since the middle of the eighteenth century."—Brian Bates, Restoration and Eighteenth-Century Theatre

"Without doubt Inglis writes an original reference work that provides both a framework of analysis and a comprehensive inventory of illustrations, pointing to the centrality of celebrity to American life."—Adriana Neagu, American British and Canadian Studies

"With breathtaking range and panache, A Short History of Celebrity provides a keenly observed interpretation of the emergence of modern transatlantic popular culture. At once learned and accessible, Inglis's vivacious prose reveals the contradictions of icons as diverse as Joshua Reynolds and Lord Byron, the Beatles and Bob Dylan. His insights into the popular heroes of art, literature, and the stage and screen (including television), as well as politics and public life, enable us to appreciate continuities that stretch across two-hundred-and-fifty years."—Richard D. Brown, professor emeritus, University of Connecticut

"Celebrity is ripe for anatomizing, and in this enjoyable work of cultural history Inglis performs an exemplary dissection, showing both the pains and the pleasures, the shame and the virtues, of the modern cult of celebrity. This is vintage Inglis: funny, coruscating, biting."—Krishan Kumar, University of Virginia

"This is a fascinating, remarkable, and thought-provoking book. Its great value is that it doesn't begin with Survivor, Big Brother, or Oprah. Instead, Fred Inglis extends his study back to the eighteenth century and gives attention to painting, gossip columns, and wartime dictators, among much else. Inglis is a powerful and engaging writer and this book is a pleasure to read."—Tara Brabazon, University of Brighton

"Fred Inglis has a distinctive voice as he explores our ambivalence toward celebrities and the phenomenon of celebrity itself. Filled with examples and quotable passages, this is a heartfelt book by a man who is grounded in Wittgenstein yet familiar with David Beckham."—Richard Howells, King's College London