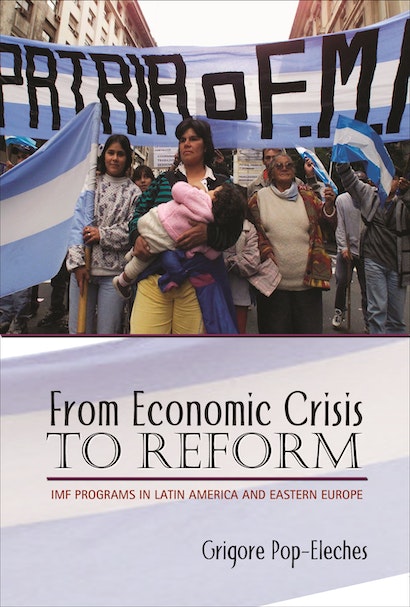 The wave of neoliberal economic reforms in the developing world since the 1980s has been regarded as the result of both severe economic crises and policy pressures from global financial institutions such as the International Monetary Fund (IMF). Using comparative evidence from the initiation and implementation of IMF programs in Latin America and Eastern Europe, From Economic Crisis to Reform shows that economic crises do not necessarily persuade governments to adopt IMF-style economic policies. Instead, ideology, interests, and institutions, at both the international and domestic levels, mediate responses to such crises.


Grigore Pop-Eleches explains that the IMF’s response to economic crises reflects the changing priorities of large IMF member countries. He argues that the IMF gives greater attention and favorable treatment to economic crises when they occur in economically or politically important countries. The book also shows how during the neoliberal consensus of the 1990s, economic crises triggered IMF-style reforms from governments across the ideological spectrum and how these reforms were broadly compatible with democratic politics. By contrast, during the Latin American debt crisis, the contentious politics of IMF programs reflected the ideological rivalries of the Cold War. Economic crises triggered ideologically divergent domestic policy responses and democracy was often at odds with economic adjustment. The author demonstrates that an economic crisis triggers neoliberal economic reforms only when the government and the IMF agree about the roots and severity of the crisis.

Grigore Pop-Eleches is assistant professor of politics and international affairs in the Woodrow Wilson School and the Department of Politics at Princeton University.

"This is an excellent book which brings a new and interesting perspective to an important issue. With the current global financial crisis heightening demand for IMF resources this book could not be timelier. . . . From Economic Crisis to Reform is an important study and a model of rigorous mixed method research that makes a significant contribution and that should be read widely. As the current global financial crisis prompts a number of former communist countries in Eastern Europe to turn to the IMF for support, scholars interested in understanding how such programs are likely to evolve should start by turning to Pop-Eleches's book."—Jeffrey Chwieroth, Review of International Organizations

"This is a sophisticated and substantively rich book. In addition to making a significant contribution to the burgeoning subfield of International Monetary Fund studies, it serves as a rare example of multimethod research that combines formal modeling, quantitative testing, and qualitative case studies. From Economic Crisis to Reform is informative even for a specialist and accessible even for a newcomer to the field."—Randall Stone, Perspectives on Politics

"From Economic Crisis to Reform is a very rich, carefully researched work that is especially commendable for its ambitious research design, aimed at accounting for the dynamics of international- and domestic-level interactions regarding economic reform. Its comprehensive and illuminating nature should make it an indispensable reading for students of international and comparative political economy, international relations, and comparative politics more broadly. Its nuanced discussion should also make the book of great interest to area specialists and practitioners alike."—Aleksandra Sznajder Lee, Comparative Political Studies

"The author's focus on regional and temporal factors is buttressed by an impressive research design. . . . Pop-Eleches has written a book that will be insightful for those looking to understand the future evolution of developing-country economies."—Martin S. Edwards, Political Science Quarterly

"Grigore Pop-Eleches, a political scientist, has written a useful book on the interactions among the economic and political interests of the IMF and its interlocutor governments during initiation and implementation of programmes. . . . [From Economic Crisis to Reform] is really interesting and well written, and the empirical analysis is carefully implemented."—Sylvia Marchesi, Economic Record

"[From Economic Crisis to Reform] presents a tremendous amount of information and provides a number of interesting insights into the politics of IMF programs."—C. Kilby, Choice

"From Economic Crisis to Reform provides a rigorous and nuanced analysis of the international and domestic politics of IMF lending programs. Through quantitative analysis and careful case-study comparisons of Latin America and Eastern Europe, Grigore Pop-Eleches takes us well beyond oversimplified linear arguments about the effects of economic crises. His cross-regional and cross-time research shows convincingly that changes in the international context, and variations in the components of different crises strongly condition both IMF lending priorities and the impact of partisanship and democracy. This outstanding book substantially advances our general understanding of the international and domestic politics of economic reform."—Robert Kaufman, Rutgers University

"This is a significant and substantively rich book. Pop-Eleches combines quantitative and qualitative evidence to show that IMF lending reflects the priorities of its leading members, but that those priorities differed substantially between the Latin American cases in the 1980s and the post-Communist cases in the 1990s."—Randall W. Stone, University of Rochester

"From Economic Crisis to Reform constructs a theory on how the international and political environment affects IMF interventions in developing countries and tests this theory using a rich set of cases. This book provides an important contribution to the scholarship on the political economic of IMF interventions."—Nathan Jensen, Washington University

"Well-written and well-organized, this book demonstrates a rare capacity to not only deal with two regions, but also with two very different methodological approaches. It will be required reading for scholars in the field."—Miguel Centeno, Princeton University