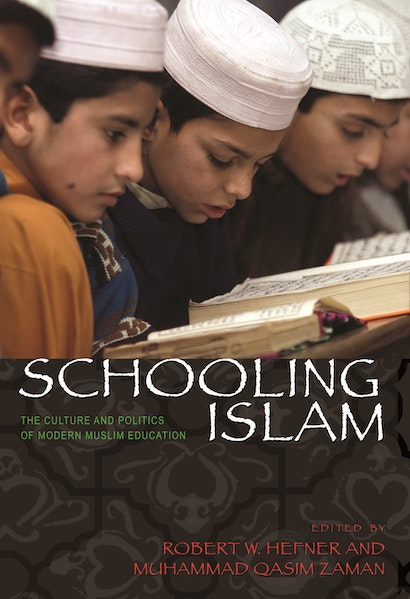 Since the Taliban seized Kabul in 1996, the public has grappled with the relationship between Islamic education and radical Islam. Media reports tend to paint madrasas — religious schools dedicated to Islamic learning — as medieval institutions opposed to all that is Western and as breeding grounds for terrorists. Others have claimed that without reforms, Islam and the West are doomed to a clash of civilizations.


Robert Hefner and Muhammad Qasim Zaman bring together eleven internationally renowned scholars to examine the varieties of modern Muslim education and their implications for national and global politics. The contributors provide new insights into Muslim culture and politics in countries as different as Morocco, Egypt, Pakistan, India, Indonesia, Iran, and Saudi Arabia. They demonstrate that Islamic education is neither timelessly traditional nor medieval, but rather complex, evolving, and diverse in its institutions and practices. They reveal that a struggle for hearts and minds in Muslim lands started long before the Western media discovered madrasas, and that Islamic schools remain on its front line.

Schooling Islam is the most comprehensive work available in any language on madrasas and Islamic education.

Robert W. Hefner is Director of the Program on Islam and Civil Society at the Institute on Culture and Religious Affairs at Boston University. Muhammad Qasim Zaman is Robert H. Niehaus '77 Professor of Near Eastern Studies and Religion at Princeton University.

"Hefner provides the reader with an excellent historical background which can help in appreciating the scale of the change now taking place in Islamic education, and their implications for public culture and politics. . . . This book is highly recommended for American and European media pundits and politicians to read and be honest with themselves and their constituents about the positive nature of mainstream madrasas throughout the Muslim world, and stop demonizing them, and the education they provide."—Mohammed M. Aman, Ph.D., Digest of Middle East Studies

"This is a major contribution to the field. Over the past twenty years there has been growing public concern about Islamic education in general and Muslim madrasas in particular. The latter have come to be seen as nurturers of Islamic radicalism, indeed, as training centers for jihadi militants and terrorists. This book makes the enormously important point to those who would wish to essentialize Islam or madrasas that Islamic education is profoundly shaped by local contexts as Muslims seek the best possible ways to grasp, live, and communicate a Muslim life."—Francis Robinson, Royal Holloway, University of London

"This book is outstanding in the breadth and maturity of scholarship it assembles on a subject of surpassing importance at once academically and in the wider world of public policy. The editors and contributors lay out a thought-provoking set of studies of educational practices, institutions, intellectual content, and debates about the past, present, and likely futures of Islamic education. The richness of these accounts should put paid to scholarly as well as political stereotyping of Islamic education—from the shibboleths of 'rote learning' to the association of madrasa with terrorism. This book is a must read for all scholars and researchers on Islam."—Jon W. Anderson, Catholic University of America